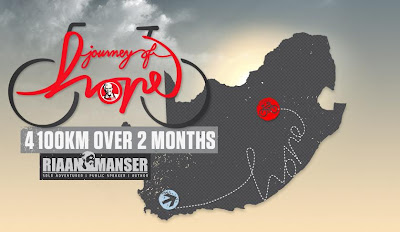 KFC is undoubtedly one of South Africa's favourite fast food franchise, with outlets nationwide all making that delicious crispy fried chicken just the way the Colonel used to. Now although they're mostly noted for the food, locally KFC have been running a campaign for a while, a campaign known as "add hope". Add hope is a national feeding program which ensures children have access to nutrition in order to live, grow and thrive. How can one be a part of this? Simple, after placing your order at any KFC, you can donate R2 towards this cause by adding it to your bill. Your R2 can go a long way to feeding the less fortunate.

Recently KFC partnered up with renowned South African adventurer Riaan Manser to help feed South Africa's children. In September he embarked on his journey, an epic adventure to cycle the country and his route will read the message of "hope". In total Riaan would travel 4100km in 2 months, stopping off in many towns along the way to highlight both, the plight of hunger and the positive impact that Add Hope is making to the countries children. This Friday, the 19th of October see's him making a stop in Durban at the North Beach KFC, situated in the Mangrove Beach Center on Somtsea Road at 9am. Come join in and support Riaan in his inspiring journey across the country, to better the lives of the children. You together with KFC, Riaan and the Add Hope campaign can help a nation prosper. 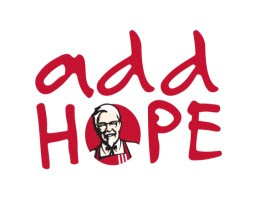