Bucket Seat: A weekend with the i3 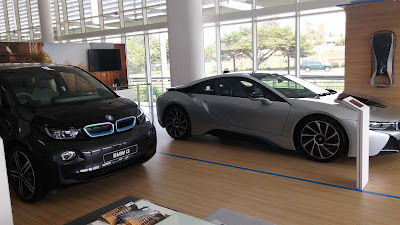 When BMW launched their i Range in the country earlier this year, it issued a new era in motoring. Whilst many were accustomed to the hybrids, the mere thought of having a car that ran purely on electricity was a bit daunting especially with the energy crisis and the limited range that these vehicles could do. The concept behind these cars was never for long distance commutes though, with the strict regulations in most European countries with regards to C02 emissions and congestion charges for major cities, cars like the i3 were developed for these particular reasons. In essence, it is a city car, with zero emissions, practical and compact in design whilst remaining stylish, spacious and affording the driver and their passengers all the comforts we've come accustomed to in cars today. 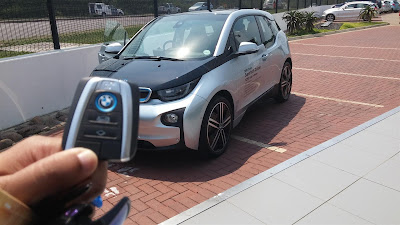 This past weekend the guys down at Supertech Durban offered me an i3 Bev to zoom around town in, it was an offer I couldn't turn down as I did drive one during the local launch but the real test was spending a few days with the car. For those who don't know much about the Supertech Dealership, it is KZN's only BMWi dealer, located at 8 Cliff Crescent, on the corner of Solomon Mahlangu Drive (Edwin Swales) and Vusi Mzimele Road (Bellair Rd). It is one of the countries biggest BMW dealerships and boasts one of the best sales figures. The Showroom was the first in the country to have  a dedicated M car showroom with tar flooring and racing design, as well incorporating interactive executive lounges where customers can customize their ideal BMW whilst watching it take shape on a giant LCD TV. This is part of Future Retail, a concept designed by BMW as a means to enhance the customer dealership experience. The Isetta Bar located in the dealership has a full restaurant menu and some of the best coffee I've had! Supertech Durban, falls under the Supertech Group, which consist of the Durban as well as Newcastle dealership. The Group prides themselves on service excellence which is testament to the awards they win. Supertech Durban was also recently awarded a 4 Star Green star rating, and being an i-dealer, its testament to their commitment to sustainability and eco-friendly living. 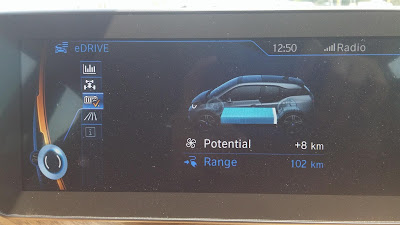 Once the keys to the i3 were handed over to me and was given a quick brief about the car, it was time to hit the road. When I say this car is nothing like you have ever driven before, I mean it, everything about it is magical as it's relatively new to you. Firstly, the silence, with no combustion engine present there is zero noise, the only noise you will hear is that of the wind resistance. Next up, the design, BMW have kept the design as close to the concept as possible, with futuristic lines and massive wheels (20"), it looks like a driving concept on the road. The interior follows that trend with clean lines, spacious cabin and a dash that's straight out of the future with 2 LCD screens giving the driver all the info needed. 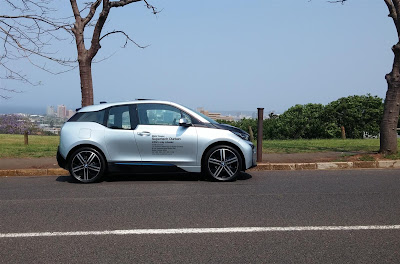 With the i3 being battery powered, you may get range anxiety like I did the first time driving it. Many would start panicking when they see the range in their car say "100km" as that means their tank is running dry but with the i3 in comfort mode, that is all the range you get! Also with the depleting battery, you tend to want to head home soon as you can to start charging it again but the more time you spend in the car, the more you figure out the workings behind it. With the kinetic energy build up whilst slowing down, the car is able to regenerate power, so the more you drive and slow down, the more battery life you build up. It almost becomes like a game and that is where the city car aspect comes to it. If you're going to drive on a motor way at a constant speed, that is when you're going to use up the most power and not get a good range to your charge but if you take a drive to the suburbs with stop streets and traffic lights, you might end up reaching your destination with a higher range than what you started off with! 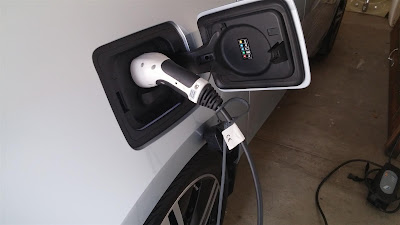 I say it's like a game but in essence the car forces you to become a better driver, even though for it's size and odd shape, it's no slouch. It has a top speed of 160kph and one can obtain it very quickly thanks to the electric motor output of 125kW and 250Nm of torque, couple that with the overall weight of just over a ton, thanks to the light weight shell that is manufactured in a special carbon fiber weave and the interior made from special light weight and recycled materials, the only real weight to the car is from the batteries of which that and the electric drive train along with the wheels, form one part of the car and the cabin and shell make up the second part. 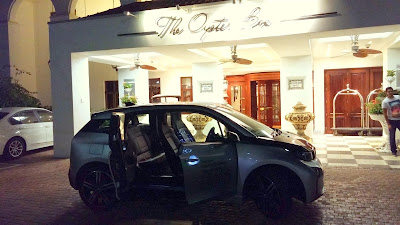 Driving the i3 is not just an experience for the driver but for on lookers too. It's nothing like you've seen before so it will attract a lot of attention anywhere you go. I took it to some of Durban's hot spots just to see the general reaction from the public and I had a lot of positive feedback from people, many didn't know that it was available in the country and most were astonished that someone would actually drive one. That is what I feel needs to change, the overall mindset of the consumer, 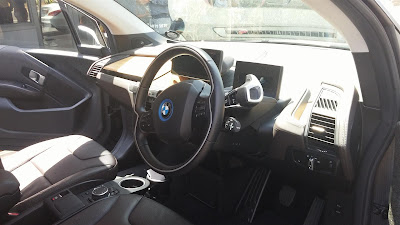 Many might be thinking, why would I pay that much money for a car like this? I'm not going to lie, it is pretty expensive but if one has to look at the average Golf driver in Durban, now if you live in Durban you would know that they are more GTI's and R's on the roads than TSI's, both of those are over 500K, both give you at most 400km on a tank of fuel if you're lucky. The BMW i3 isn't much more than that in costs but costs you a fraction in terms of refueling. A single charge for the i3 from 0% to 100% will cost you on average R25 and depending on your driving style and mode, the range will vary from 100km to 140km. There are 3 driving modes to the car, Comfort mode offers you a top speed of 150kph, which we aren't allowed to do on any of our roads so no need to worry about that. The two Eco modes are Eco Pro and Eco Pro+, with the latter being there if you really want to push the cars range to the limits whilst letting go of things like climate control and succumbing to a top speed of 90kph. 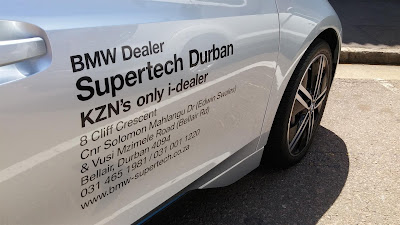 With Europe already taken to electric vehicles, there are many public charge facilities in place, we in South Africa have some way to go to get up to that level but we are not far off. During my time with the i3, one of the places I visited was the Oyster Box Hotel in Umhlanga, to my surprise one of the guards came running up to me as I entered, now with it already drawing attention wherever I went I thought it was just another person that wanted to see the car but in actual fact, he came to tell me that they have a dedicated bay for electric cars, complete with a plug point so I could charge the car while I enjoy my dinner. Best part about it, it was free! Then again with the minimal cost of charging the car, it would be pointless to charge someone for this service. Other places in Durban that have charging facilities are Gateway Shopping Center and I've heard that the Pavilion Shopping center will be adding a few to their latest wing of renovations. So the market is adapting to it and you won't be caught off guard should you require a top up. 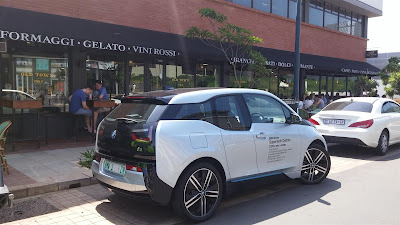 There are 3 charging methods for the car, the first is the conventional 3 -pin wall socket that you have at home, it works well but the charge time is pretty long, as I said takes up to 7 hours to fully charge it. There is an option to get a BMW Wallbox installed at your place of residence which reduces charging time by almost half, so 3 hours max and you're ready to roll and the last option is the DC charger which can be found at any BMW i-dealer. With the direct current option, charging takes 20 minutes, it is on this basis that they're working on rolling out DC charging points around the cities, I know Sandton BMW have installed one in Melrose Arch along with their new BMWi showroom. 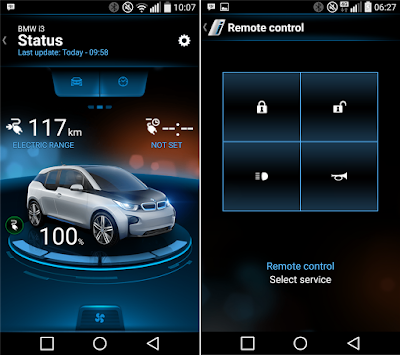 The car comes equipped with everything one would find in any normal car, climate control air-conditioning, BMW's connected drive with on call support. Bluetooth functionality, satellite navigation and leather seats. The cabin is extremely spacious and can seat 4 adults comfortably, I even squeezed in 5 during my time with it. The suicide style rear doors make getting in and out very easy for the passengers, apart from making the car look cool. Another great feature to it was the BMWi Remote app which I was able to download onto my cellphone. It gave me info such as the amount of battery life I had left on the car as well as charging times. I could even preset the aircon should I want the car cooled before I got in. Other things you can do with the remote app is unlock the car, hoot and switch on the lights should you for some reason can't find it in a parking lot. 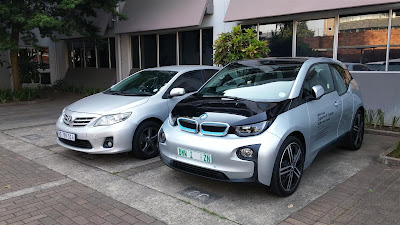 Overall it was an eye opening experience, I always thought of a battery operated car as a kid and here it is in production and on the roads. With the ever rising of the oil price and the damage caused by fossil fuels, this is the future of motoring. In time, the price of vehicles such as the i3 will come down as the demand for them increases, it's simple economics. The biggest challenge manufacturers like BMW will have is getting people to break their fear and actually experience what the car has to offer to which they will be pleasantly surprised like I was. 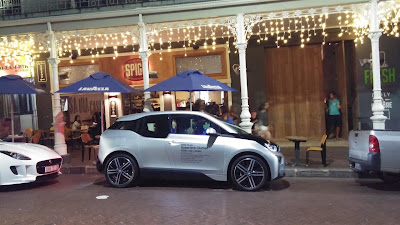 You can follow Supertech Durban on their various social media channels,