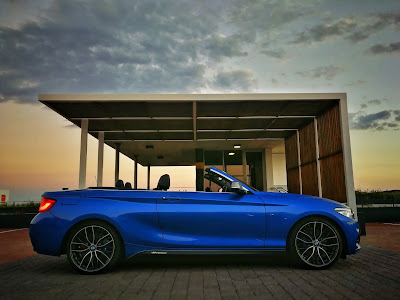 The last time I got a convertible on test, I either had really bad karma or the weather God's really hated me, as for the full seven days in which I had the car, Durban had been experiencing torrential downpours for a week! But all was not lost, there was a brief 4 hours of sunshine in which I had to drop the top and take some pictures but then it was back to rain again after that. Now with this in mind, when I heard I was getting another convertible from BMW, I did some prayers to the weather God's, asked them nicely not to rain on my parade again, and to much of my surprise, they obliged! So here's how my week with the revised BMW 2 series convertible went. 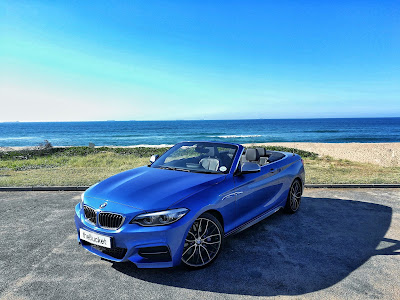 Now I've covered the bases on whats new with the revised BMW 2 Series when I had the 220d M Sport earlier in the year, hexagonal LED headlamps, etc, now with the convertible much of it is the same but I didn't have no run of the mill car, it was the range topping M240i and it came fitted with all of BMW's M Performance parts, to say the car looked menacing is an understatement! Painted in the much loved Estoril Blue, fitted with 19" M Sport multi-spoke rims with blue calipers, it certainly had heads turning as I drove around, whether the roof was up or down. If the looks didn't catch their attention, the crackle from the the twin tail pipes as I flew past them definitely did. This car is loud in every way, and I was loving it! The BMW M Performance parts adds a very different dynamic to the car, apart from making it look sporty, it adds character and flamboyance with the break in colour and this particular set of rims with the bi-colour scheme in jet black accentuated the style. On the interior, there wasn't much difference to speak off, apart from the cool brushed aluminium look you get with the M Sport package. Now the main highlight of this car is the roof, and while I'm not the biggest fan of a soft top, I learned to appreciate it much more especially with this car in particular. 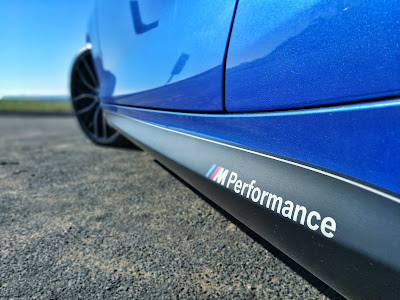 Having driven the 340i before, I had sort of impression of what to expect with this one, but I was wrong, very wrong. The 2 Series is an entirely different car to the 3 Series, its lower, smaller, more agile and lighter, which makes you want to push the limits...in a safe manner that is, around all the bends and twists you may encounter, then when the road opens up, its time to unleash all 250kW of power, with the 500Nm ripping the tarmac along the way. 0-100km happens in a blink of an eye, and the musical notes that the exhaust sings just makes you want to keep carrying on! The 3-litre engine in the M240i is truly magnificent and if you a lover of the 2 Series, this is as close to an M2 convertible you're going to get! While it may not have the same power output as the M2, it still is a lot of fun to drive, and the plus side you can drop the roof when the sun is out. Now getting to that aspect, I said I wasn't a big fan of the soft top, while I have driven BMW's hardtop convertible offerings, the weight added by the roof has an astounding impact on driving dynamics, whether its up or down, with this, I couldn't feel a difference! Apart from the hurricane going through my hair when the roof was down. Mind you, when you do drop the roof, it's nice to flick the car into Eco-Pro mode, it tames the motor down a bit, giving you enough power but rather lets you enjoy the drive with the world all around you. 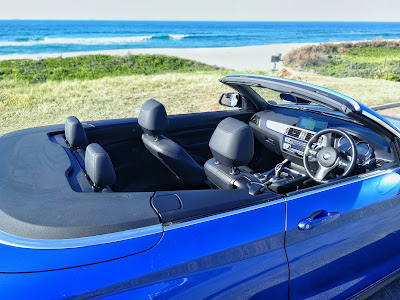 When it comes to Coupes, I'm not the biggest fan, sure it looks great but those long doors only work well when you have tonnes of space either side of you. Don't understand what I'm saying? Well go park a coupe in a busy mall parking lot and let one idiot park as close as possible next to you. You'll be doing all sorts of yoga moves trying to get in. Then there's the seating position, it's coupe so it has to be low, but being a tall guy I need the seat more lower than normal which is fine while driving but getting out does become a bit of a strenuous activity. Now since I'm done complaining like an old man, everything else about the cars comfort is sublime. It's BMW in a nutshell, no matter what car you driving, what size rims you have, what setting you have the suspension in, the car tries it's best to give you that smooth ride. Yes with this one you can feel the odd bump here and there but you honestly don't care because you're having so much fun driving it. With the roof down it's much of the same, I didn't even use the air-net given since I had a passenger sitting in the back (with no complaints about space might I add), and the wind noise wasn't and issue. 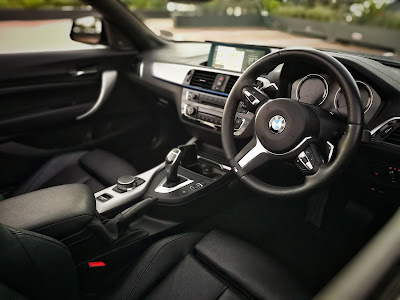 The revised 2 Series comes with the new lit up instrument cluster, not as fancy as the full digital ones we see in the 3 Series on-wards where the dials change colour in respect to your driving mode. The car does come with the new HD infotainment screen and has the upgraded tile format menu system. The car had the basics like PDC's and reverse camera but the light package really illuminated the car at night and justified it's price tag. I cannot preach more about BMW's adaptive LED light package with high beam assist. it works like magic and while I know many other manufacturers have this option too, I've seen it work the best with BMW. 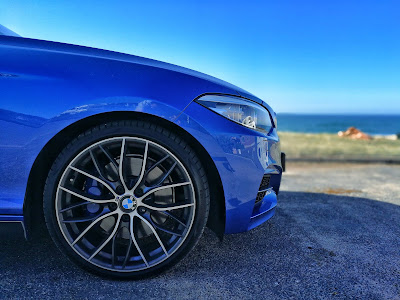 It's this part of the review where I give you a break down on my pros and cons of the car, why you should buy it and what to look forward to. Also what works well and what doesn't but with this but lets me honest, if you got the money to buy a car like this, just do yourselves a favour and do it. No matter what minor things I did or did not like about the car evaporates once you press that start button. The car will leave you breathless in more than one instance. It's pure fun and it will be difficult to wipe that smirk off your face every time you know you have to drive. With my last experience of a convertible, having rained for 90% of the time I had it, this one I maximised driving with the roof down, every damn opportunity I had, it was down and I was loving it! 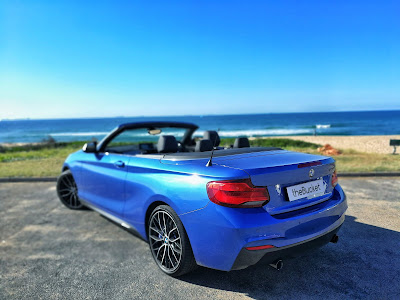