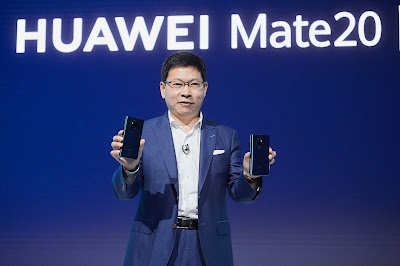 A higher intelligence has arrived,and it's in the form of the Huawei Mate 20. Launched at yesterdays glamorous event in London, Huawei Mobile showcased to the world it's Mate 20 and Mate 20 Pro devices. This devices brings with it a whole lot of worlds firsts, with it having the worlds fastest processor in the Kirin 980 which takes AI to the next level and EMUI 9. With the local launch happening next week, I'm not going to divulge too much into the phone in this post but rather cover some key aspects of the device, well to be honest most of the features displayed yesterday were rather interesting and mind blowing at the same time, so lets get down to discussing some of them.

First up, the design, nothing over the top from Huawei, keeping in general to what every smart phone looks like these days but the significant design difference has to be the bevel design. It's much wider than most phones giving the device a more rounded edge and with the unique cut design on the back giving the user more grip with the device. It also serves as an anti-slip mechanism which many other phones become quite slippery with moisture. The screen on the Huawei Mate 20 is brilliant, whether its the normal or pro you're looking at, with all devices carrying a FullView display with high screen-to-body ratio and a small notch at the top compared to other smartphones. The Mate also has a LCD display with a peculiar 18.7:9 aspect ratio and Huawei claim this is the brightest display on the market. The Mate20 also boasts an in screen finger print reader, one of the few devices on the market to have this feature.

Another big talking point was the battery life on the Mate20, Huawei's Mate range has been known for its strong battery and with the Mate20 there it is no different. With it coming with a 4200mAh battery which supporter Huawei's new 40W SuperCharge which is the fastest charging phone on the market, capable of charging the device from 0-70% in just 30 minutes. If that wasn't enough, Huawei finally have come to the wireless charging party, with a 15W wireless charge which is also quite fast. But here's the kicker than had my mind blown, the Mate20 also has reverse wireless charge. What's that? Well if you have another device that can charge wireless-ly, be it a phone, car key etc, you can now charge it using your Mate20!

Giving you the gift of time. With the 40W SuperCharge, you can have 70% battery power in just 30 minutes. #HUAWEIMate20 #HigherIntelligence pic.twitter.com/RKh4HbijXy
— Huawei Mobile (@HuaweiMobile) October 16, 2018


As I said, I'm not going to chat too much about the device until I get to see it for myself next week at the local launch but so this is looking like bang on the money. Like Richard Yu, the CEO of Huawei Consumer BG said "Smartphones are an important entrance to the digital world. The Huawei Mate 20 Series is designed to be the best 'mate' of consumers, accompanying and empowering them to enjoy a richer, more fulfilled life with their higher intelligence, unparalleled battery lives and powerful camera performance". I often get asked, "what is the best phone on the market" and of recent I couldn't really give a proper answer because in reality there was no best phone, with such minimal things to separate each competitor, either one had an advantage over the other in some way another but with the Mate20, it's clear to say that Huawei are leading the pack on this one.
Posted by Amith at 12:33 PM