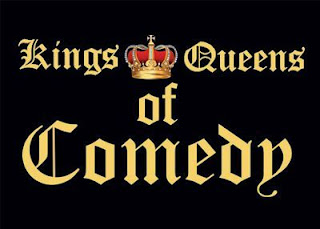 One of SA's longest standing comedy tour is back to bring a night of royal laughter, yes that's right, Kings and Queens of Comedy returns to Durban in 2019 and as always, has a host of SA's funniest on stage comics to keep you in hysterics all night long. Taking place at Durban's ICC on the 16th of February, you can look forward to some of SA's comedy giants which include Angel Campy, Carvin Goldstone, Muthu Murugan, Ndumiso Linidi, Riaad Moosa, Schalk Bezuidenhout, Tumi Morake and SA's favourite ventriloquist, Conrad Koch and Chester Missing. MC for the night is everyone favourite radio DJ, Darren Maule.  There will also be some new faces joining the Kings and Queens of Comedy family, Thenjiwe Mosely, Mo Vawda and Lindy Johnson. While they maybe new to the franchise they're aren't new to the comedy scene. 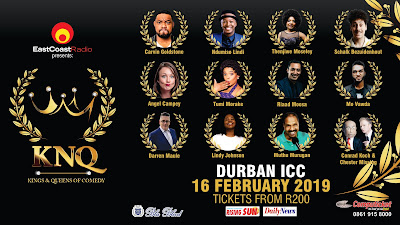 In now its 7th year running, the Kings and Queens of Comedy brought you by Blu Blood started off in Johannesburg in 2012 and now has grown to be one of the leading comedy brands in South Africa, promoting and showcasing local talent from around the country. The show is rated PG16 and tickets are on sale from Computicket, starting from R200.

Kings and Queens of Comedy production is brought to you by Blu Blood and East Coast Radio.
Posted by Amith at 12:10 PM