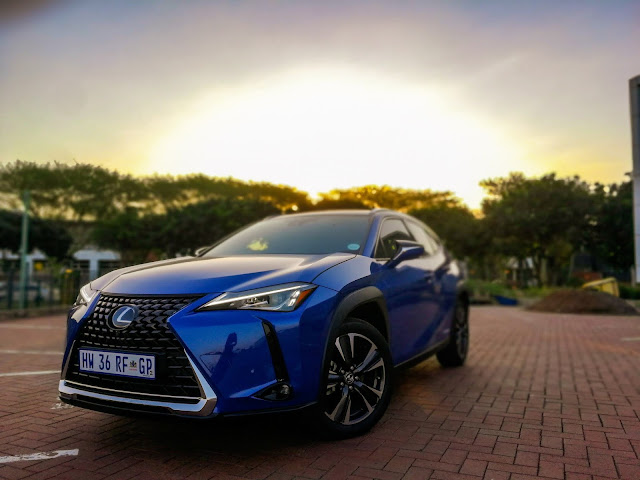 One of my very first test cars was a hybrid and I can't believe it's been almost six years till I got another one to test. Yes in that time I've had electric and 'mild hybrid' cars but nothing to compare how the tech has come around over time. A few weeks back I got to spend some time with the Lexus UX250h, and I have to say it really was great to see how time has worked so well for this technology. Lexus was one of the first manufacturers to adopt hybrid technology into their production models as apposed to launching a special car for the hybrid drive train. The GS450h was one that I remember and then the LS600h, with Toyota's on going development with their ever popular Prius, you knew the stuff going into the Lexus cars were good. The UX is a rather special model from Lexus as it's the all new small crossover vehicle and it's daring design really makes it a stand out from others in the segment. Having the option of getting a hybrid version makes it stand out even more. 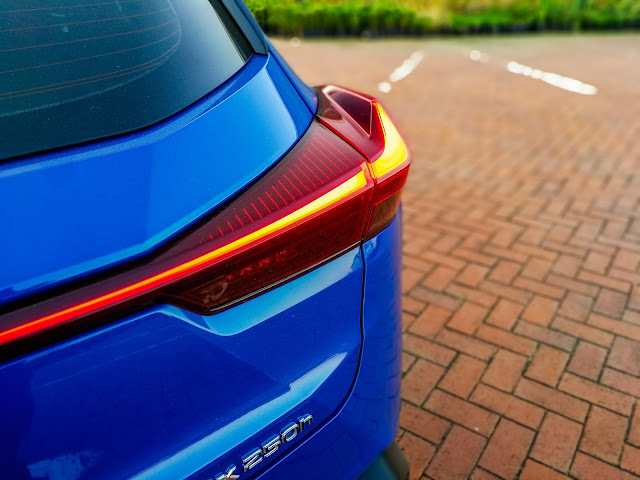 Like mentioned before, the design of the UX is rather special, it incorporates Lexus current design language with the large spindle grille and sharp lines and takes it a step further as you go to the rear. The solid rear light, like a cyclops is a great sight in the dark and if you examine the light close, the way it tucks and folds over the side is pretty neat too. It's the perfect looking baby of the SUV range and Lexus says it dares to challenge the limits of what went before, expanding the limits of what will follow. So safe to say, future designs from Lexus will follow this daring approach and for me that's brilliant because for far too long they've been conservative with their designs. Lexus says the design embraces the Japanese architectural philosophy of engawa, where the exterior and interior seamlessly merge and it's a perfect merge if you ask me. The interior of the UX is a lovely place to be, while the car is an urban crossover, the low seating position and high window line does make you feel cocooned in the cavity of the car. Everything is designed and laid out to perfect, as you would expect from Lexus. 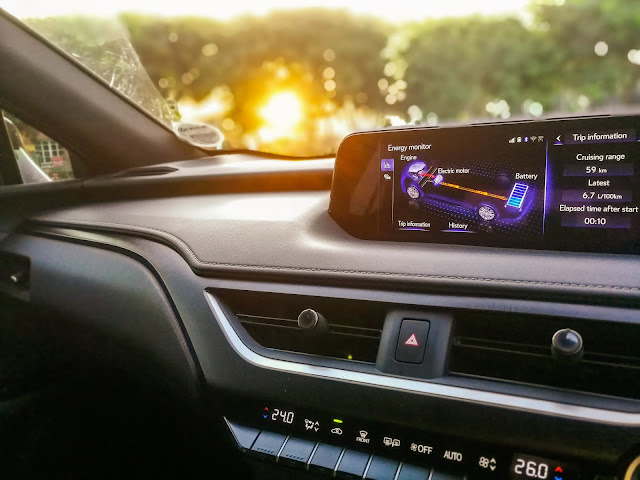 Now this is where I found things interesting driving some of the first gen hybrids, the transition from electric power to combustion power was very evident but with the UX you could hardly tell the difference such is how silent both motors work, whether in sync or one off. I found myself doing a lot of urban trips on pure electric power and when need be, the combustion engine helped the car in difficult aspects of the drive but it was so seamless, you didn't even hear the engine kick in, the only way you would realise it, is due to the on screen animation which shows you where power is being delivered.The petrol engine in the UX250 is a 2L in-line 4 cylinder which produces 107kW and 180Nm of torque, which is much less than the UX200 engine, the rest of the power is made up by the electric motor. A lot of the time the both work in tandem which not only helps deliver more power but makes the car a lot more efficient, whether its driving around town or on the highway.  Now with many other brands coming to the party with hybrids, most of them being the plug-in type but Lexus have developed a remarkable all-new, ultra-modern self charging hybrid technology which is used in the UX250h. It features a cutting edge nickel-metal hydride battery and a sequential shiftmatic gearbox which ensures the changes are at optimal times to limit wastage and eliminates lag with plentiful torque and effortless acceleration. 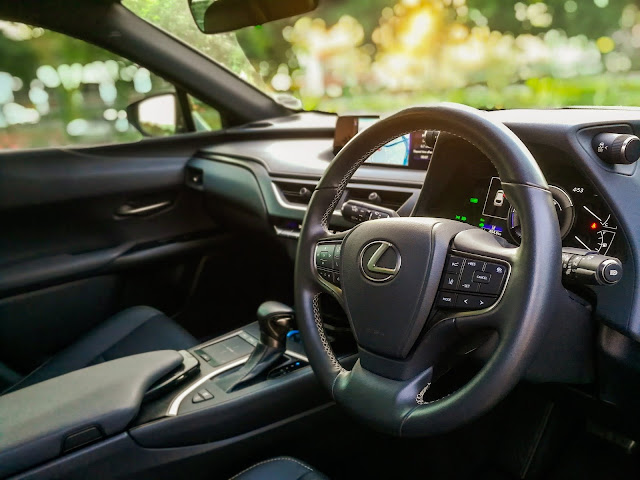 Despite it being the smallest in the crossover range, the UX is rather spacious and with the great quality materials used in the cars interior it makes it all that more comfy. Lexus make use of smooth leather which is inspired by sashiko, a traditional Japanese quilting technique. The design of the seats are rather sport and provides great back support while driving. The driver and front passenger get seat warmers and coolers as well as dual zone climate control, also both driver and passenger seats are fully electric adjustable. Ride quality is brilliant and something you'd expect from Lexus, but what gets you is the silence while driving, apart from the wind noise you have to listen very carefully to hear any of the engine which always remains one of the top priorities for the brand. The back seats are pretty comfortable as well with the bucket seat style fitting two adults without a squeeze. 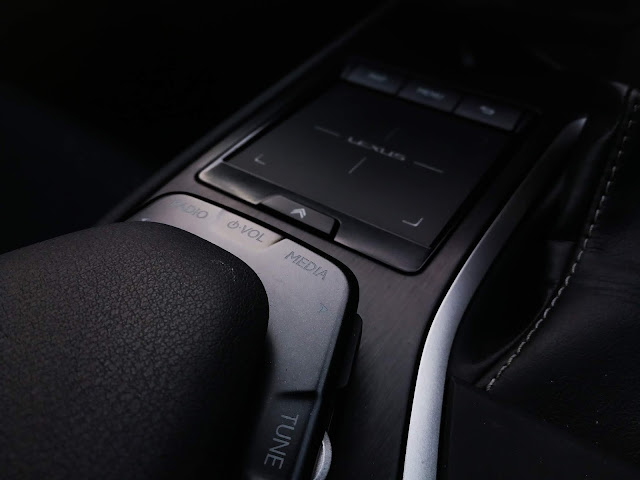 I was blown away with the amount of tech in the UX, from the start-up sequence on both your digital instrument panel and the TFT multi info display it feels like you just started up a space ship. On the outside, some of the key highlights are the adaptive high-beam lights which automatically adjust when you're driving on extra dark areas and shine away from oncoming traffic. It has a hands-free power tailgate which opens the boot by you placing your foot under the rear bumper (key has to be on you for this to work). The funky rear lights? they serve as an aero stablizer for the car.  Driving support systems include park distance control and park assist which features a mind blowing 360 camera view of when the car is parked, lane departure alert, traction control, Lexus safety system+ which include driver distance control and alerts you of any obstacles in front of the car. On the inside, you have a 13 speaker Mark Levinson surround sound system which is brilliant if you ask me. It adjusts to suite any type of music you're listening to. It has a wireless charging mat, built in sat-nav which is very easy to use. The Lexus infotainment menu is much easier to use, even with the weird track pad, it works well. The Lexus UX250h blew my assumptions away about the future of hybrid electric vehicles, the progress made by them and the synergy of the two engines working together to give the driver an optimal driving experience is simply beautiful. What they've managed to do n the marriage of the two power plants is magic, they help each other out more than you think and the result is great economical driving with a massively reducing carbon footprint. The brilliance is that you get all of this in a normal production car, nothing fancy like a special model made from special materials etc, which negates the high costs of other vehicles in the market. The Lexus UX250h definitely paves the way for other vehicles like it and is a big winner in my books. 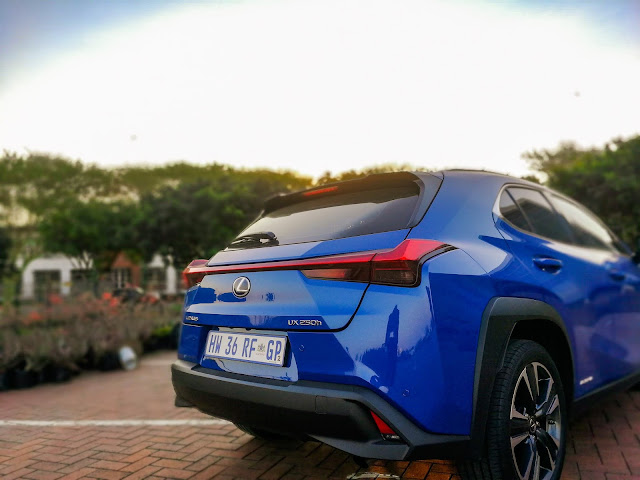