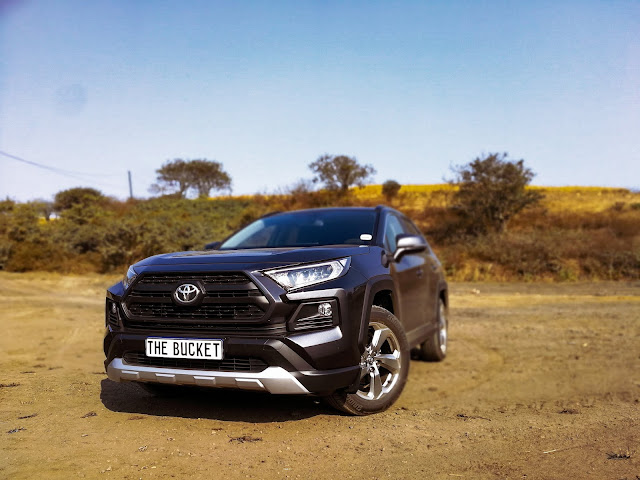 Toyota's ever popular RAV4 model has been revitalized in shape, size and presence. Toyota's first compact SUV offering which debuted in 1994 has always been a favourite amongst  the buyers as it offered the reliability of a Toyota and the versatility of an SUV. While many may label the previous models of the RAV4 dull and boring, at the end of the day, it served it's purpose and still got them sales. This latest offering has ruffled many feathers in the motoring world, in the right way, Toyota's progressive design language has been transpired into this new model and blew many away when it was first introduced. It broke the mold of the designs of old and is more progressive, more in line of the market trends and in fairness, very unlike Toyota at all, which isn't a bad thing. I spent a week with the all-wheel-drive GX-R and can see why I'm seeing so many on the road. 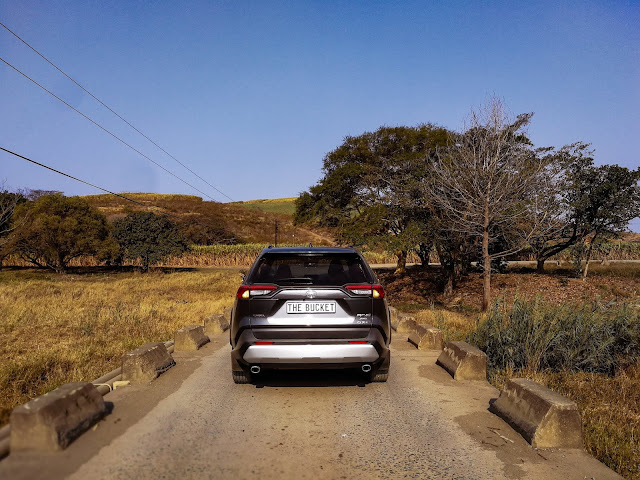 I've already spoken at length at how great this design is, but to focus on the details, the overall design is very boxy but dynamic, it's edges are pronounced and add character to the overall design. The creases on the side add that bulk to the car as its more accentuated near the wheel arches. The arches themselves are rigid and modular as appose to round which follow the lines of the car perfectly. As you head to the back, the lights follow the lines of the design and while it may look a tad bit generic, Toyota have added elements to make it unmistakably theirs. I like the uses of the scuff guards in a matte silver finish, again gives the RAV that beefy off road presence. The interior really surprised me, really targeting the younger market with the funky style center and the use of neon colours and extra storage spaces. Everything is designed well and looks the part. 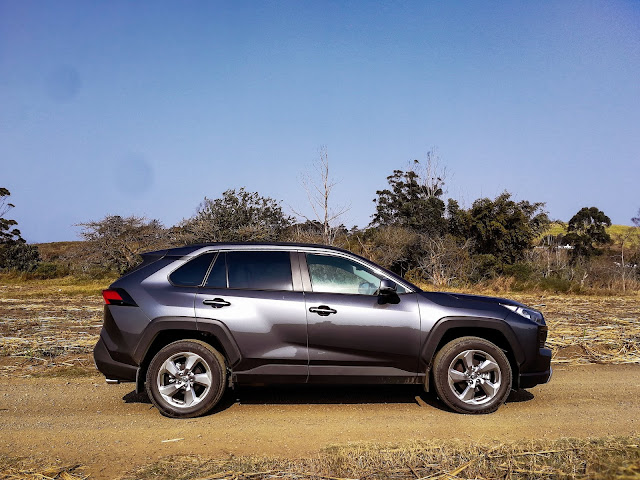 The RAV4 GX-R is powered by a 2.0L naturally aspirated 16V (VVT-IE)  petrol engine with CVT transmission. Now I know many hate that word with a passion, and with Toyota, they never had much success with this gearbox as many feels it does kill the engine performance which I agree on, in the older models but truth be told, I didn't really find that the case in this one. Hear me out on this now, I drove this car after just coming off the Audi RS5 Sportback so to sit in something less menacing would normally be an anticlimax of note but on the drive home I actually appreciated how well this car worked. The engine produces 127kW of power with a maximum torque figure of 203Nm but with driving it in the Eco driving mode, it reduced the revs to under 2000rpm and it was plentiful to coast home at 120kph on the freeway. I was blown away when I saw the rev counter sitting under 2000, I gave it a gentle tap a few times to make sure it wasn't broken! Yes when you have to put your foot down, then the old CVT groan comes about but with the option of a Sport mode coupled with the paddle shift, you can eliminate that quickly and get the power you want, when you want it. The car has an all-wheel drive offering, which is pretty simple to use, but use of the toggle switch next to the gear selector. It's pretty straight forward as you just choose what surface you're driving on and the car will do the rest, to disengage from that setting, simple push the toggle down and you're back to normal. I took the GX-R on some gravel roads as well as soft sand both of which it coped like a pro, even better than some 4x4's I've had in the past. 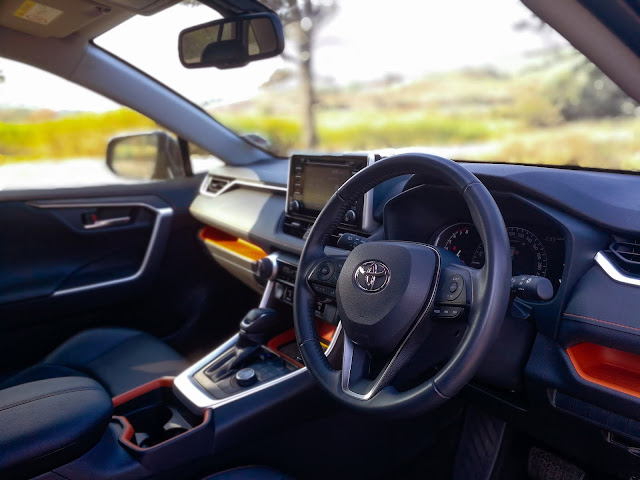 As mentioned, the car has grown since its predecessor, it does look lower in stance but the heights are almost the same. On the inside, it's very roomy, as there is plentiful head height and the full leather interior makes things extra comfy. What I like about the interior design is the attention to detail Toyota paid to in almost every aspect. The front seats are almost racing styled like in design with two tone stitching and detailed in the center. The use of the same soft touch leather is continued around the cabin, making everything feel great. There's good use of rubber in the storage areas making sure that it's a non-slip surface. The back is also super comfy and has decent leg room for adults, the bench style seat can have you seat 3 people without much discomfort. The car has dual zone climate control and vents in the back for the rear passengers. The RAV4 has decent luggage space as well, with you comfortably getting a set of golf clubs in, without much effort. 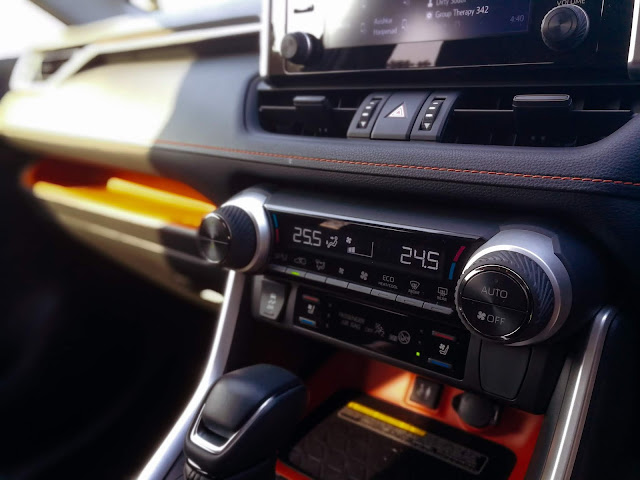 This is one point I don't normally speak much about from Toyota but hey, this one warrants it! The RAV4 has tonnes of tech, when I say tonnes of tech, I mean a lot for Toyota's standards. Half the instrument cluster is digital displays a host of information about the car, your driving style, and entertainment info. There's controls on the steering wheel to scroll through all of these and more. The large infotainment screen is touch screen but features the same basic OS as from the previous generation Corolla, while it doesn't have apps like Apple Car Play and Android Auto, it does offer screen mirroring which I couldn't for the life of me figure out how to get working. I hope there is an update to this as it's a shame the car doesn't come with the mobile car apps. There is a wireless charging mat, which is a non slip surface so your device won't go sliding around and there's two USB ports for you to plug in devices. Both front occupants get heating and cooling seats, which is pretty cool. The car did not have a sunroof or automatic tailgate function but I think it is offered as an optional extra. 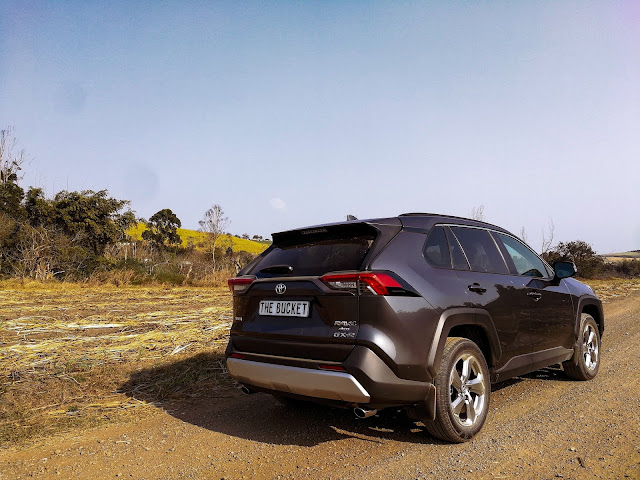 Overall the RAV4 has made a massive step up and it was needed, given the competition in the segment has heated up. While it might have been one of the first compact SUV's on the market, Toyota could not sit back and rely on sales through brand loyalty and reputation, the consumer wants more and with others offering more they had to as well. It's a change in the right direction for one of the biggest manufacturers in the world and one that just could start to sway the younger generation again. It's an attractive looking car, very economical, has more of the bells and whistles and a car that is suited to various lifestyles. 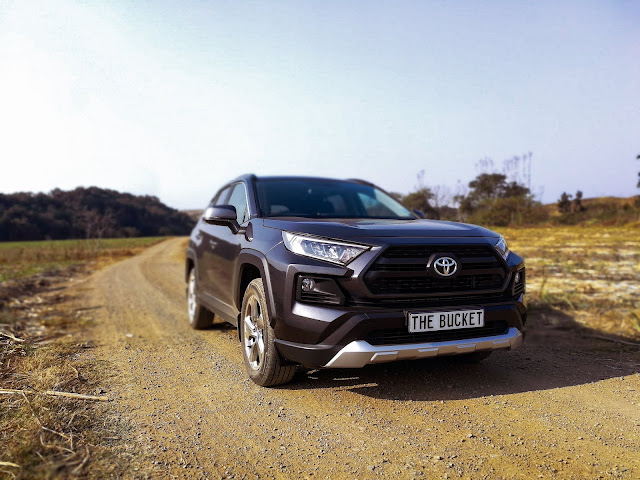