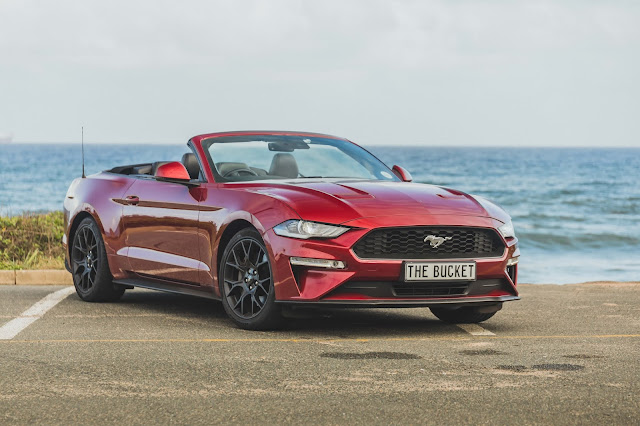 Ever since Ford launched their Mustang locally back in 2016, I've been dying to get behind this iconic American sports coupe. There's no denying the heritage and legacy that comes with the Mustang, we've seen it in movies, TV shows. It's easily one of the most recognizable cars in the world and when Ford South Africa deciding to bring this much loved model to the country, many enthusiasts were keen to see what it was all about. The Mustang was launched with two engine variants, the monstrous 5.0 V8 and the 2.3 Ecoboost engine, now many snubbed the smaller engine saying it doesn't live up to what a Mustang is, that raw American V8 power and while I can understand their point, the 2.3 Ecoboost isn't any slouch as this was the same engine that powered the manic Ford Focus RS. After waiting and praying to drive one, my prayers were finally answered last month as I got to spend a few days with the Ford Mustang Convertible, it was the 2.3 Ecoboost but I was not phased as it was my first Mustang and I was excited like a kid on Christmas morning to get behind the wheel. 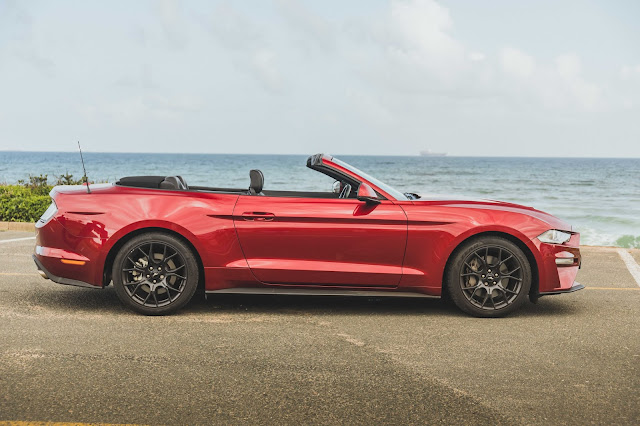 This is the face-lift model of the Mustang that was launched here in 2016, the overall design remains unchanged with subtle enhancements made to the front end, with the lights given more detail and presence than previous. The car is a looker, whether the top is on or off, it gets peoples heads turning. Looking stylish in Lucid Metallic Red, with blacked out Luster Nickel 19" rims, there was no denying that this car looked good. This car is a modern interpretation of the Mustangs of the past and you can make out the iconic design styles as you walk around the car, with the long hood, low stance and wide body, Ford have done an exceptional job on this design. There really isn't a bad angle to this car, trust me, over the four days I had it, I checked, even by the number of strangers that complimented me on the car, it was apparent that it was a firm favourite for many. Moving on the inside, the design remains unchanged with almost the exact same setup as the previous model, what I did like about the convertible is that with the roof open or closed, the luggage space was not compromised, the one thing that did annoy me was the coverings for the exposed sides with the roof down, which was a mission to attach so I just left them off. Now the main thing that will get people about this particular model is the engine, as mentioned it does come with the 2.3L Ecoboost motor which is no dud, while it not be classified as "American Muscle" this motor does punch out 213kW and 441Nm of torque. That is impressive numbers, the one downfall to all this is probably the gearbox. The Mustang comes with a 10-speed automatic box which in my opinion is too many gears! While I understand why the V8 motor might need that many gears, for me the Ecoboost would have been so much better with an 8-speed box. On take off the car is a bit front heavy and the gearbox does go in a bit of a shock mode if you floor it, all that torque, power taking its time to come through does have you sitting and contemplating if you're ever going to get going but once you do, trust me you definitely going! This issue was when driving in normal mode, pop it into sport mode and it gets a bit more responsive and it even has a drag race mode which completely takes away all those issues but this is obviously for a straight line boost. Having a car like this with a weekend called for a Sunday breakfast run, something which Im glad I did as this car definitely proved its worth, navigating on the windy roads of the KZN North Coast, I really felt at ease with the Mustang, the heavy chassis kept the car planted, the power delivery was spot on when exiting corners and the breaks were superb. Having a cloth roof didn't even have a major impact on handling or cabin noise but the part that really put a smile on my face was this car taming a Porsche Boxster on the run and that really gave me a new found respect to it. 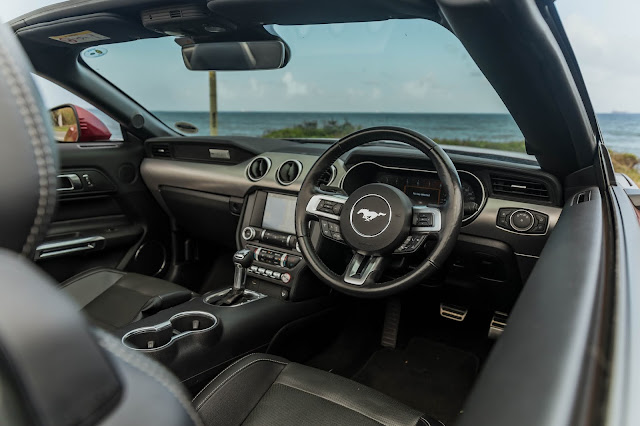 Anyone who knows me, would know I hate driving with the sunroof open or the roof down as I get annoyed with the sun very quickly but with this car, the sun didn't bother me one bit. Every opportunity I got, the roof was coming down for my drive and if it was hot, the climate control helped blow some cool air on me to keep me in comfort, side note- I did get some sunburn while doing this so remember to use sunscreen! With the car having such a low ride height, you'd think this will make things a bit awkward for tall people, not so though, there was ample space for me to be behind the wheel and the seats were super comfy and also had a heater function, though with my seat pushed back to accommodate my long legs, this meant the rear passenger seats served no purpose apart from storing extra shopping. I did manage to get four adults in the car but can't really say it was comfortable for any of us but I guess just being in a Mustang helped us keep our mind off the discomfort. Other creature comforts in the Mustang is the large infotainment screen with Ford Sync 3 which has Android Auto and Apple Car Play, it also came with a Bang & Olufsen Sound System with a 12" sub woofer in the trunk! As an Indian guy this pleased me a lot, I mean a drop top with a cracking sound system?! Who needed a V8 when all you are going to do is cruise along the coast blasting the tunes? 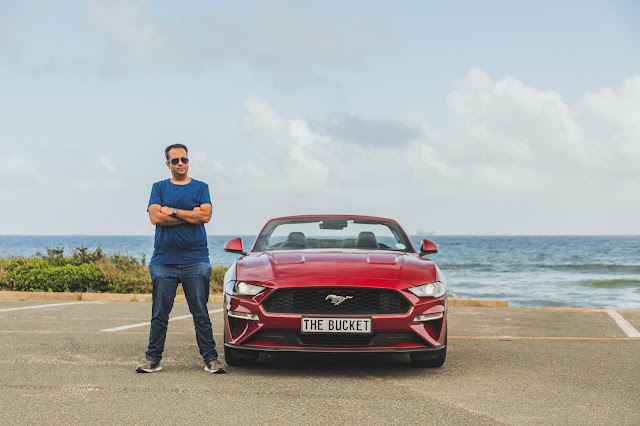 Overall, there's not much to say besides, IT'S A MUSTANG! Yes. its big, yes its in your face but that is what Mustangs are meant to be. If you want something modest, go buy a Corolla. It was my first drive in a Mustang and it lived up to everything I hoped it would. The fine mix of technology with the old is also great, which doesn't stray too much away from the legacy of the American icon. The styling is on point with great looks and options for you to choose from and customize the look of your Mustang. It still retains that great heritage and as mentioned, even with the Ecoboost motor, you're still getting quality performance that rivals others in its class. 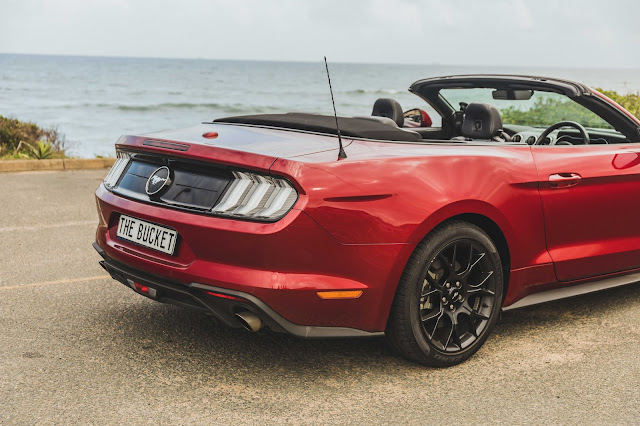