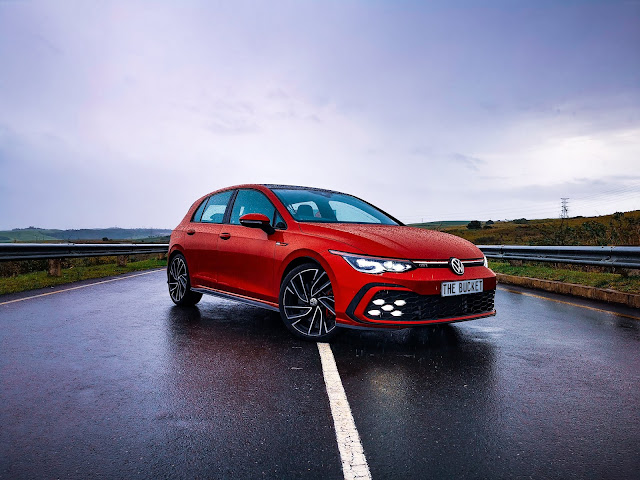 The Golf GTI has for long been a South African favourite, earlier this year I wrote about the Golf 7.5 GTI TCR which funny enough was my first ever GTI that I've driven and boy was that some way to break my GTI virginity. A car that has been synonymous with Durban street culture, the badge has legendary status in this city and in the greater part of this country. It was a performance car in a body of a family hatch back but most importantly, it was affordable. It gave the everyday man a chance to have a car that equals performance of cars that were aimed at a higher pay grade but still had the practicality of being a family run around. The GTI fuses these two molds perfectly and hence it became such a cult figure not only in South Africa but around the globe. There are many special editions that follow in each of the generations but the normal GTI still sets standards for their competitors. Recently I had the opportunity to spend a week behind the wheel of the all new 8th generation of the GTI, here are my thoughts on the latest iteration of it. 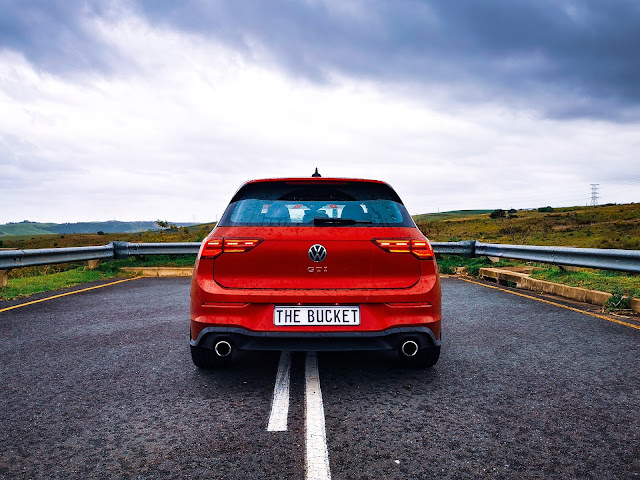 We've seen a trend with modern car design of late, especially from the German's which have drastic change to the norm of what we've pictured a car must look like. While I applaud the creativity and boldness, the design has to make sense and have an appeal. This thing of "it will grow on you" is just another way of saying "you'll get used to it",  that doesn't translate to you finding it attractive, it just means you've settled on it. With the Golf 8, VW have done a stunning job, when pictures were first released of it, the lines were clean and swooped beautifully along the car. The new soft and smooth design approach with curved lights up front, almost like wings, extends along the profile of the car and ties in perfectly at the rear. A bold move by VW was introducing a solid light bar between the headlamps only separated by the emblem. That along with the checkered style fog lamps give the VW Golf 8 GTI a distinct look in the dark. Most of the overall shape of the car still relates to a Golf and hatchback but the sporty touches that VW have added cannot be ignored. That large front honeycomb grille makes it apparent that this is a sports model, the subtle read touches around the body work give it that distinct GTI look. This particular model came with the optional rim choice of 19" Adelaide diamond turned mag-wheels which are great to look at but are a R12,000 extra. Moving onto the interior, VW have made massive strides on their cabin design, opting for the minimalistic approach with and increase of use in technology to navigate your way. Overall, the car is pleasing on the eye from both the outside and the inside. 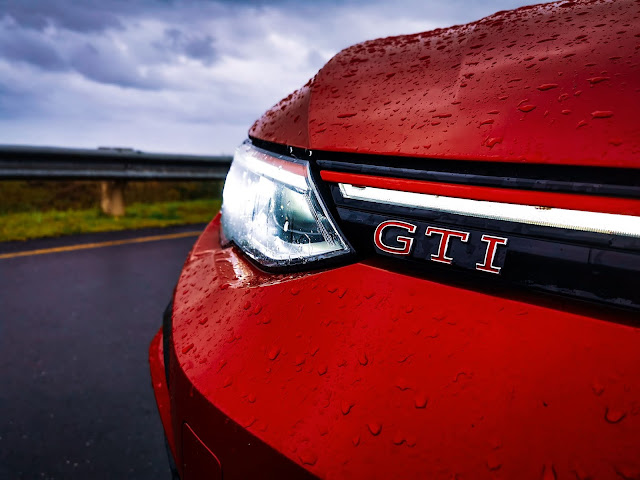 This is what you're hear for, while many have already slated the Golf 8 GTI for not living up to its name as the "Vrrpha". Also there is this other issue that its not particularly faster than its predecessor as they boast similar 0-100km/h times of 6.4 seconds.  So what gives then? Surely a newer version of the car should be faster than the old one? Well lets look at the power unit, just like the 7.5 GTI, it has a 4 cylinder, 2.0L TSI  homogeneous base engine that produces 180kW and 370Nm of torque. That is 11 more kW than the older one but the 7.5 GTI weighed in at 1312Kgs while the 8, while looking sleek and curvaceous has big bones which bring its weight up to 1463Kgs. I doubt all the power is lost just purely on weight issues but I'm sure with other electronic stuff as well but my point is the car is still fast. It's a road legal hatchback, not a rally car. There is no need for you to do 0-100km/h in less than 6 seconds on your way to work (okay maybe if you're really really late) but that only helps so much. What is important is how the engine behaves while driving, the car is equipped with VW's famous dual clutch, 7-speed DSG gearbox which works like a charm with the car. I hardly felt the need to override the automatic gearbox with the paddle shifts as the car is programmed to select the changes at crucial intervals to maximise the best out of the engine. The car doesn't have that throaty sound that we've gotten used to with the 7 and 7.5, the sound is much more subtle but it still sounds great in the cabin. 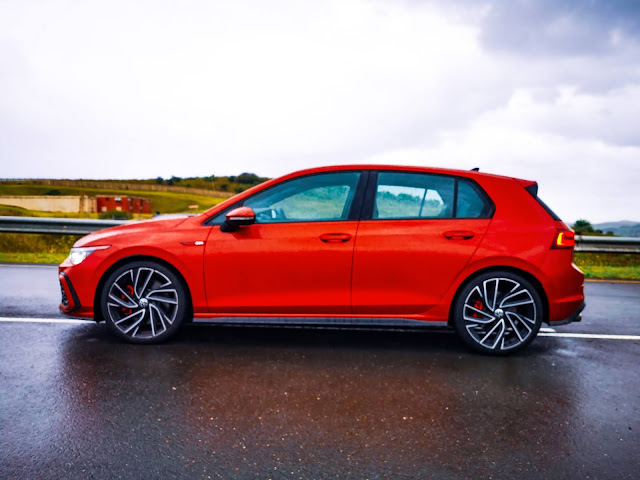 As mentioned the interior is super stylish and modern with a very minimal dash that features and innovision cockpit. Measuring 10-inches, the virtual cockpit displays in landscape classic content like the rev counter, speedometer and mileage counter which can also be switched up to display other useful information about the car with more detail and in cool graphics. The classic style was still my choice as it had a very cool animation with the rev counter having this red outering that glowed when putting your foot down. The new steering wheel also received some tech updates such as intuitive touch buttons, for example, the volume keys didn't need a firm press but rather sliding your finger in either direction made it louder or softer. This controls are finished in high-gloss black to give it a stylish look. The center infotainment touch screen features most of the cars controls with drop down menus that activate via proximity depth sensors that know when your hand is near them. This can be tricky to operate with especially when driving and using mobile apps which this car does come built-in with. The YouTube Music bar is located at the bottom so if I want to select that, the climate control menu comes up which can be frustrating. There are a few button located near the AC vents but those again call up menus on the large infotainment screen. Overall I felt it was a cumbersome process that they can improve on. Another gripe I had was the sunroof controls which also had that "intuitive touch" thing to it, opening and closing the sliding roof was fine but tilting up proved to be a challenge as you had to get your finger exactly in the middle, doing that when you are at a standstill is fine, but try doing that while you are driving! The new sport seats are absolutely amazing and damn comfortable, fully electric too! The tri-colour combination makes it look super stylish as well. This is continued to the rear passenger seats as well. Front passenger and driver enjoy dual climate control as well as twin-USB C ports and an optional wireless charging dock. I did mention that the car came with mobile apps preloaded but it also featured wireless connectivity for Android Auto which I was fully in love with! The ambient lighting in the cabin was stunning at night and really set the mood for night driving. One thing that was hard to ignore was the new styled gear selector, the switch type one which seems to be a common change in the Group as we've seen it in the Porsche 911, then the Audi A3 and now the Golf. It takes some getting used to but it gives the center console a much cleaner look. 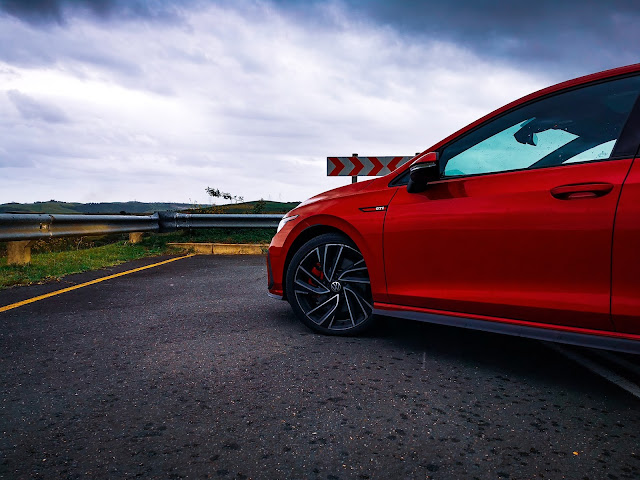 So the Golf 8 GTI, its more powerful but not faster or louder than the old one, is this a bad thing though? While many enjoyed the old one and rated its performance, why wont they just embrace this for having the same? Its clear Volkswagen were on a mission for this model, it wasn't all about making it fast and loud, it was about bringing the model up to date for what the youth of today look for in a car. It's futuristic and sleek, with enough tech to make any boffin get giddy. The car in-terms of his engineering works well and drives like a charm, not only is the ride extremely comfortable for a sports car, the steering and handling is superb, you can still feel the speed you're travelling at, its just not as throaty as you would expect it to be. Half the time that would be the annoyance to others so now you can rest in mind knowing that you can have fun without pissing off your neighborhood when you drive up and road the road. I still think this car will sell well locally, apart from it being the only model in the 8 range available locally, the diehard GTI fans will come to the party as well as those whom seemed on the edge but once they see what it has to offer other than the engine, it will convince many. Volkswagen SA also have managed an excellent base price for the car which many didn't expect and while that is the base price it is very competitive compared to what the others have on offer. 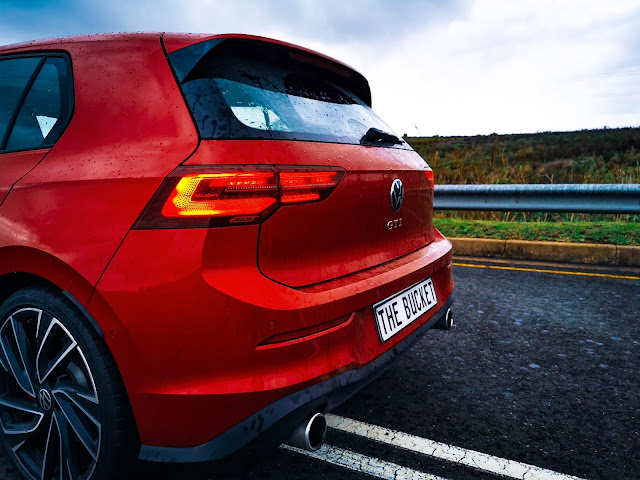