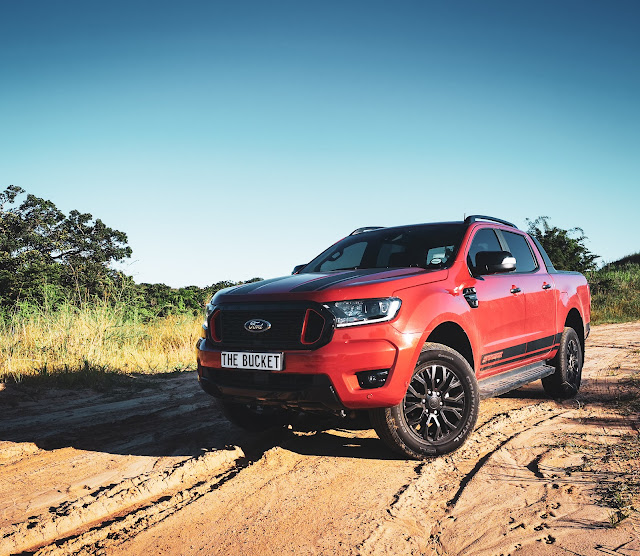 With Ford revealing to the world the next-gen Ranger and the Ranger Raptor, everyone is waiting impatiently for the local launch dates but while we still have some time before the next generation of one of the countries most loved bakkies, we still have some great models of the current range on offer. As per the norm with most out going models, brands tend to start releasing some special edition models to lure customers to take advantage of the model before the stops production for the new model. The Ranger Stormtrak has been released to do just that, while it was launched towards the end of last year, I recently got to spend some time with this rather impressive double cab bakkie and here's how it went.

DESIGN
The Stormtrak follows the lines of the range topping variants in the Ranger stable, such as the Wildtrak and Thunder with an aggressive look that is achieved with a blacked out front grille and door handles, posh side skirting, large black 18-inch rims and very sporty livery with the Stormtrak badge large and embossed on the front doors and tail gate. Other design elements include some coloured vents in the grille and black mud guard fitting on the front bumper. Finished off in a nice metallic Rapid Red colour the Stormtrak really did stand out from the rest and was quite the attention stealer. The car has a lot of presence so it demands attention, both on the road and when parked. Looking at the interior, not much has changed in terms of design but the finishes have been spruced up to give it a different look and feel to the normal Ranger line up. Red stitching  adorns the dash and steering wheel to give it that premium yet sporty guise, there's a good mixture of leather and suede in the cabin, again adding to the sporty nature of the car. Stormtrak insignia has been stitched into the front seats. Other noticeable additions include the Ranger name plate on the side skirts and Stormtrak name badge on the passenger side of the dash. 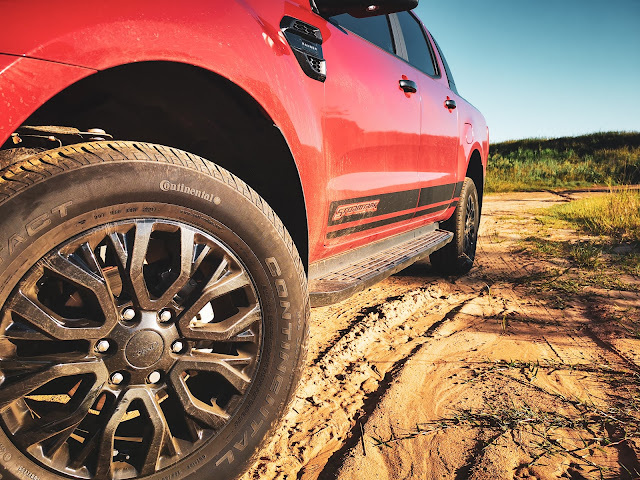 PERFORMANCE
The Ranger Stormtrak is powered by Ford's latest 2.0L BiTurbo motor from their engine line up, it's probably my favourite engine from their offering with it producing 157kW and 500Nm of torque from the smallest displacement motor in the line-up. This is assisted massively by the 10-speed Automatic gearbox which is a married made in heaven with this motor. It would have been fun to have paddle-shift as well but then again, I'm the same guy that said its an overkill in a competitors model which had it. The Ranger's ability on the road needs no re-introduction as it's sublime on tarred surfaces but it really comes alive on the dirt roads. I had the opportunity to do some exploring with the Ranger Stormtrak on the outskirts of Northern KZN, taking the roads less travelled through picturesque escarpments at some hairy heights. While my passengers were left aghast at some of the conditions, I was quite comfortable behind the wheel of the Ranger Stormtrak, knowing exactly what this vehicle is capable off and it handled every hurdle with ease. The Ranger off-road system is one of the easiest to operate and even a novice can figure it out. 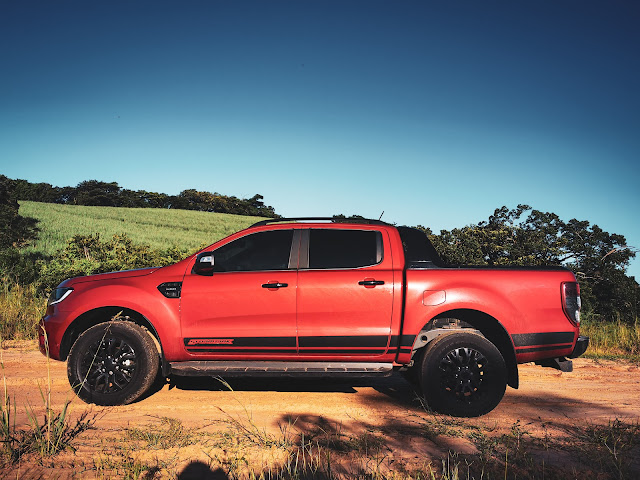 COMFORT
While this is a double cab bakkie, the cabin is quite spacious with enough room to seat four adults comfortably. The driver and front passenger get dual-zone climate control and seat heating, the rear passengers get single zone climate control which is controlled by the front passenger. The seats are very comfortable, with extra padding to ease out the bumps you'll experience when traveling off-road. The car comes with the lastest Ford SYNC 3 interface which has built-in mobile apps with 3x US ports for connectivity, Bluetooth, which is displayed on an 8-inch colour TFT screen. The car is equipped with a 6-speaker system that is pretty decent for a van.  Other handy standard features include active park assist for parallel parking as this vehicle is quite big. PDC sensors in the front and back plus a rear camera. LED Headlamps with daytime running lamps, side steps, roof rails and one which I really like is the automated tail-gate cover which is remote controlled. Sateywise, the Ranger Stormtrak comes with Adaptive Cruise Control, Pre-Collision Assit with pedestrian detection, Distance Alert, Autonomous emergency braking, Lane Keep Alert System and Auto High Beam Control. 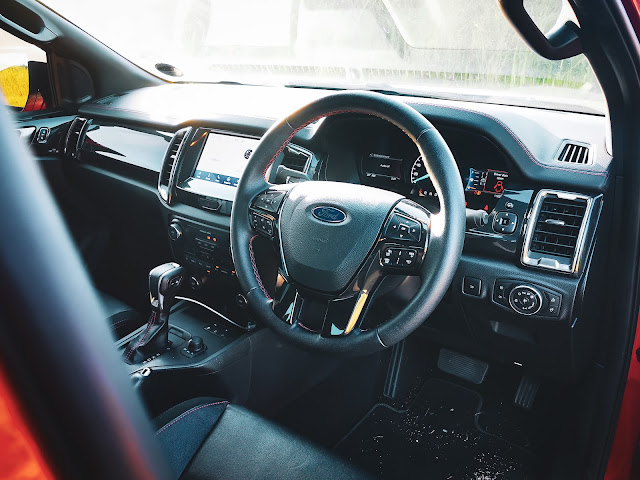 VERDICT
Overall, the Ranger Stormtrak really is the complete package when it comes to your luxury double cab offering. While the price may be an eyebrow raiser, seeing the list of equipment that comes standard might just give you some understanding behind it. Even with the next Gen Ranger due sometime this year, there will still be a market for this model, seeing that with increase in pricing for just about everything, this model might suit the pocket for many who can't justify spending their money on the newer model. It really is a well put-together bakkie and one can easily see why it's giving SA's number 1 selling bakkie, the Hilux such a hard time in the market since its introduction. The Stormtrak is a well rounded package which looks the part and in my opinion doesn't need any extra cosmetic modifications like what most owners are doing on the market. 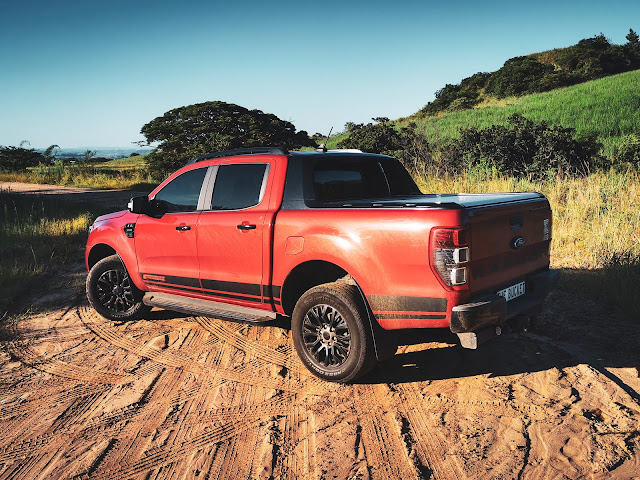 SPECIFICATIONS
Posted by Amith at 2:29 PM