It's holiday season and everyone is looking to escape the normal hustle and bustle of their daily lives to go away and chill for a few days.While on the break you want to be relaxed, have piece of mind and make sure everything is taken care of. There's many factors that one has to take in insuring their holiday is a good one and the major one is the accommodation. Ultimately it is going to be your home away from home, you want it to be a place you're comfortable at but at the same time be spoiled with some luxuries you don't have at home.

Upon my recent visit to Cape Town I was hosted by Tsogo Sun at their newly renovated Waterfront hotel.
The hotel has always been an icon to the city as it is one of the first buildings you see as you exit the N1 into town. It's conveniently located with the waterfront a stones throw away, the CBD just to the back of you and the CTICC practically neighbours it. The hotel is rated 4*,  boasts 14 stories and 546 rooms ranging from normal bedrooms to suites which have immaculate views of the harbour, city and mountain depending on which wing your room is situated in. It also houses a gymnasium, spa, pool, conference facilities, restaurants and a bar. There is two basement levels so if you bringing a car along, there is plenty space for safe, secure parking.

My flight was a late one and add to that, a minor delay with the meant I wasn't able to meet general manager Jeff Rosenberg on my arrival but even though I pitched up at an odd hour the staff were extremely helpful to ensure my check in was quick and easy. At the time I wasn't sure which room had been allocated to me but being on the 11th floor I was sure to have some good views. As I made my way to the bedroom, the porter told me how I would be surprised at the room I was getting, seeing that it was one of the newly renovated ones and boy he wasn't wrong.

For me being on holiday means I want to spoil myself with luxuries I don't normally indulge in and at the same time have the comforts of home so I don't feel out of place. The suite I stayed encapsulated this perfectly, in the entrance hall was the bar, it had an assortment of the finest spirits as well as a fully stocked bar fridge and of course there was also some nibbles to go along with it. Now obviously these all came with a price tag, one which normally could cause cardiac arrest but to my surprise most of it was actually reasonably priced! The room continued to surprise as one would normally help themselves to a cup of coffee once settled in the room but in my case I had a Nespresso coffee, yes my room had a Nespresso machine, complete with a selection of capsules...and its free! If you're old school or would rather prefer tea there was also a kettle available with your tea and coffee selection.

Moving on to the lounge, now my mum says I'm fussy but I think when you're used to something you will find it hard to adjust. What am I talking about? The TV! Every place we go to on holiday has the tiniest TV's imaginable and coming for my place with has a big ass plasma TV, you can relate to my frustration! Fair enough, you're on holiday, why would you want to watch TV? Well firstly, sport duh, secondly you want to keep track of things in the news, not to mention the weather, the room I was in had a 55" LED TV. The grin on my face was probably visible from Mars. The selection of DSTV channels was perfect and the hotel had a dedicated channel telling you about the hotel, the brand and what to do in the mother city.

There was a study table for me to work on, which faced the TV and I was also given 500mb of WiFi to use at my disposal which is always very handy given the price we pay for data in this country. Being in the digital era many of our devices we carry need to be frequently recharged and the room was full of plugs, at every convenient position there'd be a socket outlet for you to charge your cellphone/ camera/ laptop which some might find an overkill but I think its brilliant as one always has to hunt for a free plug point at other hotels or resorts.

The bed was massive, king size which was fit for...well a king! Nothing beats a good bed to get a good nights rest and I don't know if Tsogo Sun have a certain criteria when it comes to beds but this one was perfect! It made getting up from it in the mornings extremely hard! The room was fully air-conditioned with separate controllers for the bedroom and lounge. The bathroom was equipped with a shower and a bath tub, the shower had the option of a hand held shower or the head from the roof which gave a rain effect, it was also was packed with the necessities for ones stay.

Now as much as the room has a major role to play in a hotel, the service has to live up to expectation to. That's what really won me over at the Waterfront Hotel, at all times there were security on patrol so there was no reason to be unsafe in your surroundings. The people at the front desk are forever smiling and ready to help you with what ever you need. There also comes that human element which some places lack, for example every morning at breakfast Avela, one of the waitresses knew I'd  have my morning cappuccino, the chefs manning the stove knew what filling I wanted in my omelette and even offered me to try various combinations that I might like.

The range of food offered in the breakfast buffet blew me away from fresh fruits, to cereals and yoghurt's, the hot food stand was sure to leave your mouth watering and just when you think you had enough, the pastry table had you coming back for more! They even have an oven which bakes croissants in front of you! You cannot say no to that! Sticking on the topic of food, the hotel offerers a wide variety of in  room meals, some of which are available 24 hours, which comes handy if you're like me partying till the early hours of the morning. Getting a gourmet burger with chips delivered to your door in under 20 minutes at 3am, that is service!

I only met with the hotel GM Jeff on the day I checked out which was probably a good thing since no one knew who I was and there wasn't biased treatment offered to me. As fate would have it I bumped into a friend who also checked into the hotel for the week as he was down in Cape Town for a conference, he normally stays at another establishment but due to his family tagging along he booked in here. He to was blown away by the hotel and even said that he might consider the Waterfront hotel in his future trips to the mother city. Overall my stay at the Tsogo Sun Waterfront Hotel was amazing, it was unparalleled to anything I have experienced in South Africa. The main thing is getting that combination of both comfort and  luxury but must have the service to match, for me this place had it all. I definitely will be paying Jeff and his team a visit again on my next trip to the Mother City. 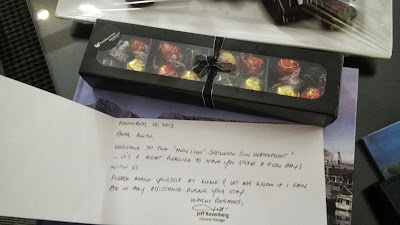 Just want to say a big thank you to Jeff and the staff at the Waterfront hotel for making my stay an enjoyable one!
Posted by Amith at 11:07 PM