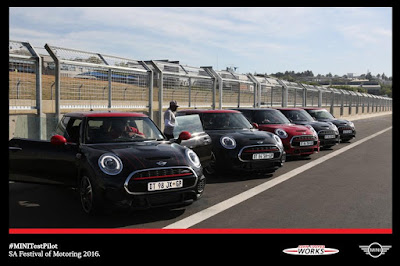 So as most of you know, that's if you follow me on Twitter, Instagram or Snapchat, last week I was invited to the SA Festival of Motoring held at the refurbished Kyalami Circuit by Mini South Africa. For those of you who didn't catch the action, fear not as I captured as much as I could and will recap most of the action here on the blog. It was an early start to the day last Friday but it was entirely worth it, we arrived and the brand spanking new Kyalami Grandprix Circuit for the start of proceedings. It was my first time visiting the track after it underwent a major overhaul, I've got to say Toby Venter has done a magnificent job with the track and here's hoping it hosts some major races in the motor sport calendar in the coming future.

Back to the schedule of the day, after arriving at the Mini stand at the SA Festival of Motoring and registering for the day ahead, Edward Makwana of BMW gave us a brief run down on Mini's John Cooper Works model as well as the history behind the legendary racing name. Mini has a proud racing heritage, stemming from the Rally days with John Cooper and now with the latest generation Mini's see's them make their way onto the track, and to tell us more about that we were introduced to current Mini Challenge Champion Charlie Butler Henderson of the UK, name sounds sort of familiar? That's because his sister might be recognised on 5th Gear. Charlie was down with his Mini Challenge Race car to show exactly how fast you can get a Mini to go!

First up though was us trying our hand at taking the production version JCW out on track. I know it won't relate to everyone but almost every young boys dream is to one day be a race car driver and for me it was my first time racing on a proper race track. Having done my BMW Dynamic Driving course, I had suitable knowledge on how to handle the car but by no means would I consider myself a pro. Luckily for us we had instructors in the car giving us tips about the track and car. We were allowed one lap around the new circuit and it was extremely thrilling, having the chance to push the Mini JCW to its peak potential was exhilarating to the say the least. Also most of the driving aides were turned off to allow maximum track feel.

I thought I did a pretty decent job of the lap, well that was until I jumped into the passenger seat and the instructor showed me how it was done. It was then I realised I got some practicing to do if I want to resurrect my dream of becoming a race driver. After that kick back into reality, it was time to for me to strap into the Mini Challenge, Charlie wanted to show me how to really drive around the track! Word's cannot describe the feeling, firstly being strapped into a race car and secondly being thrown around the track at high speeds, it was all good fun and better than any roller coaster ride you can think of! Charlie is a pro and have experienced going around a track with him is something you will remember forever. After completing all the activities, we were awarded honorary Mini Test Pilot statuses, not a bad accolade to have if you ask me. 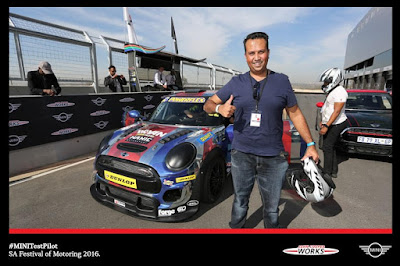 That was it for the day but I went to visit the boys down at BMW in their pit garage to see what all the fuss was about. Apart from all their M cars, the Germans brought down their mighty M6 GT3 along with it's driver Jens Klingmann, that car is nothing short of awesome and epitomizes everything BMW M Power stands for. It was by far the loudest and fastest car present their that weekend. Other goodies hidden in the BMW garage was the recently launched M4 GTS, of which only 23 will be sold locally. The BMW 30th Anniversary M3 Jarhe and flown in from Germany, the BMW M760Li. A true luxury limousine with a monster V12 engine in the front.


Overall it was an amazing experience and I would like to thank BMW and Mini for making this happen as it was Bucket list stuff that was being ticked off that day. Cannot wait to see what next year's festival has in store!

Some highlights for the Festival


Riding shotgun in the BMW M3