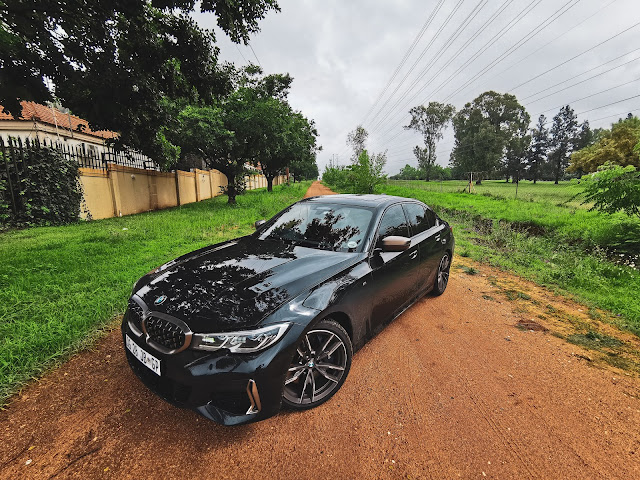 xDrive, it's the term that stringing the cords of many BMW enthusiasts of late, most in a good way but for some in a very bad way. You see BMW prided themselves on being a sporty, rear wheel drive specialist manufacturer but of recent things decided to change. The 2 Series Active tourer saw BMW for the first time make a car with front wheel drive, shock, horror, but truth be told it wasn't all that bad, apart from the looks. Then BMW introduced it's four wheel drive system. dubbed xDrive in its SUV range and later to the flagship 7 Series model. This was in response to Mercedes-Benz 4Matic range as well as the Audi's Quattro system. The tech was later introduced to the new M5, which was where some of the fanboys got a bit uptight preferring the rear wheel, lets go side ways drive trains which in all fairness is fun but BMW needed to close the gap on its rivals hence the M5 comes with rear wheel steering as well, so you can still go sideways with all four wheels driven. Now BMW have introduced its flagship 3 Series model to the market, the M340i and guess what? Yes it has xDrive, I had the opportunity to spend a few days with what currently is the most powerful 3 Series on offer (until the new M3 comes out) and this is what I thought of the car. 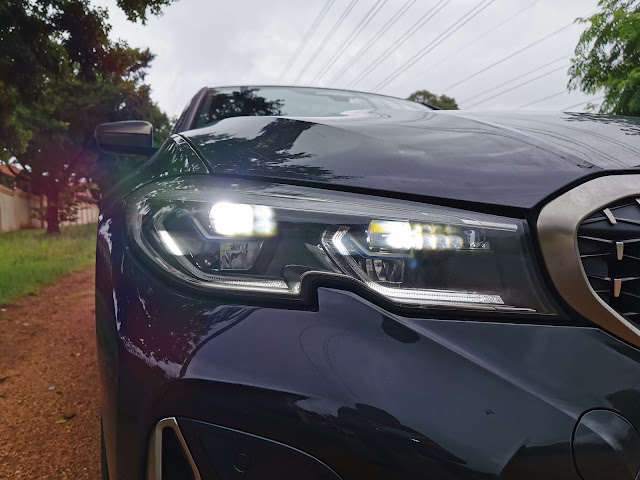 In the F30 range, it was difficult to determine the 335i or later on the 340i from the rest, apart from the dual exhausts at the back, it looked pretty much the same as your 320i, it's a good thing that designers for the G20 didn't take this lackluster approach with the new 340i because my God it looks brilliant. While the additions might be minor they do make a dramatic difference to the overall look of the car. It is a proper M model so it boasts the M Sport kit, with the additions of brushed aluminium accents on the front diffuser as well as the edging around the grille. The grille also sports a new design with almost a trident looking emblem on it. The mirrors also come in the brushed aluminium finish which you can chose various colours of, the car I had almost had a gold finish to it, very attractive with the black. Moving to the back, which not having any of that brushed aluminium, the does boast two monstrous looking exhaust pipes on either side as well as air vents on the on the back bumper. The M340i comes standard with 18" times with the option for 19" which came kitted out on this car, it certainly helped with the looks along with exposing the blue coloured brake calipers. Overall, a big thumbs up on the looks department from me. 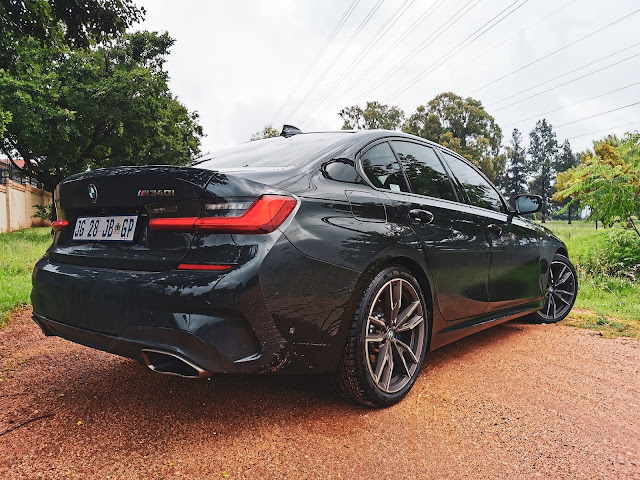 BMW say that the M340i xDrive aspiration is for maximum performance in perfection, that give you breathtaking driving dynamics that release adrenaline at every moment. Slapping the M badge on the name tag means it has to live up to the true meaning of BMW Motorsport and with this new engine, I have to say it does. While many will feel this isn't a true M car, it will have even the skeptics doubting their words once behind the wheel. The refined  3 litre, 6 cylinder M TwinPower Turbo engine produces 285kW with 500Nm of torque, all that power is guided through a perfectly tuned 8-speed M Sport transmission which just delivers thrusts of power, gear change after gear change. It's addictive and the sound just adds to the dramatics, which goes to prove that those large pipes aren't there just for fun. The car setup is near perfection and the xDrive system works like a charm. Testing the car in Johannesburg meant me having to deal with a lot of traffic but what made matters worse was the torrential downpours which lasted my entire stay. At first I was annoyed because it never really gave me the chance to go full tilt with this beast but that xDrive badge just gave me a gentle reminder that I could have fun with it in the wet. The handling of the car with the four-wheel drive is rather special and while BMW might be new to the tech in their sedans, they do seem to know what they're doing which is a good thing. It's an intelligent system as well, it knows how much power to deliver to which wheel and when. 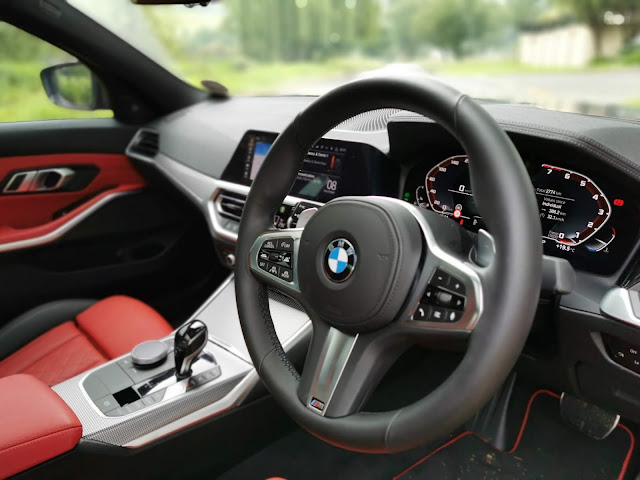 While the M340i is practically a normal 3 Series with a bit more oomph, that oomph is also translated into the interior with a much more sportier looking accents than the normal. Lots of brushed aluminum, stronger blacks, and shiny metals. The spec which I had just scram flamboyant with the perfect contrast from the dark exterior with a bright red and black interior. Diamond stitched seats added some luxury aspect to it but other than that BMW really did a great job with the trims and materials offered for this model to make it look the part. Most of it is generally the same as your normal 3 but there are things  that remind you that you're in something special, like the M340i sign that displays prominently on the instrument cluster. Tech wise, it has all the same bells and whistles offered in the line up, my personal favourite being the laser lights and now the reverse assist. 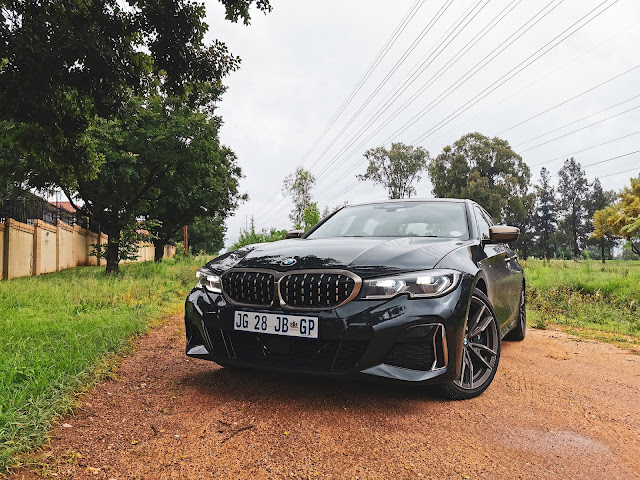 Apart from the xDrive, the next big talking point about the M340i is the price tag, which starts from just a few hundred thousands under a million, when spec'd up it can reach well over a million. Yes, a million rand for a BMW 3 Series which isn't an M3. It's unheard of, people will think you're crazy to even consider this but my thing is, the pricing of the new cars in SA has sky rocketed to this level where you can pay up to 900K for a well spec'd 330i so when you think of it, getting the M340i for a million isn't that big of an adjustment but it's just the mindset that can comprehend that a 3 Series is breaking that million rand barrier. Yes there are other options which are cheaper but I'll be frank with you, and if you're a true BMW enthusiast you will agree, there's something about a performance BMW that tugs chords in you which evoke emotion that no other car can bring to you. While others will offer you more speed, send you sideways around bends, this just does everything right and will have you flicking up and down the gears, giving you every ounce it can when needed. My time was too short with this car and I hope I get to sample it again in the new year, to see what it can do down at the coast. 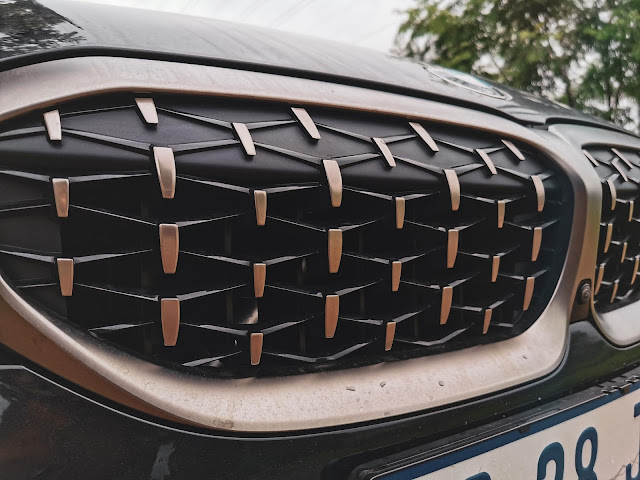