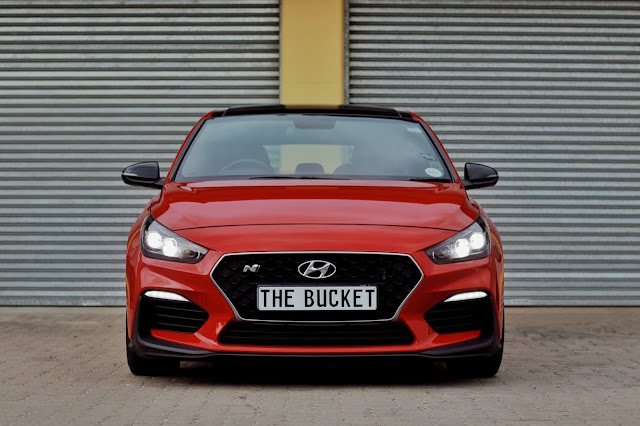 This review was meant to go out on Christmas Day last week but with everyone, eating, drinking and being merry, including myself I decided to postpone it and let it be my final review of the year. It would have been fitting for Christmas seeing that the car was red but oh well, you getting to read about the car now so be quiet. There is many adjectives I can use to describe the Hyundai i30N, controversial being the first one, simply because of the public uproar over the pricing. I get many were upset over the price which is just under 700K but this is the Korean manufacturers first performance model, one that was not going to make our shores at all but after much outcry they heeded the call and brought in a few units. The ones whom are making the most noise are most likely never going to buy or experience this car, so they can go on venting their frustration on the internet about it but after spending a week with it, bly me Hyundai, all I can say is what took you so long! 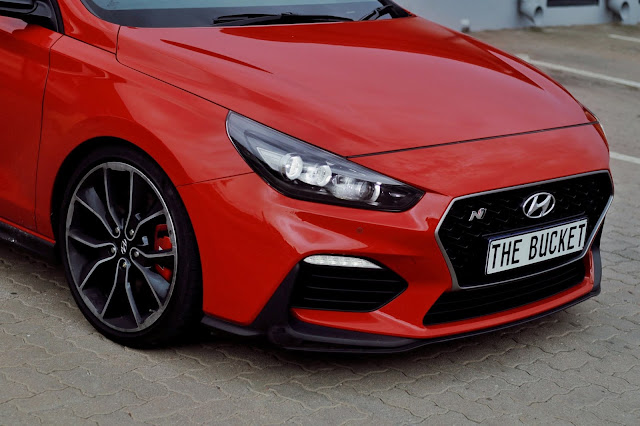 The i30N is a brand new design, looks nothing like the current i30N model on the market and probably a good thing to because it gets people to notice you. After-all it is a car that cost almost R700,000, you want to stick out a bit. As mentioned the car was red in colour with black accents around the car which included the roof, which three-quarters of it was the massive panoramic glass sunroof. The wheels, massive 19" multi-spoke, bi-colour rims with clear view of the huge brake discs and red calipers. The front end is very sporty with the pointed front and the trapezoid grille and X style venting, having the Hyundai badge center with the N to the side. The number plate slots right in the middle just below the front difuser. The LED day-time running fogs give the car that extra highlight when looking at it from the front. From the side, it looks like your average hatchback but the back continues the sporty theme with a large rear difusser which houses the raucous twin tailpipes. The rear lights are LED with a pattern that follows the outline. The rear wing almost looks like an extension of the roof and has a single join at the center which house a triangle break light. All very sporty and enhances the cars aggressive look. On the inside, the car is set up to be a drivers car with the cockpit being very driver centric, the front seats are racing seats and if look carefully in the trunk, you will notice bit of the roll cage being exposed. 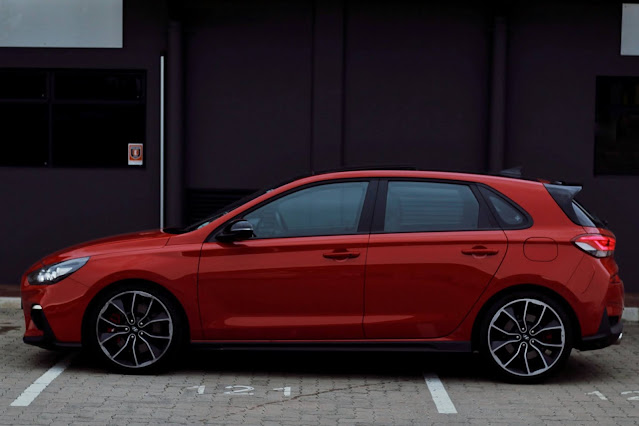 So, all that money for a Hyundai, what am I getting? Well apart from the 2.0-litre turbo-charged petrol engine which delivers 202kW and 353Nm of torque, with a 6-speed manual gearbox, electronically limited  top speed of 250kph, you're probably getting one of the best driver intuitive hot hatch on the market. This car evokes emotions that you want from a car, while there are various driving modes such as ECO and Normal, you're only going to want to drive it in sport but once you get to know the car you can even go and customize your driving profile, deciding from power, exhaust volume, power delivery and even steering. The car lets you command what you want from it, and when you want it. The front wheels are fitted with an electronically limited slip differential, traction control and stability control (ESC) these can be switched off at your own digression. The cars infotainment has an application called N Mode which is perfect for tracking performance, gives you live telemetry and also allows you to go back to the last 30 minutes of driving so you can check where the optimum performance levels were and where you were slacking. It also has a timer for 0-100km which was rather fun to use as well, the best I managed was 6.10 seconds which is not that far off from the 6.2 seconds claimed time. The clutch on the i30N is pretty heavy and took some getting used to but you appreciate why they've done that after driving it around, with the short gear changes, its good to have it and also provides such great feedback that you just want to keep on going. Also when you push the clutch in, the exhaust lets out a few pops and bangs to get the people around you aware that you're there. The car manages brilliantly on corners as it does on the straight stretch, the amount of control you have with the rigid body and big tyres, the car almost mocks you to say attack that corner more, give it more power as you navigate the twist's, the gearbox is also lenient with you, allowing you to drive at the lower or higher gear, giving you a boost to sort when you exit the corners, also for those moments when you have lapse in judgement and end up switching the car off, just push the clutch back in and the car starts itself up. 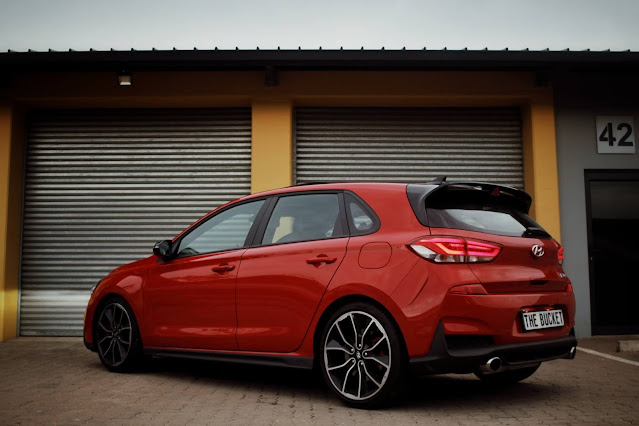 Look, its a performance hatch back, so you're not going to get Rolls Royce luxury, and I even said it has a roll cage, well half of one for added support so that alone tells you that this isnt going to be the most comfortable ride. In Eco and Normal mode, the suspension does its best to keep it calm on the ride but I was all about that Sport mode life, suffice to say it was rather bumper but the seats are good at keeping you in your place, pretty snug and comfortable and it even has a heating function! The layout of the cabin is very spacious, the seats are also electronically controlled with memory seats, the car has dual climate control as well to regulate temperature in the cabin, the car has a huge infotainment touch-screen with bluetooth connectivity, there was no sign of Apple Car Play or Android auto but to honest I didn't really care. There was a wireless charging mat for your smartphone so probably there is an add on app or software update that could give you smartphone app connectivity in the future. The steering which and instrument cluster is blody brilliant, with a multifunction wheel, the only buttons I was interested in was driving mode and the custom race button which gets you into sports mode with one push of the button. Easy enough to get you from driving miss daisy to racing Vin Diesel. The car has adaptive headlights which navigate through bends and switches on the brights in dark roads, there is also rain sensitive wipers and my favourite feature was the rally style LED lights on the dash which light up when red-lining. 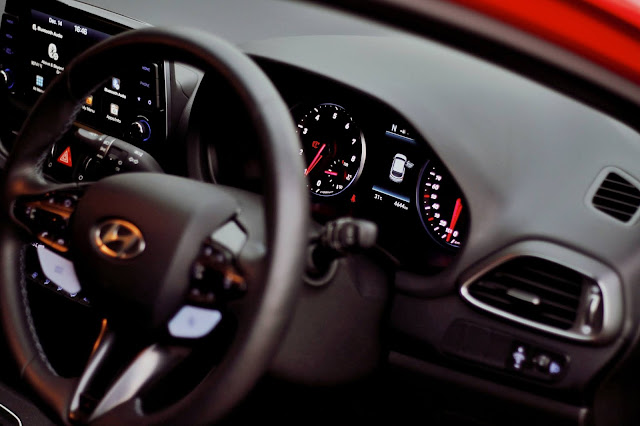 The i30N is a beast in its own right and deserves to be lauded and spoken in the same breath as the Golf GTI, Renault Megane RS and Honda Civic Type R. While many still won't be keen on it, its a breath of fresh air to the hot-hatch segment offering its own unique take on what a hot-hatch should be. It's a brilliant first attempt from Hyundai and with a confirmed i20N due next year, one can only anticipate how good that will be. Yes, R679,000 is a lot but when you're comparing apples, this car offers a lot more than its competition and also the overall feel you get when driving it is incomparable to some of the others. Hyundai, you've blown me away with this one, I really didn't want to hand back the keys, it was blimming good fun and I'm jealous of the owners of this model, one of which I passed in Umhlanga while driving around, judging by the massive smile on her face, I could tell she is very happy with the purchase. Also the i30N comes with Hyundai's standard 5 year/150 000km manufacturers warranty which can be extended by 2 more years. 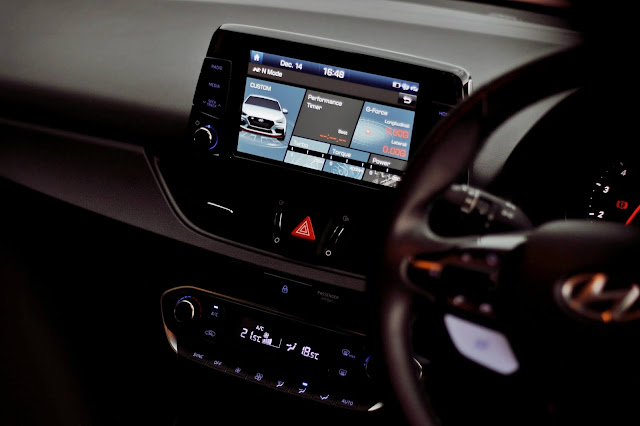