Last week Friday, I along with Marc Forrest and Kyle Fraser were invited to lunch at the Oyster Box with Glenmorangie Whisky. Some might not have heard of the brand before and I must admit it wasn't until this years Durban July did I discover this single malt Scotch whisky. The tent I was at had stocked up by Jack Daniels and once the stocks of the US bourbon were depleted, I had no option but to try the original Glenmorangie. I was pleasantly surprised by it, being a whisky drinker myself I found the tastes quite different. Yes I mostly drink mix blends but what was evident in this was its fruity nature, something that I haven't picked up in a whisky before.

Karen Fullerton who is the Global brand ambassador for Glenmorangie was in Durban for FNB's Whisky Live exhibition at the Durban ICC, so it was a unique opportunity for us to meet her along with Patrick John Leslie from the Moet - Hennessy group of South Africa, seeing that I didn't get the opportunity to visit the event this year. Learning first hand from Karen about the Glenmorangie was quite an experience, she is so passionate about the brand and their product, it just leaves one fascinated about it.

Here are some facts about what makes Glenmorangie unique to other whisky's:
We started off the lunch with a shot of the original, Karen took us through the various aroma's and tastes before suggesting a starter to pair it with. Oysters were the winner, the saltiness of the oysters brought out other tastes to the whisky that we didn't pick up on when sipping it before.

Before we ordered our mains, Karen brought out some samples of the whiskys taken from the still. One was from the first fill which is right at the top and the 2nd was from the 2nd fill. The contrasts in both the samples was quite evident and surprising seeing that they were taken from the same still, where by not only did the colour vary but also textures and tastes.

For lunch we were treated to something very special, Karen brought along a bottle of Glenmorangie's signature whiskys, the Signet.  A lot about this whisky is kept a close secret but what they can tell us is that it is a fusion of unique and rare elements and is the richest whisky in their range. The whisky is aged in a made to order cask and made with a chocolate malt barely. The thing that gets your first is the aroma's, there is a rich coffee smell almost that of an espresso and elements of citrus to it. When you take a sip, you notice the rich texture as its almost sherry like then the explosion of tastes take over. From the chocolate, to the orange, hint of peaches and also coconut. It almost sounds like a dessert and too good to have with a meal but as I found out while having prawns as my main, paring it with certain foods accentuates other elements of the whisky.

Seeing that the whisky did have that sweetness to it, Karen suggested that we order something chocolaty for our dessert to enhance the chocolate malt barely. Never have I had whisky  with dessert so this was a new experience for me! Just like the main, the dessert allowed other elements of the whisky to stand out, one could get more of the chocolate taste and it felt almost espresso like. Needless to say I finished glass and my plate with ease.

Although it was just a few hours, the amount I learned during lunch from Karen about the Glenmorangie Whisky family it feels like I've known about it forever. Their whiskys are really a side step from the norm and I recommend any whisky lover to taste them, the Signet might be out of the price range for some, seeing that it retails for about R2000 a bottle but the original does provide ones palate with a journey of taste. I am extremely grateful for the opportunity as the helped educate me on single malt whisky so I hope this isn't the first and last time I heard from the brand! 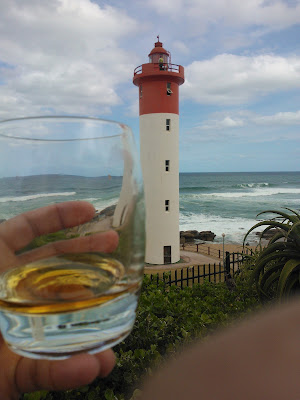