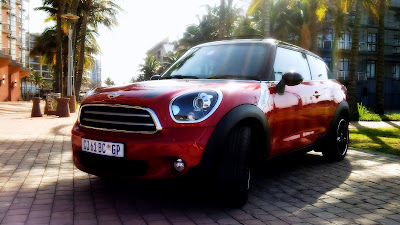 When it comes to Mini, everything they do now is a contradictory of its name as it is all big and bold. I’ve been spinning around for the past week with their latest variation called the Paceman. It’s a cross between a SUV and Sports Coupe …if I may describe it as that, something like Land Rovers Evoque. It’s based on the Countryman but instead of four doors it has two really big doors and a very sexy sleek slanted roof line which they call the 'helmet roof' that’s very easy on the eye, it also gives it that sporty stretched coupe look. 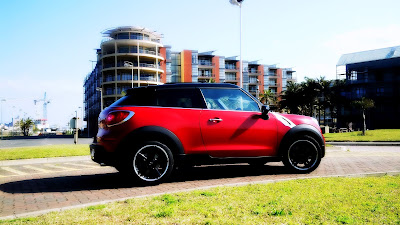 Another interesting fact about it's design is that it’s the first Mini to have horizontal rear lights, doing away with the cliché vertical ones found on all their other models. The car is offered in 3 models, the Cooper (90kW), Cooper S (135kW), JCW (160kW) all which come standard with a 6 speed manual gearbox or a 6 speed auto gearbox is available as an extra. 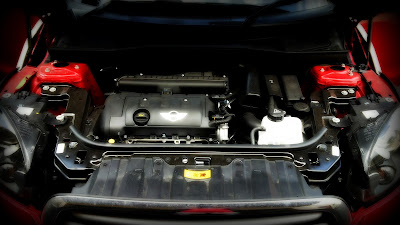 I’ve been given the standard Cooper but then again when it comes to Mini there is so many ways to customize it that no single one is really “standard”.  My particular one had 18” mag wheels, some sport stripes and a panoramic sunroof as extras. The car also comes in two tone colours so you can let your imagination go wild but for me the red and black combination which mine had looked quite wicked. 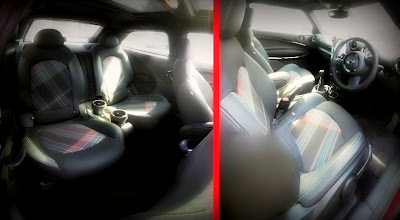 The cabin has a 2 x 2 seat configuration with individual seats for each of the 4 passengers. There is ample room in the front for both the driver and the passenger whilst at the back, the space is pretty decent for an adult but they just have to mind their head when getting up with the slanted roof. The car has all the equipment you’d expect to find, including hands free Bluetooth which again was very simple and quick to set up, its a pity that it only offered calls feature and not the media streaming but there was a USB and AUX port for that. 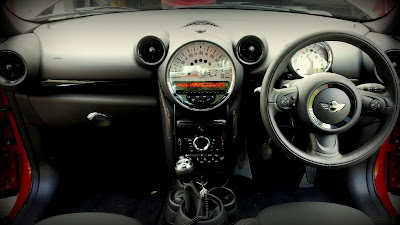 Like the Countryman, the cruise control and media controls can be found on the steering wheel. Everything is neat and has that quality finish that one becomes accustomed to by the brand, the traditional large speedometer is prominent in the centre with the other instruments are located below it. The car also has the mood lighting where by you can change the colours of the inside cabin lighting with a flick of a switch. The panoramic sunroof did get used a lot during these lovely sunny winters days in Durban. 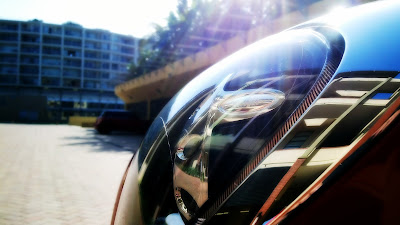 Ride quality of the Paceman is faultless, it really is a joy to drive and with the active power steering it makes navigating the car really easy. Although if you want even more stability, there is an All4 option for it. Having the 90kW engine did have it's flaws though, even at the coast it seems to lack the power needed and I found myself having down change gears at every incline I faced. The car is heavy, coming it at 1.7 tons, so maybe there is a need to opt for the Cooper S or JCW if you are considering this vehicle but if you're not phased with power then the Cooper should be fine as as on the flat surface it just eats the tar in front of it as the naturally aspirated engine takes the car from 0-100km in 10.4 second which is decent for its size and weight. 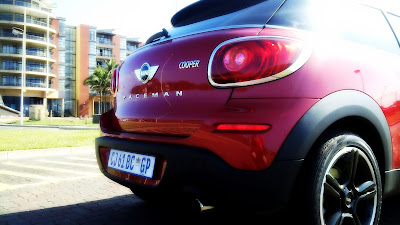 Lack of power wasn't my only issue with the car, the car has a raised window level which like the roof goes off at a gradient which increases as it approaches the rear, this obstructs part of the view of the side mirrors which prove to be a nuisance when parking. Yes it looks cool but practically it doesn't make sense. Then there's the turning circle, the Paceman isn't a very long car, so you'd expect to do u-turns pretty easily with it but it doesn't. For what would be an easy u-turn for many cars, it would take a 3 point turn for the Paceman. Lastly, the long doors, no seriously they are huge so one has to be extra careful when parking next to an object or other cars if you don't want to transfer some of your paint to them. 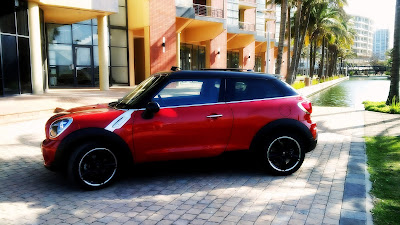 The boot space is decent with 330 litres of it at your disposal so you can get your golf set in comfortably and if need be you can drop the back seats for additional room. The doors have compartments to keep stuff like keys and sunglasses but if you're like me you can just dump stuff in the cup holders. 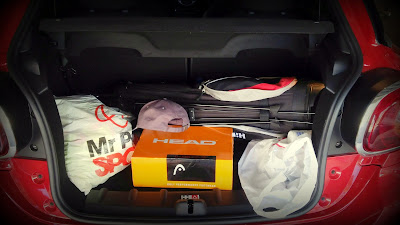 One thing that becomes fairly obvious when driving this car is the attention it gets, the car is a head turner of note and people will notice you driving down the street or when at halt at an intersection. The exhaust has a lovely tone to it so it sounds like its packing some power even if you're sitting with the 90kW Cooper engine. Its spacious and handles like a dream and is not too shabby on fuel consumption with a claimed 6.5l /100km. The car can be regarded as a novelty but at the end of the day, it's not impractical to have and with baring the quality that BMW pride themselves on, you know you're getting a good product. 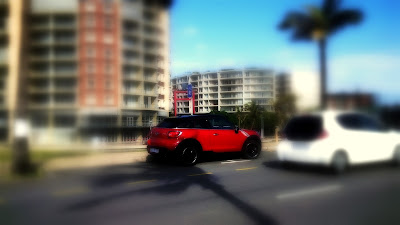 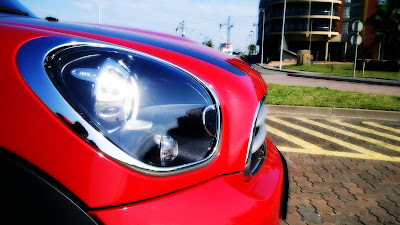 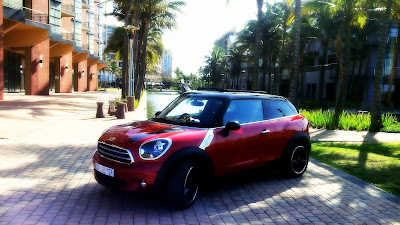 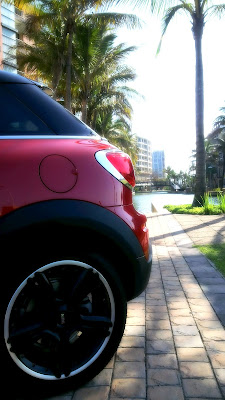 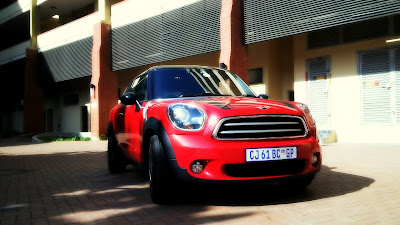 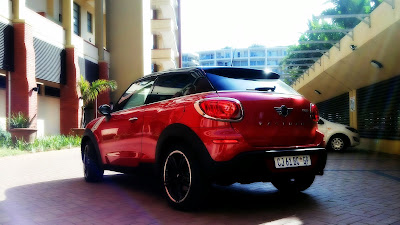 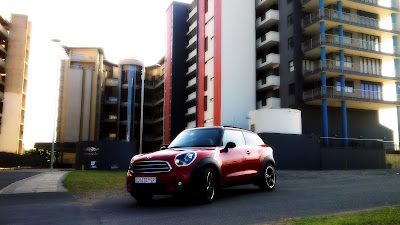 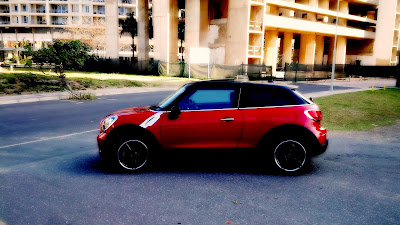 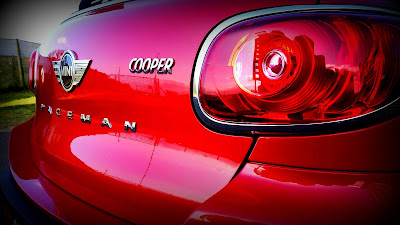 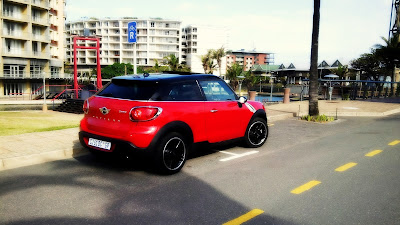 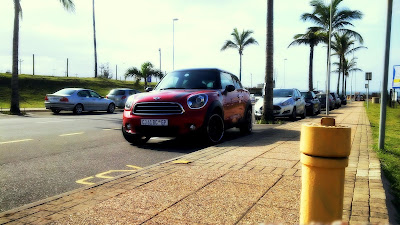 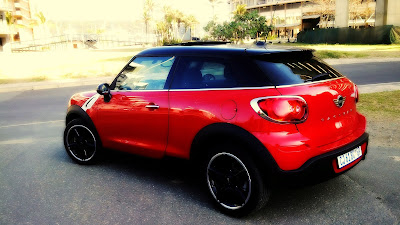