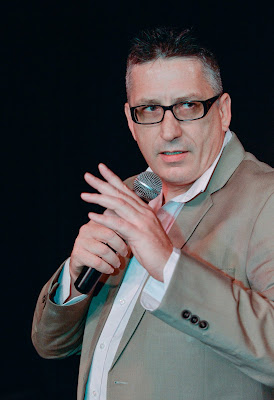 Tonight see's one of Durban's most loved radio personalities hit the stage as part of his Never Ending Comedy Tour. Darren Maule is no stranger to South African comedy, having first met him 4 years ago on a different comedy tour at Sibaya Casino, at the time he was still residing in Joburg but it was clearly evident that Darren loved Durban and not long after that he moved to Durban to start a career on the local Radio station ECR hosting the East Coast Breakfast show.

The Never Ending Comedy Tour with Darren Maule features  him as the MC together with a different line-up each month of 3 to 4 local and national comedians on stage for one night only in different venues around KZN. After performing at the Wild Coast not long ago, tonight sees the show return to the Durban Country club and features Magic Man, Martin Jonas, Rory Petzer and Logie Naidoo.

"The idea is to take quality comedy to different venues all over KZN to people who want a good night out at a good price. Not everybody can, or wants to, travel far to see a show, but everybody does want a laugh and comedians love what they do - so we've put the two together!" say Maule

KZN in general is lagging behind in the comedy scene with it seeing some ups but many downs over the years and this is the perfect platform to kick start the local comedy scene. We've generated some top talent in stand up, the likes of John Vlismis, Simmi Areff, Angel Campey and Robbie Williams to name a few, so with this Tour it will give opportunities to local comedians to shine and Maule's business manager Claire Clark had this to add "Another exciting part of this initiative is that on 'open mic' spot per venue will give an aspiring local comic the chance to perform on stage as part of the line up"

Tonight's show takes place at the Waterman Bar at the Durban Country Club on Isaiah Ntshangase Road, Durban. Tickets are R100 and are available on Computicket, show starts at 8pm so don't be late!