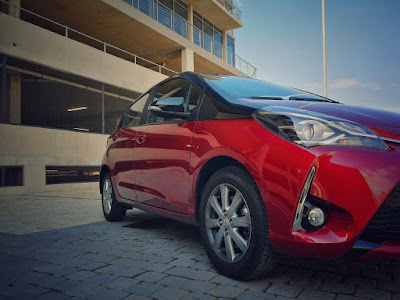 With the ever fluctuating price of petrol, and the increasing price of cars now, many are opting for smaller and more fuel efficient vehicles. In South Africa, the B-Segment category is one of the popular ones, with small hatches being top of the list. A firm favourite with the majority is the VW Polo but with it's popularity over the years, comes a price as it is, according to insurance companies an extremely high risk car. Fortunately for the consumer, there are many other models to chose from the B-Segment range, and the next model that ticks all the boxes is made by one of the most reliable names in motoring, Toyota. The Japanese outfit first introduced the Yaris to our markets in the early 2000's, ever since then it became one of their popular smaller models. While it didn't have all the bells and whistles, it had everything a little run around would need at the time. Aircon, Power Steering, USB and ABS, moving onto today, the Yaris has evolved into a city car of the future, as I discovered recently while driving around in the new Yaris Pulse. 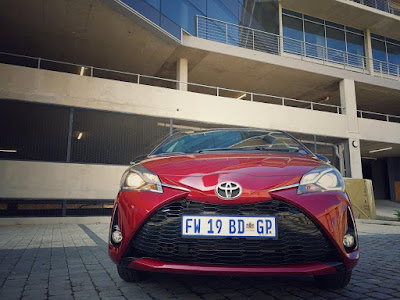 The design of the Yaris has taken a great turn for the better, it's new ultra sleek, modern Japanese look really suits the car, it almost looks like something out of a Manga cartoon. It has adopted the X style front end and spindle type grille from it's smaller brother the Aygo and knits into the new front head lights perfectly. The head lights and rear lights have been elongated from the previous model with edgy lines, adding to the Yaris sharp looks. The model came with two tone paint, with a dark maroon at the bottom and black on the roof and side pillars which really accentuated the car's design and appeal. The car comes with a multi-spoke 15" alloy wheels, which add's to the cars sporty appeal. Moving onto the inside, the layout is clean and neat. I particularly liked the instrument cluster, it's well laid out and easy to use. The large touch screen infotainment system is also pretty user friendly that has everything you need at a touch of a button. 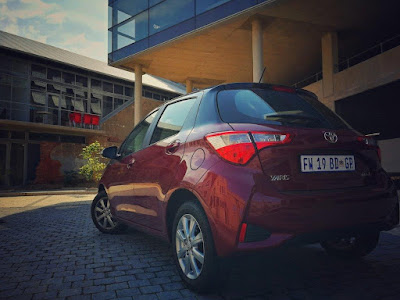 The engine in the isn't the most powerful one around but has sufficient power for the Yaris. It's a 1.5 litre, inline 4 cylinder motor which producers 82kW of power with 136Nm of torque. The model I had came with a seven speed CVT gearbox, yes you read right, the Yaris CVT has 7 gears and paddle shift. This did surprise me when I first saw it but it proved to be quite useful, not to mention quite fun to use you on windy roads. A warning though, making use of this function in sport mode (yes it has sport mode too) does tend to make the car a bit thirsty but overall the car is very fuel efficient. 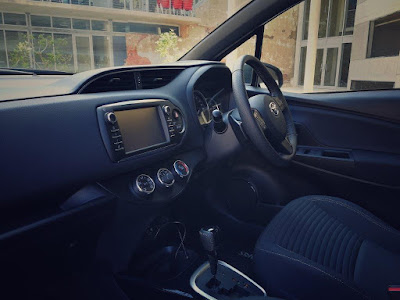 The Yaris is a small car and you not going to fit a circus in there but it is ergonomically designed for maximum comfort. Front passengers have tons of space for themselves, the rear passengers also have a decent amount of leg room given if the people in front reach some sort of compromise. The boot space has improved from the first gen model as well, you can get a decent amount of luggage in there. The car doesn't comes with climate control, which is a pity, I would have hoped that this one being a top of the line model would have it. The ride quality is good enough for a car like this, meaning you do feel the road if it's a bit bumpy but generally gives a good ride around most roads. The cruise control is pretty stock standard as well, does the job and with the 7 gear transmission really increases it's economy. 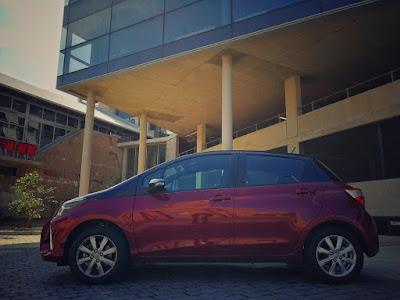 Overall the new Yaris Pulse is a great city car, be it for going to and from work or for a kid going to college. It's small, has a great turning circle, has most of the tech that the younger crowd would want in a car. The engine is nippy and it is light on fuel. The looks are a bonus if you ask me, as there are many cars in the market which fit into this segment but don't really look that appealing. The car is well priced too, quality and finishes wise, the Polo does pip it in that department but Toyota's reliability and great resale value come into play. 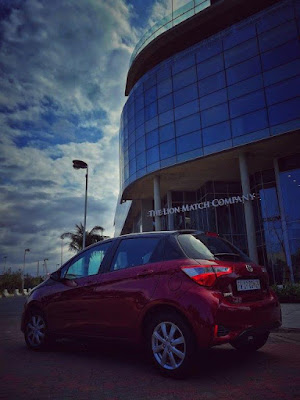