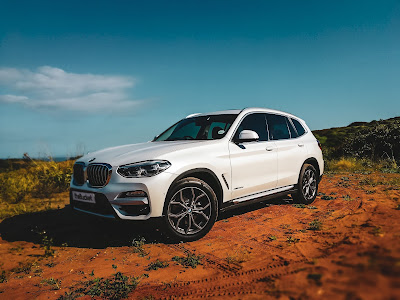 Last year I attended the launch of the 3rd generation BMW X3 down in George, it was a very important launch for BMW SA as it would be the vehicle that ushers in a new dawn for their Rosslyn plant. After producing 5 Generations of BMW 3 Series over the years with a total of 1,191,604 being assembled for both the local and export market, the plant has now been reconfigured to build the all new X3. While on the launch I got to sample the range topping M40i petrol engine, but on test I had the 2-litre diesel variant which some might seem as a downer but again, this motor would be the popular one that sells the most and again a very important one for BMW, and you'll soon find out that it wasn't all the bad to drive around in. 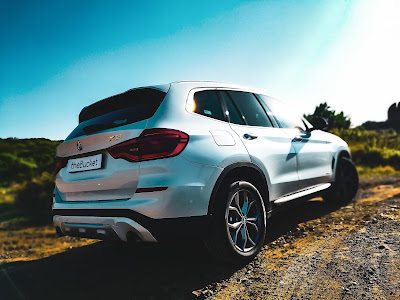 I've been quite vocal about this design, the first two generations of the X3 didn't do it for me, the first one was another nightmare from the Bangle era, while the second one sort of made amends but still wasn't my cup of tea. This one however is an absolute beaut, it brings in BMW's new design language for all the upcoming X models. The first thing you will noticed is the massive kidney grilles, from now on all of the BMW X models will have these large, prominent feature to make it unmistakably a model from the X range. The X3 is offered in two guises, the X-Line and the M Sport for those wanting a more sportier appeal, the one I had was the X-Line which in my opinion suits the car better as it gives it that SUV look an appeal, with luxury touches that you'd want in a premium car like this. Touches of brush aluminium and chrome around the car gives it that exclusive look contrasting the 19" rims on the high profile tyres which still ensures that the X3 can actually go on the roads less traveled. The X3 has grown a lot from it's predecessor and it's evident on the side profile of the vehicle and actually makes it look like an X5 at times. The rear end of the car is my favourite part of the new design, those rear lights tie up nicely at the end with a slight high arch which has the emblem sit in the middle. The indented spoiler which follows the lines of the roof also adds more dimension to this. 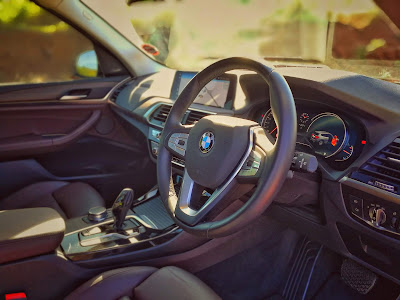 Moving in on the inside is where you realise that BMW are certainly upping their game, and when they say they're giving you a premium car, they mean it. While brown's might not be a fan favourite it certainly is for me, with the X3 coming in a chocolate brown or 'Vernasca' Mocha as it's called in the brochure, with decorative stitching through the seats, doors and steering. The high gloss finish of the plastics really gave that added sparkle and contrasted well with the oak trim on the dash which actually felt like real wood, with grain detailing. Some might say, whats new? It still looks the same! but trust me, after driving quite a few of their cars there is a difference. While key design elements are still there, they are improved with better quality finishes and accents which highlight it. The attention to detail is impeccable, from the brushed aluminium buttons and trims, to the X logo on the inside of the doors which are visible only when you open them. I love what they did with the center cup holder compartment, hiding it away with a pull down roll up style cover. 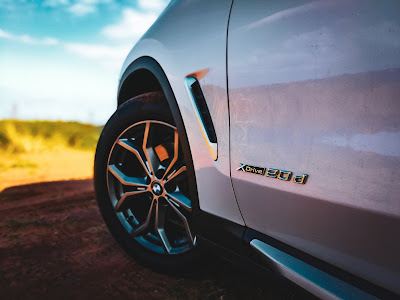 
While this is the baby of the diesel engines, it is the one engine that BMW have earmarked to be a big seller. With the ever increasing price of fuel, the range on the diesel engine will look much more appealing than that of a petrol one, especially on a big vehicle such as this. That being said, this motor isn't a slouch and quite a work horse, pushing you 140kW of power and 400Nm of torque, from the 2-litre, 4-Cylinder TwinPower Turbo engine. Important stat for those in the EU is that the motor record 146g/km, quite significant number compared to its rivals. On the smooth surface, the X3 performs as would any other car from the BMW stable, drives well, I guess you could say the ride is remarkably smoother, I mean having just coming off driving the M240i, this felt like I was gliding on air. The three driving styles as common on BMW's being Eco-Pro, Comfort and Sports are offered in the X3 but make quite entertaining to flick through with the digital instrument cluster changing to suit. Eco-Pro limits the high revs and also has a reduced maximum speed, ideal for driving around busy areas with loads of traffic and aids the already impressive fuel economy which BMW claim a combined of 5.5L/100km.


As mentioned, the ride quality is spectacular, smooth, soft and generally like riding on air. The front passengers can enjoy heated seating, not like we need that in Durban as well as have the option for full electric memory seats, an option that is nice to have but unfortunately one that this model didn't come with. The weight distribution is on point with hardly much body roll when using all that torque when exiting corners. The rear passengers enjoy loads of head and leg room with equally comfortable seating. The panoramic glass roof is huge and really gives the expression "bring the outside" a new meaning, it also has a sliding sunroof for the front passengers to enjoy and when the sun is becoming a bit much, just close the curtain! All BMW X3's come with the automatic tailgate as standard, and it's easily controlled with the car key as well as height adjustable so you don't have to worry about the boot lid hitting anything in a low ceiling area.


The new X3 has a lot of tech to offer, as mentioned before, the electronic memory seats would be a nice option, especially as BMW's seat configurations offer so much more than just moving it forward and backwards. This particular model came packed with some nice options, the heads-up display which has been upgraded with more info and a new style of displaying on the windscreen. LED lights with adaptive high beam assist, bless the feature, I just love it and can't stop raving about it. Another cool option on the X3 and is available on most of the new BMW models is the 3D walk around on the camera package, as demonstrated in the video below, it gives you not only a birds eye view of the car but also lets you look around the car by means of the 4 cameras as it builds the environment up on your screen. It's pretty cool so be sure to click play. BMW's gesture control was also a nice tech highlight, I mean it is easier to just use the volume control buttons on the multi-function steering but it's more fun to wave your hand around like Harry Potter to get it done. The mood lighting choices have increase with dual tone colours, you can really change the interior at night with the various choices of the lighting.

Okay, lets talk about the elephant in the room, this car isn't cheap, coming in at a base price of R690,200 doesn't look that bad at first but after adding your package, colours, extras, it could cost you over a million, this particular car I had, came fitted with R257,565.02 worth of extras...yes I know, you could buy another car with that money but here's the thing I don't understand with people who say shit like that. Will those cars come with cool tech like this? Short answer, no, while people are paying premium they are getting premium for it. If you going to want the coolest things in your car, be prepared to pay the price for it and 9 out of 10 times these extras are worth the money, otherwise they won't make them. The car itself is superb and I can't fault it at all. It really is a well built, all round SAV as they like to call it and certainly a great investment by BMW to invest in the local market by making them in our own country. Here's hoping for a million of these to roll off the production line in Rosslyn. 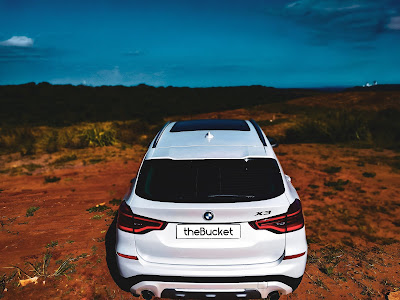