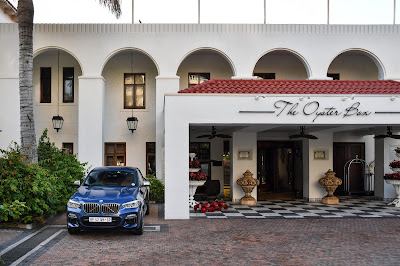 There's a comforting feeling when you get invited to a day launch in your home town. I'm not quite sure what it is about local launches that have me so relaxed, it could be that the roads we're about to travel on are familiar to me, that I know where to push the cars limits and where to be-careful, or it could be the fact that I don't have to travel on the dreaded "red eye" flight to the launch destination. Whatever it was, I was at ease last Friday when I was invited, along with a host of other motoring journalists to sample BMW's all new X4. 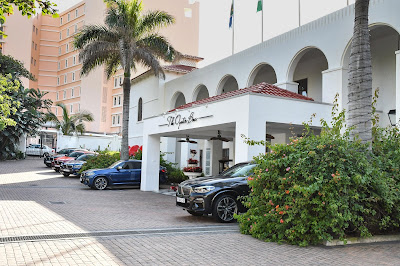 Now for many, the X4 would be an odd car, and I can see where they might be coming from. It's based on the X3 which is a family SUV but made in a sports coupe design, which see's the roof slanted and given a sport back rear end. With the ever growing trend of the market demanding for more crossover options, manufacturers can only head the call of the buyer I suppose and with that you have to salute BMW in it's efforts as global trendsetters, if I may call them that, for developing this once unique but very appealing segment of the "SAC" (Sport Activity Coupe). We've seen many others follow the trend of the BMW X4 since it's introduction to the market in 2014 which sold approximately 200,000 units worldwide, and while BMW may welcome competition, they have to stay ahead of the game and that is exactly what I came to find out during this launch. 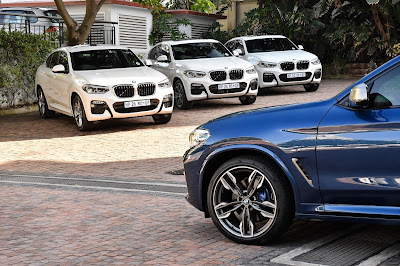 The setting for the morning, Durban's iconic Oyster Box, while sipping my cappuccino and enjoying my savoury croissant, watching the waves break on the shoreline, I was wondering if my day would be as predictable as the tide that morning but rest assured it was anything but. See, having the launch in my back yard gave me an advantage over the journo's from outside Durban. While they were thinking about all the sleep they missed out on, to get to the airport on time for their flight, I got in a bit early to get a get a jump on what models were present for the launch. Being a very sporty orientated vehicle, the X4 is being launch in just 3 engine variants for now. A 2 litre petrol, 2 litre diesel and the range topping M40i (3 litre Twin-Power Turbo) engine of which there were two present. Obviously I threw my stuff in the back of one of the M40i's and took the keys before anyone could see, which made me feel a bit smug. Well in my defense, the chances of seeing the M40i in the Durban press fleet next year are slim to none so I had to get a sample of it at the launch. 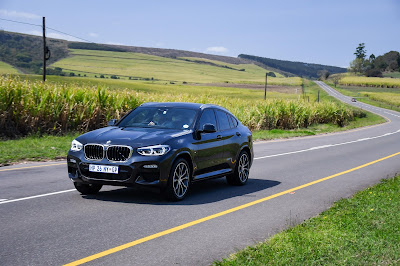 After a brief presentation on the X4, highlighting the significant changes and differences to the new models, as well as giving us some basic statistics on the market, it was time to hit the road. Don't worry, the presentation wasn't boring but I'll fill you in on the important bits as we go along. Now for those who have never been on a launch, you normally pair up with another journalist and your journey to your lunch time stop is split in half. I opted to drive the latter half seeing that it had a more challenging route on what I thought would be quieter roads to navigate this behemoth. My driving experience started in Eston, where I was greeted with wide open fields making it's way into the hills and forests of the  KZN Midlands. The peace and tranquility which is synonymous with the area was harshly disturbed by the violent gurgling and crackling of the twin exhausts from the mighty X4 M40i. The engine is quite raucous as well, but in a good way, it makes all the right sounds that make the hairs on the back of your neck stand when you put it in Sport mode. 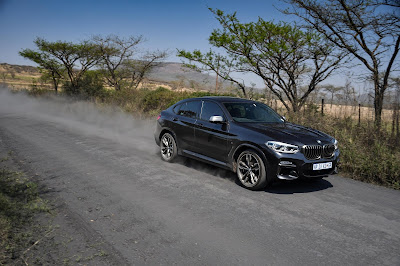 There's no other word to describe the X4 M40i other than a beast, and while I drove the X3 with the very same engine, the X4's lower body, wider rear and longer rear axel give it so much more life. It literally eats up the tar in front of it and with its solid stance, it attacks corners with force and almost feels like it bends the road to suit its path. With BMW's xDrive system, the car picks up which wheels are losing traction when gripping and alternates power to the ones that need it, helping you propel through the twists and bends. That coupled with the reverberating noise from the exhaust just makes you want to keep on going, even if the roars make the wildlife in the area disperse in fear. I was actually quite sad when my route ended up going through the bustling metropolis of Pietermaritzburg which meant I had to tone things done in the M40i but it also gave the car a chance to relax as we navigated the lunch time traffic in EcoPro mode. 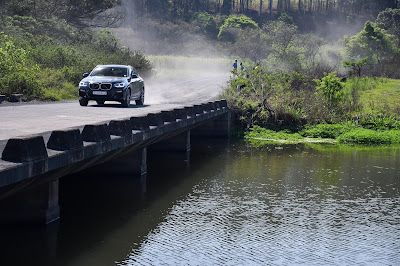 One would say the car has a Jekyll and Hyde complex, but we're in 2018, so let me bring the reference up to speed and say it has a Banner and Hulk complex. In the traffic, while in EcoPro mode, the car was calm and collected but you just know it doesn't take much to let the beast out. The journey to the lunch stop involved some dirt road driving. Now with a car as such, 3 litre, twin power turbo, sitting on 21" rims, not the ideal environment you would think? But that's where you'd be wrong, to quote another Journalist whom attended the launch earlier in the week, "I've never gone this fast on dirt!". Yup, the X4 M40i made minced meat of that gravel track, it unleashed the inner rally driver in me, all those hours spent playing Colin McRae on the PC as a child finally came into fruition as I left a trail of dust behind me while racing to the Karkloof Safari Lodge, to satisfy my appetite that was built up while driving this mighty car. 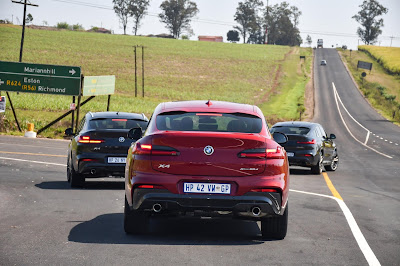 While sitting at lunch, contemplating whether I should skip dessert and rush out on the first shuttle to secure the M40i on the route back, I figured, if it brought me so much joy, imagine what it would do for the next person. So I guess you could say dessert won that one, but it gave me the opportunity to try out another engine variant and one I believe will be quite important to the X4 line up, the 20d. There's no secret that this engine is one of my favourites from the BMW Group, it offers the best of both worlds while making your trips the filling station less frequent. The drive back was quite the opposite with the diesel, not that it wasn't as fun, for obvious reasons it was much more tame but at the same time still quite enjoyable. It gave me time to appreciate what the car offered on the whole. BMW are becoming more of the giving type now, by throwing in a few more freebies in the X4. Like Business SatNav, BMW Connected drive which can be controlled by an app via your mobile device. This allows you to check on critical information on the car, like fuel levels, tyre pressure levels, oil levels, etc and also help you book your car in should there be a problem or a service is required. There's also a few cool things you can do with the app, like pre-set your air-conditioning, so the car is nice and cool when you jump in. 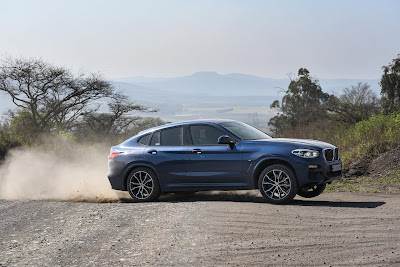 Coming from a person who was not the biggest fan of the original X4, I got to say that there isn't much not to like in the new one. While it may be based on the new X3, there is some major variances in the mechanics of the two, so in essence, the X4 isn't just an X3 with a sexier bum. Yes, BMW have done a stunning job on that rear end, it flows so well and with that rear wing that sits above the windshield, just adds that much character to the overall package. A good thing to note is that this new design of the rear is something we will become used to with the upcoming Z4 sporting a similar design and from the spy shots of the new 3 Series which is due to show its face soon, it too will have its rear lights in a similar style to that of the X4. It this is an indication of what we can expect from the next line of BMW X models, the future for this line is very bright and very eXciting. 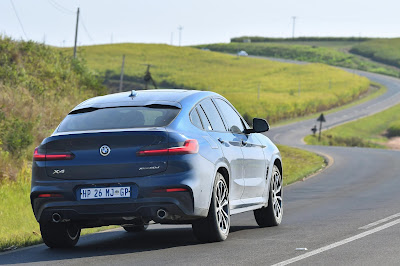 BMW will have the M40d available to purchase from the first quarter of 2019.