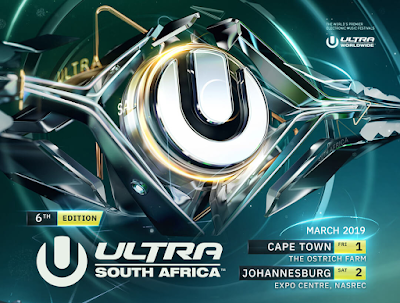 Yesterday Ultra South Africa released their final artist line up for their 2019 festival, while there were not any more international headliners there was an international support act announced as well many, many local ones. In it's 6th year running Ultra SA have ensured that they remained the countries number one dance music festival, with major headliner announcement last year of The Chainsmokers who will be making their debut playing to SA crowds in March, bring with them a unique live experience as they will be bringing down the curtain on both the Cape Town and Johannesburg shows. 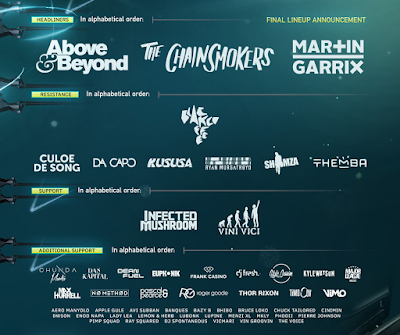 Fan favourite Martin Garrix returns for his 4th Ultra South Africa, having played at the first three events. His no stranger to us and is bond to put on a spectacle as always. Another act that will be making their Ultra SA debut but are no strangers to South Africa are Above & Beyond. The English DJ are set to kick off the headliners at both shows, bringing the crowds to euphoric levels with their uplifting trance beats, and be sure to be ready and waiting in the crowd as you could be pushing that button! With Vini Vici being announced as one of the support acts for the headliners, yesterday another international support act was announced, Infected Mushrooms will be bringing their unique music and style to Ultra SA. With a big fan base locally, there are many who have been waiting to see them perform live in the country. 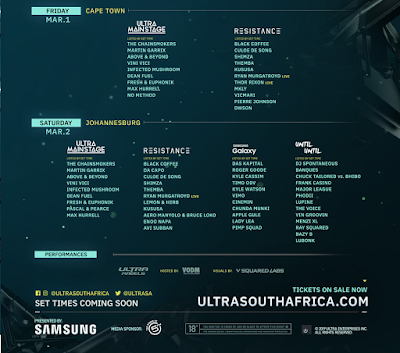 The Resistance stage is headlined by our very own Black Coffee and features a number of top local support acts. Ultra South Africa have also launched a VVIP Table Experience booking which can do so via the website. For more information you can follow Ultra South Africa on the various social media channels or the website.
Posted by Amith at 12:01 PM