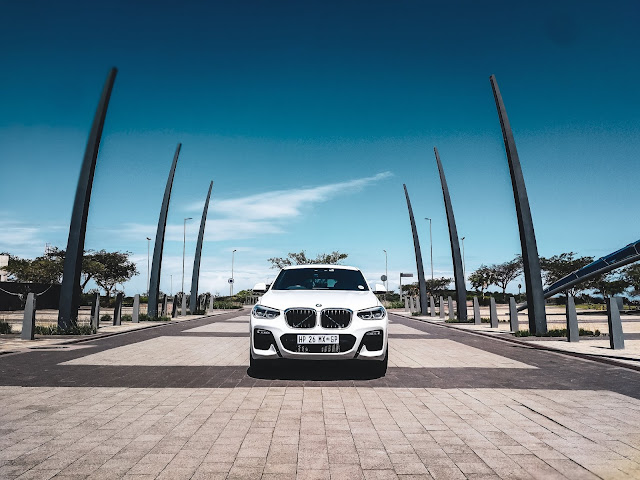 When BMW send press cars for reviews, I always want it to have lots of options, end of the day I am reviewing the car for the public, so what better way for you to find out about these extras than from someone like me right? Fair enough some of these extras are pretty pricey, but once you learn the purpose you can deduce whether it would be something you would need in a car, hence I don't understand some other people in the industry who loathe BMW when they send them a car which has enough extras that costs the same as a small car. The product given is for people with a certain spending power and if Richard who's a CA in one of the top 4 accounting firms wants car that can park itself, then damn right he should get it! Anyway, enough with the mini rant here, it's time to tell you about my time in the new BMW X4, which by the way came packed with extras! 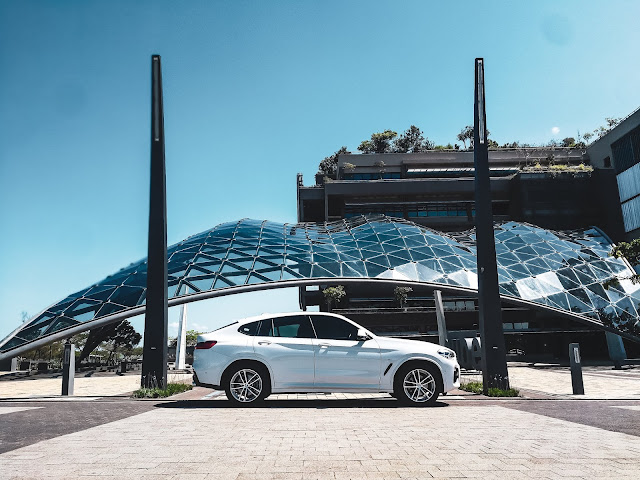 When it comes to these coupe styled SUV's, there is honestly no-one that does it better than BMW. While others may try, their models just look like a giant bubble on the road. The X4's design is primarily based on the X3 and its very evident from the front of the car but as you go down towards the back the profile changes drastically. The car gets wider and the roof slopes to create this fast back kind of rear end. BMW have in my opinion created an extremely sexy rear end for the new generation X4, the previous model didn't have that that booty that made you have a second look. This one however will have you making 3rd looks at it! The rear lights are a major talking point and conforms to the new design language from BMW and I can see why it's ruffling a few feathers, simply because it's new and most in the motoring world aren't used to change but it grows on them over time. I spoke about the X4 growing wider as you get to the back and that's to give it that sporty nature. Even the rear tyres are wider than those up front and this isn't purely for aesthetic purposes only. The interior design is carbon copy of that in the X3 with head room slightly compromised for the rear passengers. Overall the design of the X4 hits the mark on what it needs to be and many echoed the same sentiments as me when they saw it in the metal. 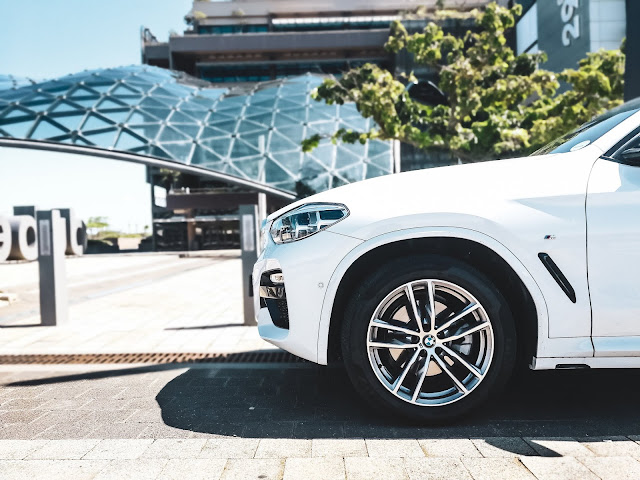 On the launch I got to drive two out of the three engine derivatives that are being offered in the X4 line up, which was the M40i and the 20d, I knew the Durban press fleet wasn't going to get the beast of the M40i hence I jumped on the opportunity to drive it then, and with good reason to as it was a menace on the roads. This time however I got to get acquainted to the 20i which funny enough wasn't one of the two I drove on launch so it all worked out well in the end. BMW's 2 litre petrol engine is one of the most sold across the range of models in their offering and having driven in it in various cars I can see what it's so popular, it produces 125kw and 290Nm of torque . Apart from being so versatile, BMW also makes sure the car it's in doesn't put added pressure on the engine and with the X4 being a big vehicle, the engine seems more than adequate to get you around. Even though the diesel engine might have a higher torque rating, the 20i seems quicker off the pace and there's minimal lag if you have to compare it to the 20d. The car is well balanced and sits on the road like a big SUV should but is as nimble as a sports coupe thanks to the xDrive system. 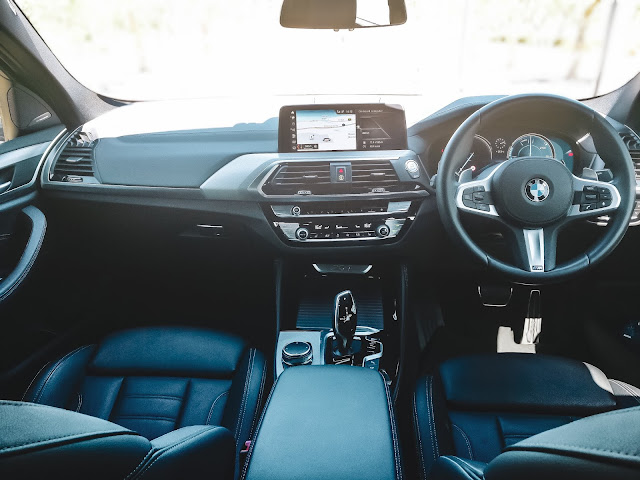 When it comes to comfort, BMW's X range never disappoint, there's always plenty of cabin space for the drive and his occupants, not to mention the huge luggage space. Now with the X4 you'd think some of this would be compromised but you're wrong, yes with the slanted roof there is a slight reduction in head room for the rear passengers but there is still ample space there for two or three adults. The seat's in the X4 are awesome and comfy with a range of colours and designs available for you to choose from when specc'ing your car. The car I had came with Black Vernasca with decorative stitching which looked superb, changing up the game from just plain old boring seats. The car came with multizone climate control, seat warmers for the front passengers, surprisingly no seat coolers, maybe BMW don't see a need for that one yet. The panoramic sunroof is brilliant, allowing lots of natural light to come in and letting in some fresh air as well. The trunk space was decent with me being able to get two bags of golf clubs as well as the kit bags in there with no sweat. 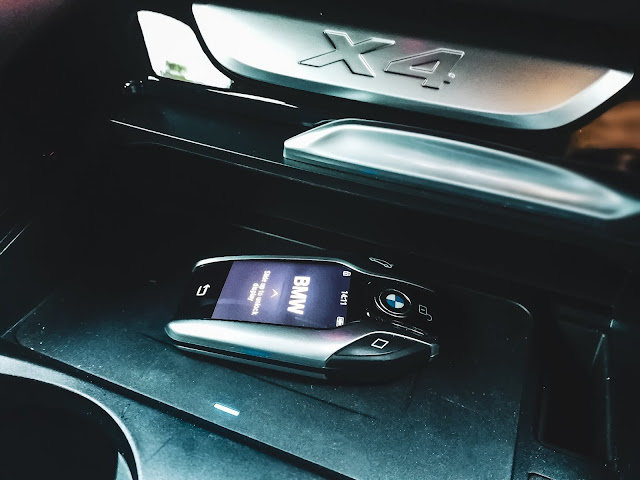 As mentioned, this particular model came packed with extras, most notable was multi-function instrument display which is basically a digital instrument cluster which changes colour depending on which driving mode you're in and it also gives you other various information. Adaptive LED headlights, which for me personally is the best thing you can add to your car, the way it works at night still has me spellbound. The car came with BMW's display key, which is basically like a cellphone, it has a small touch screen where you can access various information about your car, like how much fuel it has, if everything is okay with the car, set the airconditioner to come on at specific times, and of course, open and close the car. It's cool, I won't lie but the battery needs to be charged regularly, thankfully there is a wireless charging mat in the center consol of the X4 which does this for you. Now BMW also has a connected drive app which you can download to your mobile device and will practically do the same things as the display key will do so not sure if it warrants paying R3,650 extra for the key. Electric seats, for me is another must have especially with these new seats that do way more than just go back and front. Heads up display is almost becoming a norm with most BMW models and its pretty handy to have all the info displayed in front of you while driving. 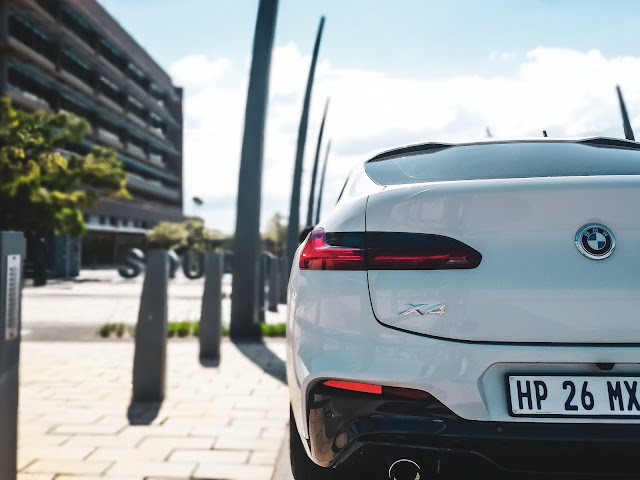 What's not to like about the X4? Was the question I found myself asking, nothing really. It's a great vehicle packaged in an attractive way, its stance wins you over. The engine line-up on offering is great with an even more meatier diesel engine on the way soon as well the range topping X4M Competition destined for SA towards the latter part of the year. It's pairs well with the modern driver, someone that wants the appeal of an SUV but also doesn't mind having a sporty type of drive. The bonus with the X4 is that it can be practical as well. While the option list on the X4 might be long, the standard equipment you get is also quite impressive. I really loved my time with the X4 and was sad to see it go, I guess having a raised coupe sort of was something that suited me quite well, and not face the battles of a regular coupe especially when getting in and out of the car. 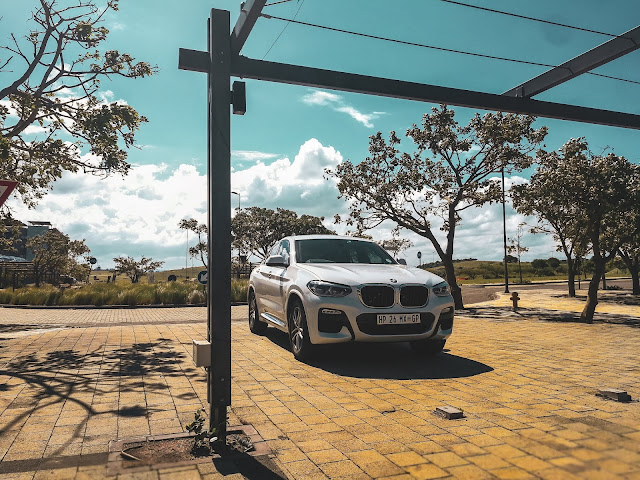