I think it goes without saying that the VW Golf GTI is a pretty iconic car worldwide but in South Africa it has it's own legacy. Ever since the MK1, the GTI offered the driver a car with performance figures that could match most sports sedans on the road at the time, not only with it being a fraction of the cost but also offered better driving dynamics. Being a small hatchback, the car was more agile, more nimble and gave you a rush that no sports sedans could replicate. Till this day, the MK1 is still revered by many and has become a collectors item for enthusiasts, if you have one in fairly good condition, people are willing to pay a pretty penny for it. Fast forward to modern day, with the Golf MK7.5 currently in the market, if you had to look at sales, the GTI and R models are one of their best sellers and in Durban, almost every Golf you see is either a GTI or the R, the locals love it and while it may not be as affordable as it was, it still gives you that thrill as the original did when driving it. I myself up and until this week had never driven a GTI before, so when VW said I was getting the limited edition GTI TCR for a few days, you bet I was busy clearing my calendars to make sure I get to drive it as much as I could during those two and half days, after all what better way to break your GTI virginity that with a model like this? 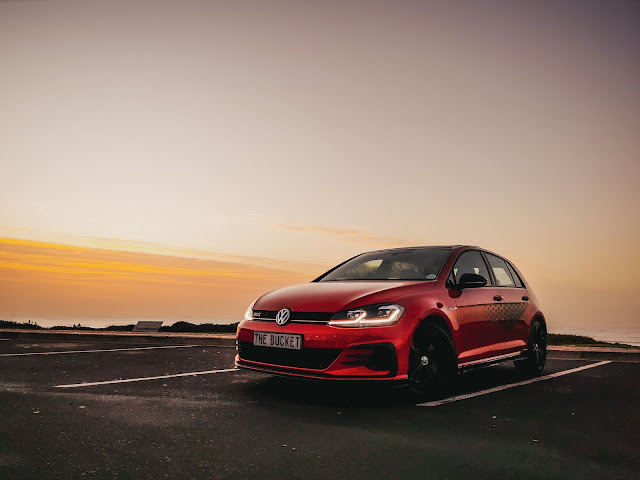 While the normal GTI is pretty menacing in looks, they've certainly stepped up a few notches with the TCR, by adding additional items such as front and rear diffusers along with skirts to match in matte black. Large 19" split-five-spoke rims which expose the large break discs and red calipers with the front ones having the GTI emblem on them. The TCR also receives some interesting decals on the side of the car, which I presume has to do with the name, TCR (Touring Car Racing), this however isn't everyone's cup of tea but for me personally, I didn't mind them. It is quite noticeable and big differentiator when it comes to distinguishing this from the normal GTI. The rear spoiler also gets a nice matte black wing tip, not sure how much that helps with aerodynamics but it does look nice and completes the package. On the interior its your standard GTI look with some additional touches like the sports style seats with scotch finish and red accents. The car is definitely a looker and when driving it around in this eye catching red colour, it had heads turning everywhere I went. 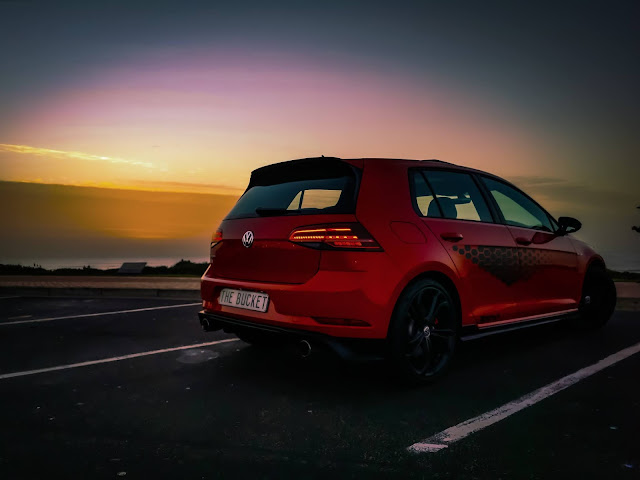 This is where the main talking points come in, as much as this is a limited edition model, with only 300 in the country, people are not going to pay extra for a car just for some cosmetic changes to the exterior but rather what is under the hood. VW have kept the 2.0L turbo-charged engine but upped the anti with it but increasing its performance from 169kW in the standard GTI and cranked it all the way up to churn out 213kW! This along with the 380Nm of torque combine to give you a rapid start off the line, so much so that the tyres get giddy and start to spin as well. The DSG gearbox that its coupled with is just sublime as it manages to hold out for longer revs to get the maximum out of each gear. While there were other limited Golf models like the Clubsport and so on, this one truly is special, and when you get behind the wheel of it you understand that from the get go, any review can give you stats and you can compare it with other models but feeling what the car delivers as an overall package is truly spectacular, also with the GTI TCR being so light weight, it helps a lot with delivering the optimal power to those front wheels, so much so that the only disadvantage to the less mass is that the torque comes in to confuse the equation, hence you get that wheel spin on both first and second gears but it all adds to the experience which is thoroughly enjoyable. 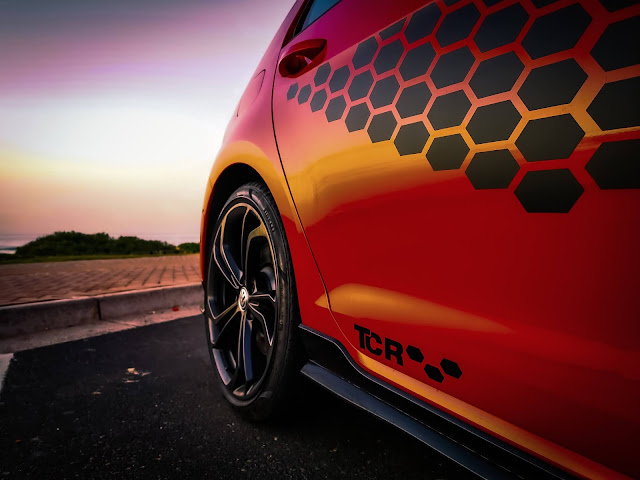 While this is a performance hatchback, it still in essence a Golf which is aimed as a family car and there is sufficient space in the cabin for a small family, it still has a boot that can fit quite a bit of luggage. The seats as mentioned earlier are suede/ material finished, GTI embossed on the top but are molded into a sports seat configuration, bucket style for the front passenger and driver and semi bucket seats for the rear. The car comes with all the creature comforts such as dual climate control, seat heating for driver and front passenger, electrical adjustable seat for driver with lumbar support. The steering wheel is finished in leather with red stitching, the dash has an additional plaque on the passenger side which displays the model number out of 300, which is a nice touch. The ambient lighting as well as infotainment colour theme is red, not sure one can change this but I don't know why you would want to. The ride of the car is solid and even with the stiffer suspension, the comfort isn't has hard as you would expect it to be. Even when sports mode is engaged, which does stiffen things up and makes the exhaust noticeably louder it does make the hairs on the back of your neck stand up and being the driver, you don't really notice much about the ride quality as you are more focused at attacking the next corner with the biggest grin on your face. 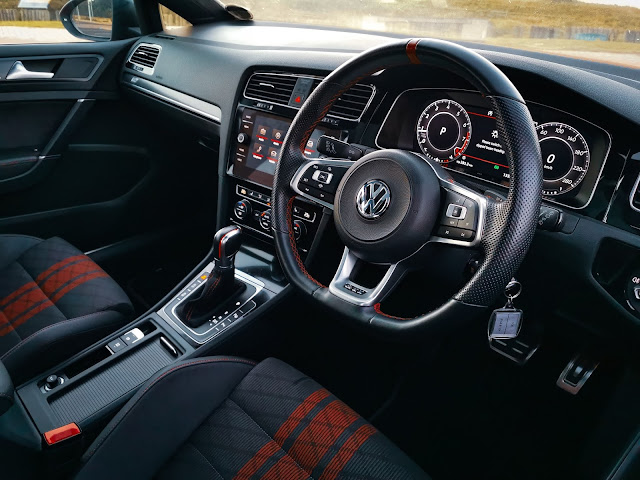 I have to be honest, I was never the biggest Golf GTI fan, not because it was a bad car but because it was so popular with many. I never understood why until I got into one, while I agree it isn't fair to base my assumption on a limited edition variant of the GTI but you have to appreciate what the people at VW have done. Also, what this car means to the petrol heads in the city I live in, which is Durban, I felt that I missed out over the years, to experience what others already knew about but I was just too stubborn to realise. Seeing that this was a limited model and I had number 300 of 300, I did my duty as a Durbanite to visit the popular spots that this car would have caused quite a stir, if we were not being restricted due to Covid. It was almost a homage tour, me getting showing the GTI TCR around town, and so I visited Blue Lagoon, a popular weekend hangout where people brought their GTI's not to show off but to chill out, have a braai and listen to music with friends, then went to Umgeni Rd which on certain nights turns into Durban's famous illegal drag strip where many Golf's have embarrassed the bigger German models and even some supercars and to end things off, I took it to the relocated takeway spots in Umhlanga to have a bunny chow on the bonnet. While I only had 2 days and some change with the model, I think the time spent together has done it justice to give out this review. I will never forget my first GTI experience and it has humbled my overall feel to the legend. Another great talking point is the price, coming in under 700K, and giving performance figures like that, it really is a bargain of note, which is why it sold-out like hot cakes! This is one for the collectors so if you're lucky enough to get one brand new, don't go looking to make a quick buck, rather enjoy the car. 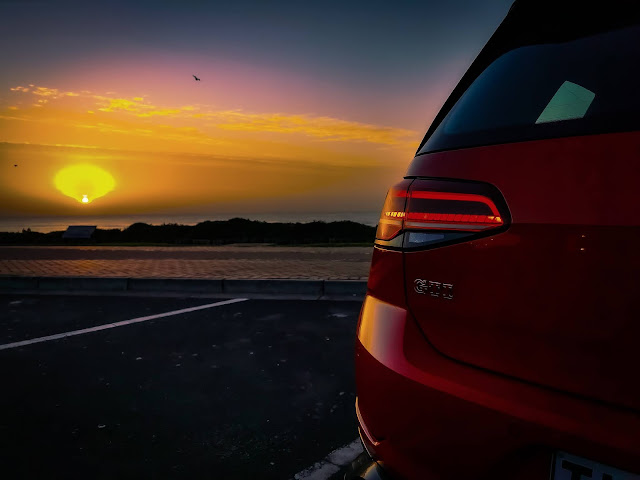