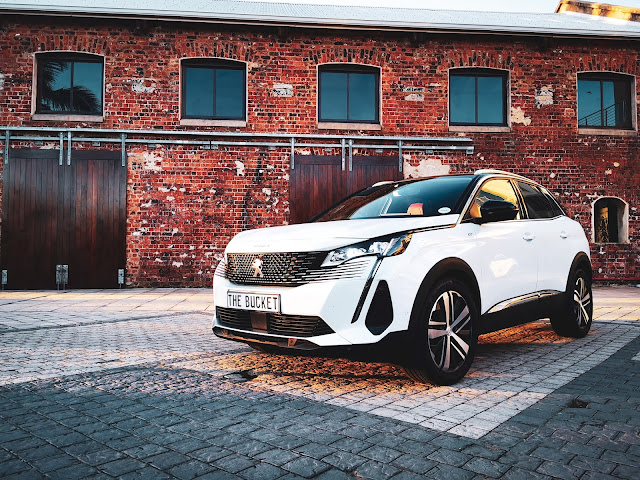 When it comes to French cars, there is always a sense of flair that exudes from them when compared to other European cars, I experienced this with Renault but when my first Peugeot rolled in for a test, the flair just levelled up dramatically. The model was the face-lifted 3008 and personally, if your jaw does not drop when you see this car up close and and personal, you need to be checked if you have a pulse because seriously, this car is a work of art in every aspect of its design. Peugeot really upped the anti in this face-lift with an almost complete redesign of the front as I will discuss later on in the design segment. Much of the rear remains the same with elements to update the design. While the previous model 3008 didn't enjoy much success in the local market, the French brand will be hoping that with these changes, it might just sway prospective buyers. 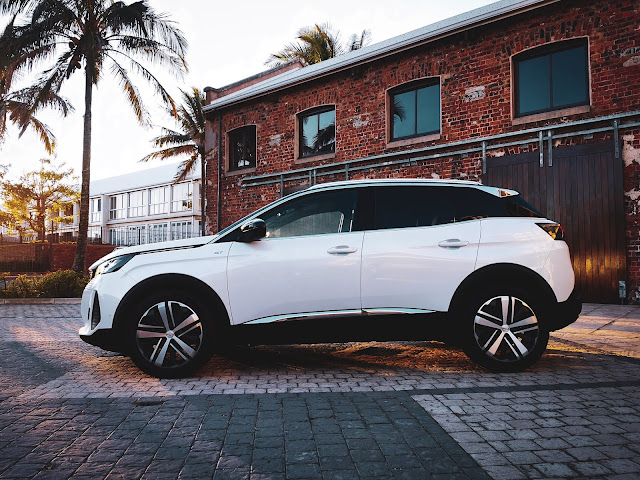 The front fascia of the Peugeot 3008 is fascinating to say the least, with the 3D light grille which is made up of individual blocks which expand either ends to meet the new LED headlamps with clear housing enabling one to see each of the dual lamps. The LED daytime running lights follow the new design language from Peugeot, which mimic the fangs of a Lion which is the brands logo. The rest of the front design is very well sculptured and clean which expands to the side of the body. There are added detailed to the side profile to enhance the cars look, for example the black side skirts and chrome detailing around the windows and doors. The rear end remains visibly unchanged with that sleek piano black style straight feature which houses the tailed which are triple units of the LED lights that really are subtle but very effective, it mimics a 3D claw which keeps in line the feline theme to the car. The rear diffusor is finished off in a high gloss piano black as well, with such quality materials being used on the exterior, it really gives the car a premium feel, so much so that it looks better than the German rivals. It's totally different from what we normally see and its great to see a brand being able to push the boundaries in terms of aesthetics and design. 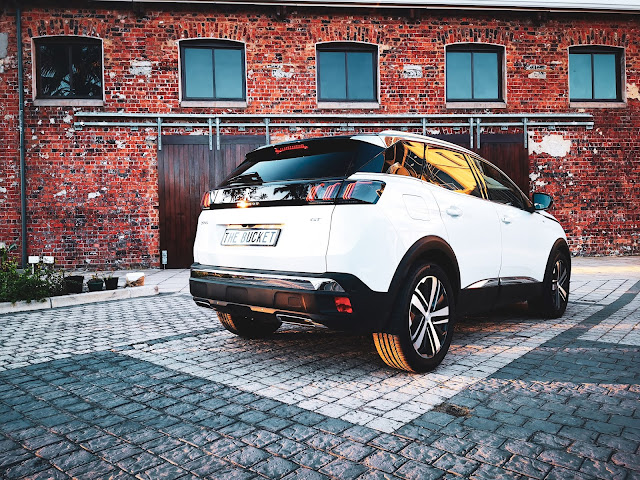 While the car is nice to look at, how is it to drive? Due to the sales figures from the previous generation as well as some smart homework done by the team, they've opted to only bring in the 1.6L petrol powered motor for the 3008. This is paired with a 6-speed automatic gearbox with paddle shift. The engine produces a gusty 121kW with 240Nm of torque. Given the size and type of the vehicle, that power is plentiful and with my time spent with it, it seems like the perfect application given the type of driving the average buyer will be using these type of cars for. While Peugeot claim that the average fuel consumption on the 3008 is around 7L per 100km, I was getting just over 8L with a lot of mixed driving and also having to push the limits every now and then. Taking the 3008 on the open road was quite an experience, the engine coped well on a long distance and the cruise control worked like a charm, this helped reduce my average consumption by allowing the car to dictate the speed and gear changes. 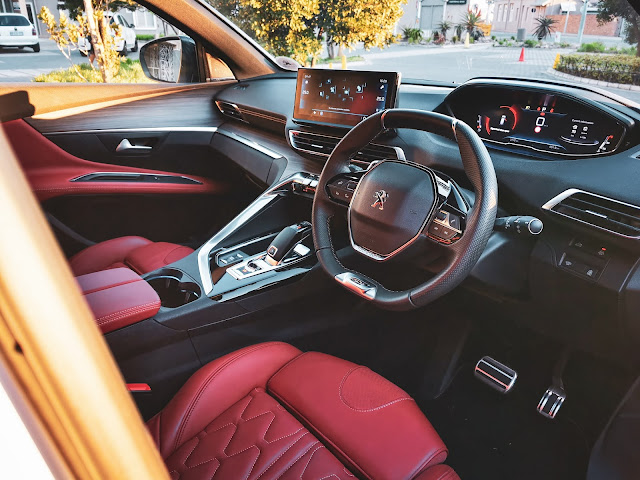 Stepping into the 3008, you will be easily mistaken that you're sitting in a concept model, the styling and materials used has a modern and opulent feel to it. It's almost as if they hired interior decorators to style the cabin, from sporty GT line stiched Nappa leather seats, brushed aluminum switches, piano black accents as well as wooden inlays can be found across the cabin. Even the quality of the leather used on the dash and other aspects of the doors feel luxurious. The design is very modern and neatly laid out to give the driver full control of all aspect to the interior. The car has dual zone climate control for the front driver and passenger, an extremely large center compartment located under the split arm rest that has double the normal volume one might find in a car, it would have been great if they had the option to get this cooled as it could serve as a nice cooler for long journeys. The technology in the Peugeot 3008 has been commended as well, from mobile applications built into the cars user interface to the animations that come standard with the car, the cars digital instrument panel can be adjusted to suit, and when changing the animations really do blow you away. It's done so well and gives you a futuristic feel to it. The car has a wireless charging mat as well as USB ports for conventional charging and app connectivity. The rear passengers also get to enjoy that quality Nappa leather seats, and they have dual USB ports for charging. The sound system is by High Fidelity sound system French company Focal, the quality is great and done in conjunction with the cabin space which maximizes the acoustics . 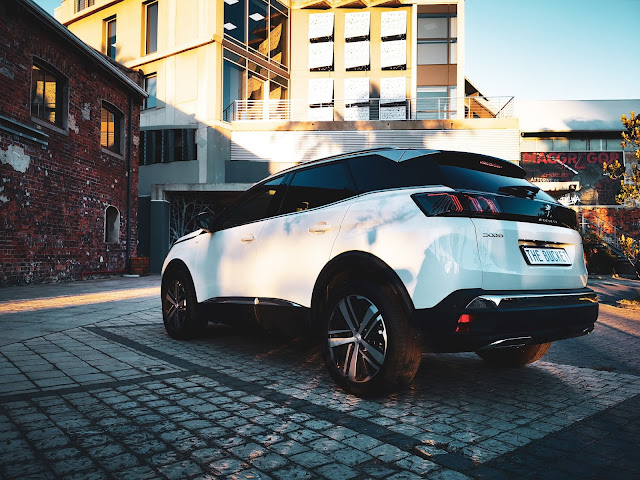 Overall the Peugeot 3008 delivered on so many levels, apart from it being so refreshing to see a brand doing something different, having the performance to back it really adds that extra sense of accomplishment for the brand. It really is a stunning vehicle that probably needs more credit in the market and hopefully see's people opt for something different when looking for a family car. I honestly had such a blast spending a week with this car and its offering, as a journalist it excites you to see a brand go all out and take chances, now its up to the public to take a chance on the brand for doing so. 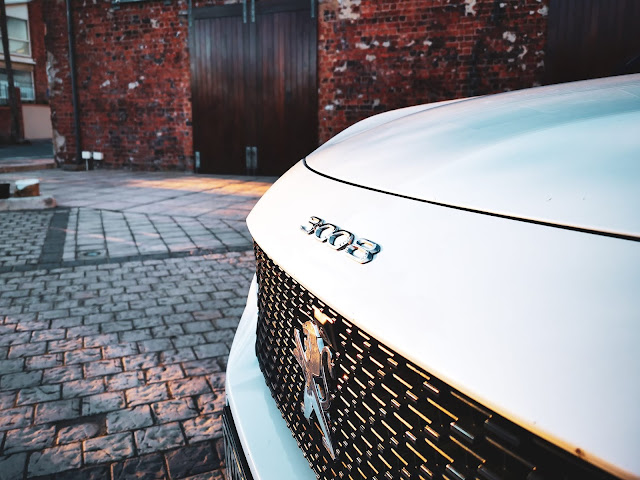 SPECIFICATIONS
Posted by Amith at 2:14 PM