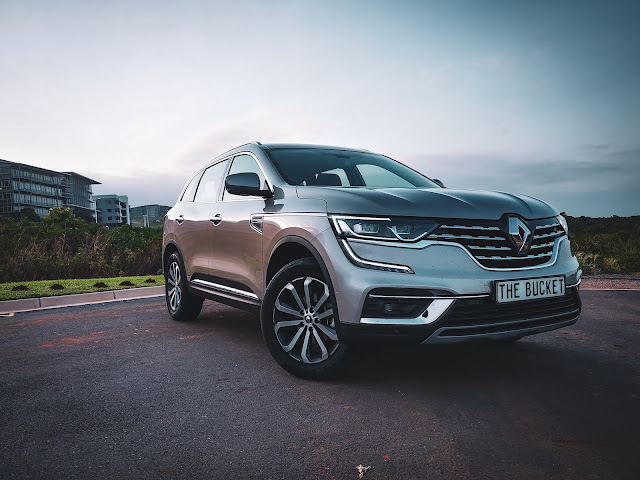 Renault like many other manufacturers have their affordable cars which roll off a certain platform and have similarities along the lines of shared engines and chassis, then they have the premium cars which again, do share similarities here and there, whether it be engines, looks or tech but each has characteristics that make that model standout from the others. One of my favourite models from the French brand spent a week with me recently, and while I used it for my normal commutes, I also had the opportunity to take on a long distance trip, something which needs to be done on larger SUV's like the Koleos. The particular model I had was the new Dynamic CVT 4x4, which offers some off-roading features that enable you to take the Koleos on more adventurous routes rather than just the ones with smooth surfaces. 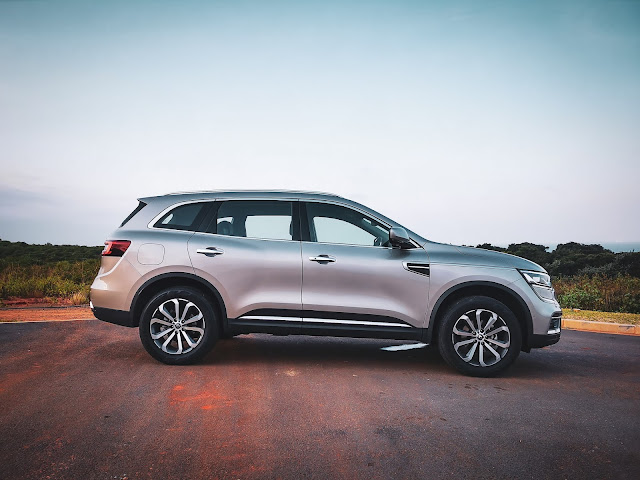 DESIGN
While this shape has been around for a few years now, it really is a stunner, this particular model in "Dune Beige" stood out more than normal and sparkled in the suns rays. It encapsulates the brands design language so perfectly. It looks like they just took lights from the Megane and slapped in on a bigger body but on closer inspection you can notice the differences in size and details that make this more than just a copy and paste job. The lines of the Koleos flow effortlessly along its huge chassis, caressing the large bulges that house the wheels but rather than a harsh indentation, its transitions are smooth and faultless. The C shaped lights really are an eye catching feature on the front end which ties into the large grille that has the Renault emblem bold and center on the top of the frame. Being an SUV, Renault have added some scuff plates on the front and rear finished off in brushed aluminum. There is also some nice chrome detailing which borders and enhances details on the exterior. The rear difussor is finished off neatly with large twin tail pipes. In the interior, the design us much of the same with the center unit being the main feature that houses the large infotainment unit. Everything is well laid out and looks invited to all occupants. 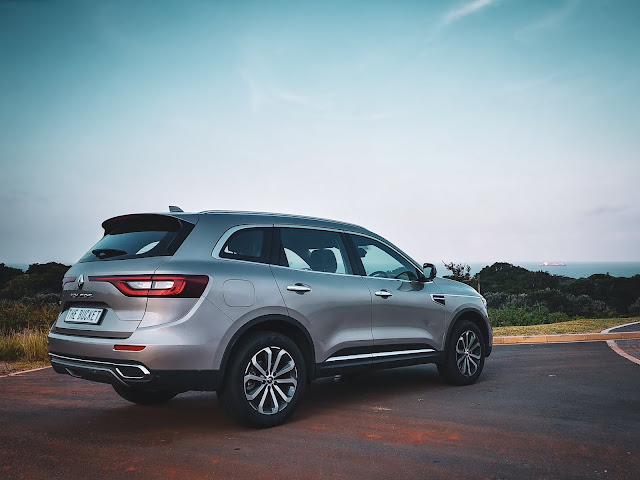 PERFORMANCE
Powered by a normally aspirated 2.5L petrol engine in a world where everyone is opting for turbo powered motors may be frowned upon but in actual fact this engine was quite brilliant to serve its purpose. Producing 126kW with a peak power rating at 6,000RPM, I hardly ever found the need to stretch it to that extremes as the power on tap was more than adequate, this was also assisted by its torque which comes in at 233Nm. These figures won't light up many peoples eyes but trust me, given the purpose of a vehicle like the Koleos, it was sufficient to tackle anything that came its way. The car is fitted with Renault's new X-Tronic 7-speed CVT gearbox, yes that dreaded three letter acronym normally doesn't sit well with many but you have to ask yourself, if it is that bad, why are manufacturers still opting to use the technology? Yes, there is tweaking that needs to be done in certain instances but overall, I quite enjoyed the transitions between gears. There was the odd occasions when down-changing that the gearbox would get confused for a split second which would see it drop from 5th to 2nd but that was vary rarely. While Renault claim that the extra-urban cycle economy comes in at 6.9L per 100km, with my journey the Koleos delivered 7.8L per 100km which isn't the worst but quite far from what the brochure says. 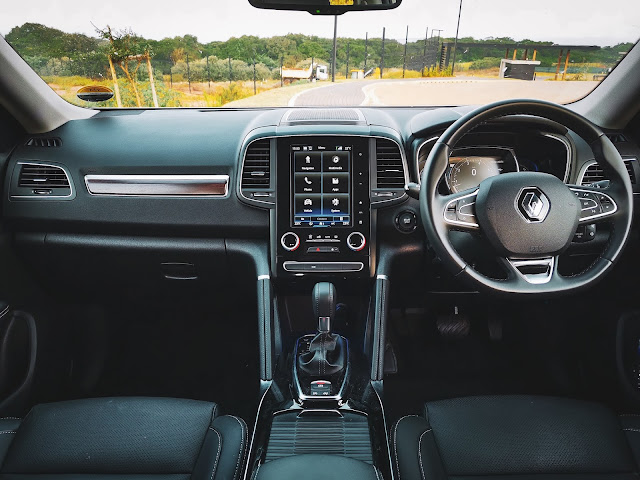 COMFORT
I cannot fault the comfort of this vehicle, infact every Koleos I've driven has been nothing but a pleasure to sit in. I love how well everything is laid out and apart form that, the quality of materials that are used in the car just gives you that premium, luxury feel. This particular model came in the standard black. leather and plastic trim but with some faux wood accents along the dash and doors. While these did look nice, I didn't quite like the feel to them as they felt a bit plastic. The ambient lighting in the Koleos is gentle and not brash like most other cars that we're seeing. End of the day you want to sit in a relaxed environment, not one that mimics a nightclub. The seats are big and comfy with ample leg room for front and rear passengers. The front passenger and driver have dual-zone climate control which is adjusted via the large touch screen as well as the dials that sit below it. The occupants in the back don't receive their own zone of climate control but they do have dual USB ports to power their devices. The Koleos does come with built-in mobile apps for CarPlay and Android Auto which is loaded by plugging in the phone to the front USB port. 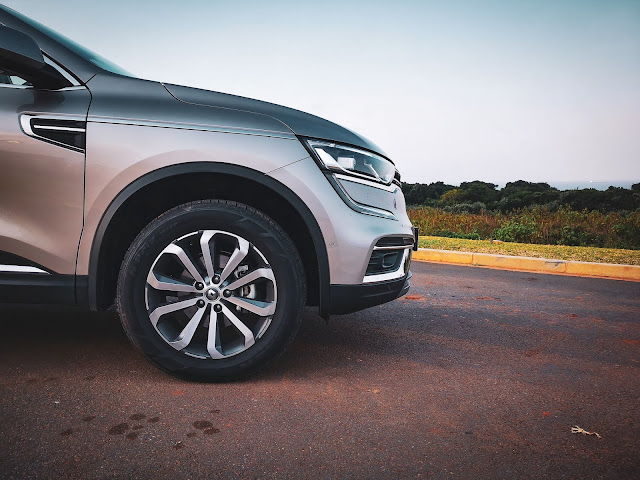 VERDICT
Overall the Koleos is a no fuss kind of SUV, its large, practical and functional. It has loads of luggage space, more than enough space for a family to travel on long distances. It makes cruising enjoyable again, with this 4x4 offering it allows you to venture off the beaten track to do more exploring as well as enjoy your surroundings while doing it from comfort and luxury. It really is one of my favourite larger SUV's on the market, what would make this model even better is a diesel engine offering but for now this petrol variant is pretty good too. 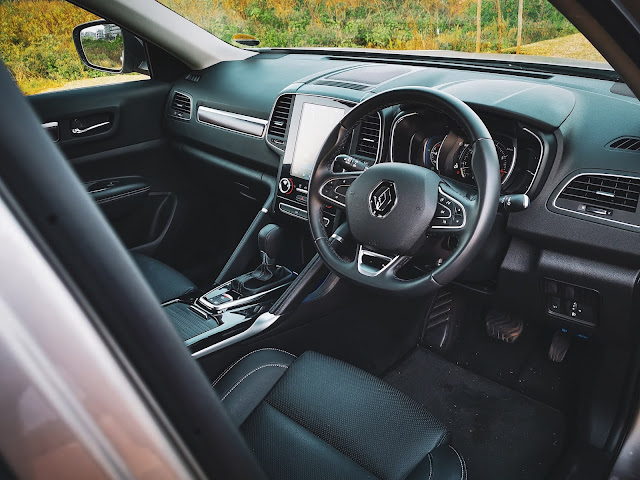