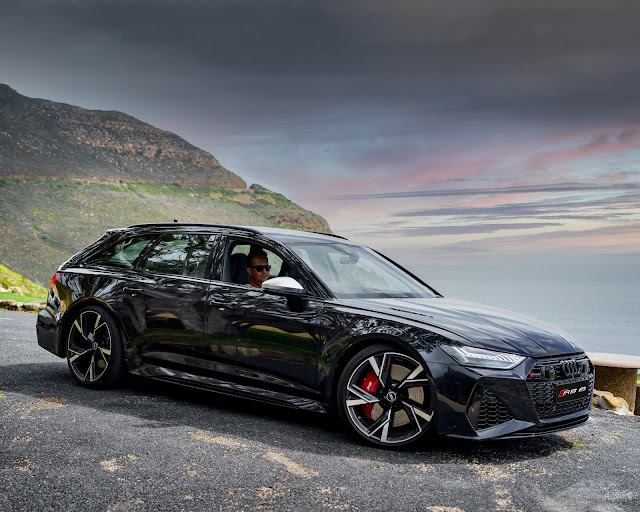 In March this year I was invited by Audi South Africa to sample an array of their performance models in Johannesburg, but due to other commitments I was unable to attend. This was a sore one for me as I knew I would miss out on seeing the entire Audi Performance arsenal and the chances of me experiencing them in Durban would be slim to none, which is why I set out to go sample at least one of their high-end performance models in either Johannesburg or Cape Town when the chance came available. About a month ago I arranged a visit to the fairest Cape, as luck would turn out, it was a long weekend and what awaited for me at the airport can be best described as the baddest wagon in the world, the Audi RS6 Avant. While wagon's aren't the most popular in South Africa, this one is special and it garnered interest wherever I went, with those young and old fixated on it as I drove past them. Just looking at it, let alone the violent burbles of the exhaust, you know this isn't you average family station wagon and this is what the RS6 Avant has become synonymous for world over, it has a cult like status where it is admired and in some cases worshipped. While the likes of the M5 and E63 AMG still predominantly focus on the sedan, Audi have taken a different approach with their fighter and my God have they delivered. 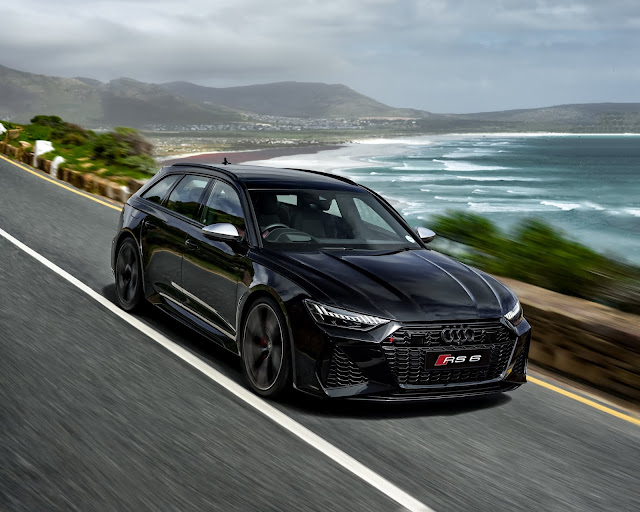 The RS6 Avant's design can be described as menacing, while stealth in appearance, its anything but, the wide body, bold lines and striking silhouette will have you engulfed as it seems like time stands still when looking at it. To say it has presence is an understatement, it commands your attention even when standing still. While there are many aftermarket body kits that are available for the RS6 Avant, in my personal opinion they aren't needed since Audi have done such a fantastic job already. It's taken the normal RS6 body work and enhanced it to suit, with wider wheel arches to accommodate those massive tyres, enlarged air-intakes which are functional for cooling, massive 22-inch rims with red brake calipers, this particular model came with the "Black Styling Package",  which Audi black out the badges and the most of the trims around the car, giving it that stealth like look. The interior design is pretty much the same as you would find in the newer executive type Audi's with the added high-gloss black accents and carbon fibre like textures on the dash. The virtual cock-pit has a few cool animations to make it seem more sportier, especially in the RS Mode configuration. 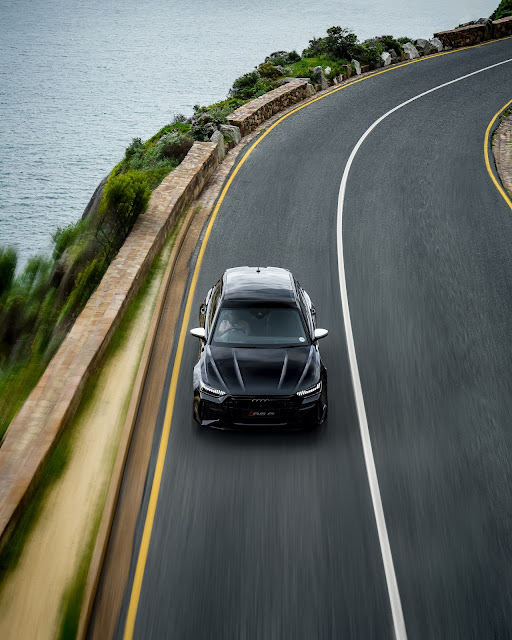 There's only one place to start with this car and that is with the mammoth 4.0L twin-turbo charged V8 engine that resides underneath the massive hood. Delivering an exhilarating 441kW with 800Nm of torque, this thing scared every living being as I ripped into Chapmans peak on my arrival. The raucous noise that is delivered by the massive twin-tailpipes is more addictive than any banned substance you know, it just makes you wanting more and more. The engine is connected to an 8-speed tiptronic gearbox that works in harmony on auto delivering high-revs with optimal gear changes when needed, manual mode can be fun with the use of the flappy paddle gearbox but I would recommend getting used to the car first before attempting to unleash your inner Schumacher in this. The car is big, its heavy but its also quite forgiving, which many feel is a bit of a spoiler by Audi, while I understand their point of view, one has to understand the amount of power this car generates and having these extra safety mechanisms in place, protects the driver and the car. That being sad, with its 800Nm of torque, the RS6 Avant still propels itself from 0-100km/h in a blistering 3.6 seconds, and that is what has been said by Audi, there has been many independent tests which prove it can do it faster, conditions dependent of course. That is blody staggering for a car of this sorts and just goes to prove the type of vehicle Audi have produced. While the standard Audi RS6 Avant has an electronically limited speed of 250km/h, this particular model came with the RS Dynamic package which pushed that top speed up to 280km/h, not that we can do such speeds on public roads but its nice to know the option is there. Having had the chance to drive this car through some of the world's, let alone the countries best driving roads, it's safe to say that this car can do it all, feel the back kick out a bit as you accelerate up Franschhoek pass, hearing the 5th and 6th gear max out as you fly over the Three Waterskloof Damn, watching the sand kick up from the road as you blast through R44 from Hermanus, it really leaves you feeling invigorated, it was almost a form of therapy for me and I'm sure many other petrol heads will feel the same after stepping out of this car. 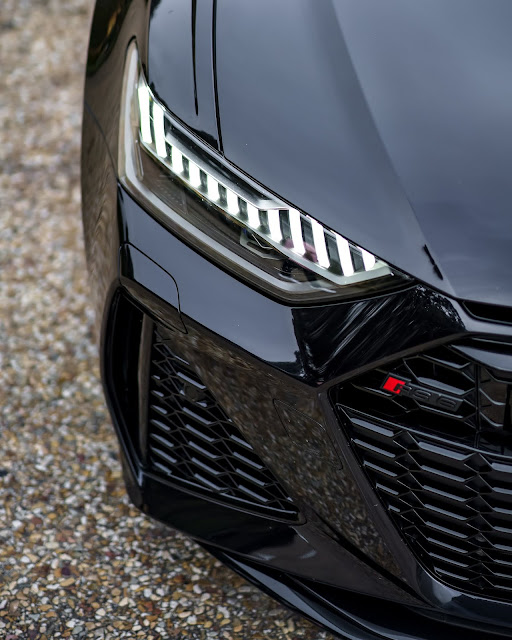 This car is all about comfort and practicality while having a monster under the hood, I wouldn't say its a Jekyll and Hyde because just by the styling there is no hidden complex when it comes to the RS6, you know its a demon! With the regular styled Audi interior, the highlights of the RS6 Avant are the sport styled bucket seats with detailed stitching and RS logos in the seats. For the front passenger and driver, it has seat heating and dual climate control. For the rear passengers, they also get to experience those great sport styled seats with stitching as well as seat heating and dual climate control. While the car rides on 5-V spoke trapezoidal style 22-inch rims, the ride is remarkably smooth and one would imagine with a profile of 30 there would be a lot of road noise in the cabin but its minimal so much so that the noise from the exhaust or the Bang & Olufsen sound system drowns it out. This car came fitted with about R360,000 worth of extras, which is a lot, enough to buy another car with but when buying a car of this nature the type of extras it has available will also want you ticking most of the boxes. Stuff like the virtual cockpit plus which allow for that RS layout display, Park assist plus which parks the car itself as parking this monster can get a bit tricky especially when parallel parking in town. Lane change assist with Audi pre sense rear which warns when traffic is oncoming when backing out of spaces as well as the full driver assist package with cameras which were set off a few times while I was driving since people cannot stay in their lane. 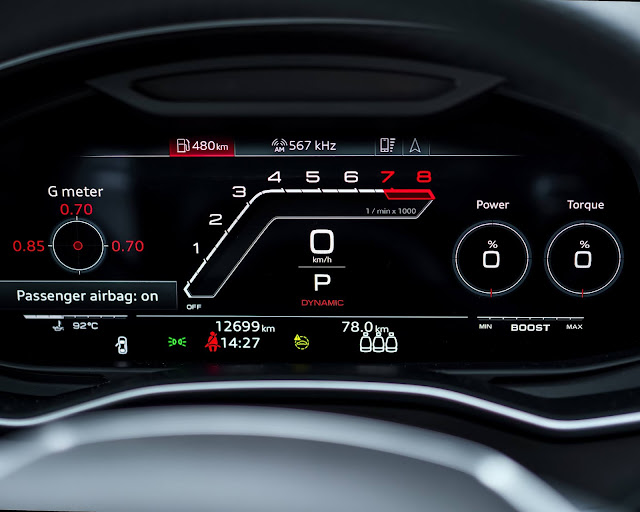 I've waiting a good few years to get behind the wheel of the RS6 Avant and Audi have knocked it out the park with this C8 edition of the car. The colour alone, which was an optional extra, Sebring Black Crystal Effect was hypnotizing from the first time I laid eyes on it at CT International Airport, and made handing back the keys even more difficult. I guess the only easy part was knowing I didn't need to fill the 73L tank again, since my average fuel consumption was sitting close to the 17L per 100km mark. This car is for the person that wants performance and practicality, I've seen guys with previous generation Audi RS6 Avant's with baby seats in them and when switched over into comfort mode it can be driven like a normal car and achieve 8.8L per 100km,  so its not always an petrol thirsty car. With my short time with it, there was zero chance of me trying to achieve that figure and I don't think I even had it in any mode apart from Dynamic and RS. Being a wagon, it also means you have a massive luggage space with 565L to load and if need be the rear seats fold down to give you 1680L, so again the practicality of the car shines through again. While I understand this car isn't for everybody, you have to experience it to make your mind up about it. There's so much to love about it and while most brands stray away from bringing wagons to the country due to its poor appeal, I applaud Audi for bring this one and the RS4 Avant here as they really are something special.