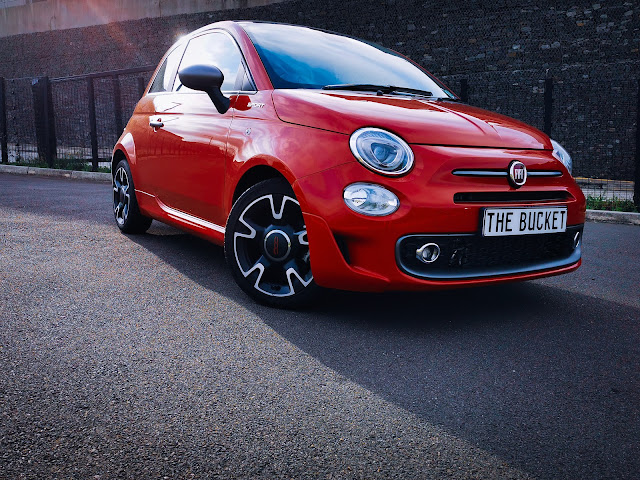 The FIAT 500 is an iconic car, not just for the brand but for vehicles in general. The shape is famous world wide and its easily identifiable, what is truly great about the FIAT 500 unlike some of the other small icons of the past is that the size has stayed generally the same. The cute stocky nature of the car is still the essence behind the brand and while the car has grown slightly over the years, it hasn't transformed into a completely different car, unlike some of the iconic cars of yester-year like Mini and the VW Beetle for example. The model I had on test was the Sport version and while it looked pretty much like your standard 500, it did have some sporty elements to help distinguish it as a sports model, I'll go into detail of that in a bit. Now, many who know me and my size were probably sniggering to themselves when they saw I was driving this car, as I am not the smallest guy around and driving a tiny car like this might not have been the best fit for me but truth be told, I didn't really mind it as I will explain now in the review of this FIAT 500 Sport. 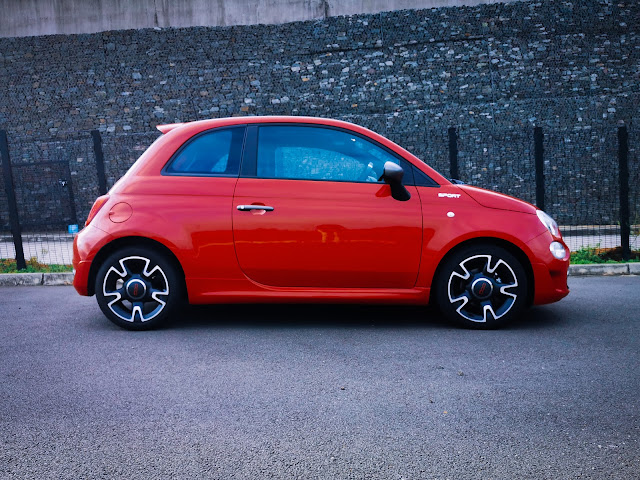 As far as the term icons go, the FIAT 500 is definitely one that many motoring enthusiast would agree is one. The Italian car maker first launched the model in 1957 and was initially known as "The Cinquencento", it was marketed as a cheap, functional and economical town car and to much extents it still is that but evolved along the years to bring in all the new technology and safety features required in our modern era of motoring, the dinky size of the car and shape still remains the same making it the perfect little run around for town driving. The styling has evolved as well, giving the car a modern interpretation of the classic design, keeping those iconic lines and Italian flare. The unit I had, came in Passion Red and being the Sport, changes are made to bumpers, side skirts giving it a more dynamic look and attitude, along with a rear spoiler to complete the sporty look. In the front the grill is more pronounced and there is front fog lights with chrome detailing. The FIAT 500 Sport receives 16" Alloy Wheels which come in black with brush aluminum outlines. Just incase all this sportiness isn't enough, they slapped a "Sport" badge on the side above the front wheel arch and the side mirros are finished off in black too. Another addition is the panoramic sunroof which really makes the car look great with the black roof contrasting well with that Passion Red paintwork. 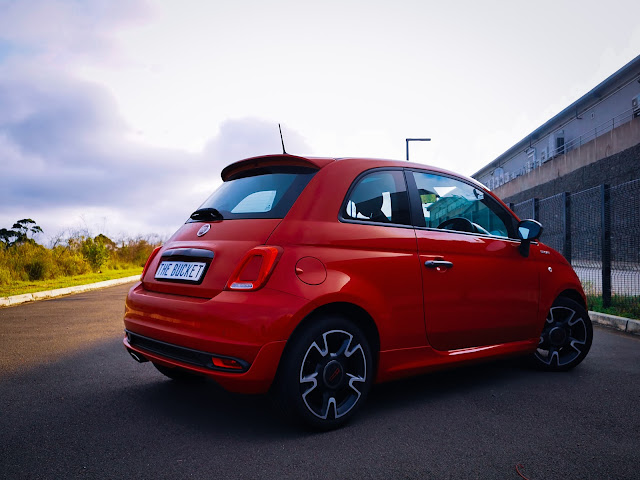 With the FIAT 500 being so tiny, you don't need a mammoth engine to power it, neither can a mammoth engine fit in it as well but under the hood you'll find a 0.9L front wheel drive motor that delivers 62.5kW of power and 145Nm of torque, its basically a go-kart, you're driving a go-kart but with a shell of a well equipped car, now while many might be thinking, what can that little motor do? Well a lot in a car like this! Remember the car is tiny, weighing in at 930kg's, this car is actually quite punchy when you driving it. That 5-speed gearbox is a charm to use and with the small steering wheel it gives off that perfect go-kart like experience. With the short wheel base and great turning circle radius, the maneuverability of the 500 Sport is exceptional, apart from driving around town, in and out of parking lots hasn't been as fun for me until I got this car! Front wheel suspension is independent-wheel, MacPherson type with lower transversal wishbone secured to an auxiliary crossmember, anti-roll bar connected to the shock absorber while the rear is inter-connected wheel through torsion beam and anti-roll bar. Fuel economy on the 500 Sport comes in the same as the others with a claimed 4.7L per 100km, with my rather rash driving style I was getting little over 5.6L per 100km which still isn't too bad, maximum speed on the car is maxed at 173km/h. 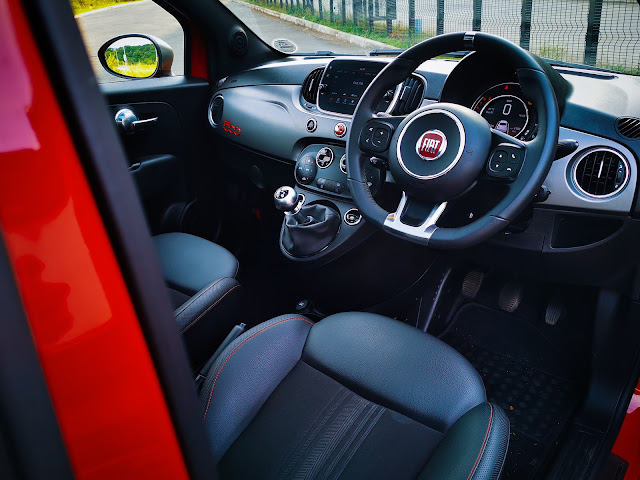 Now with a tiny car like this, there surely can't be a lot of room in the interior and yes, you are correct, it is a bit cramped for large guys like me but was I uncomfortable? The answer is no, the seats are well designed  and have great leather finish with the 500 sign stitched in, making it not only look great but super comfy as well. There was more than adequate room for me to sit, which obviously compromised the leg room for the rear passenger but the way the cabin is designed, it makes everything more functional for anyone to drive the car. For example the height of the gear selector is higher than what you'd expect it to be, sitting just below the climate control panel on the dash, making it easy to reach and change gear. The car has a nice large 7-inch touch screen infotainment screen which has an easier to use UIF but also has pre-loaded mobile apps for Android and Apple phones. The instrument cluster is fully digital as well and has incorporated everything quite neatly in its single circle design. The quality of materials used in the cabin is amazing, I honestly thought I'd be in for a lot of cheap plastics but truth be told, I couldn't find any, even the leather steering wheel is wrapped in feels so luxurious. One thing that took some getting used to was where the window buttons were, but that wasn't really an issue but just something one would have to adjust to when having this car. The cabin features lots of chrome detailing and 500 badges on the dash and front seats. The rear seats are also finished off in that great leather but with the tight space, rear passengers will definitely feel cramped and might suffer from motion sickness if traveling at high speeds. The boot is indicative of the size of the car but not bad in terms of practicality, you can drop both seats to increase capacity as I even managed to get my golf clubs in there! 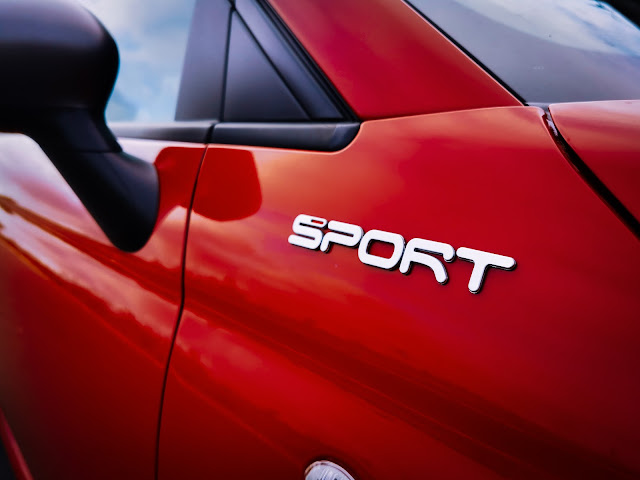 When people look at cars in a practical sense, I don't think the FIAT 500 will come to mind quite often, its size is one of the main reasons for this but when you have to think about who the buyer of this car would be and what reason they are buying it for, it starts to make a whole lot more sense. It's the perfect town car or for running around in our modern terms. Its small, light on fuel, great on short distance driving. Has more than enough room for your shopping trips, commute to and front work. While you may think this would be more aimed for students or females, I actually loved my time with it, it made for a fun commute to work in the morning. The boot had enough space for my laptop bag, lunch bag and gym bag, with space for some shopping. Lunch time trips in the car was fun, as everyone wanted to go with me even with the coupe doors and tiny rear passenger space. While some will say the novelty of this car will ware off, I beg to differ, the driving experience alone will make you feel like a kid with a new toy every time you get behind the wheel of it. The brand still remains true to what the essence of the car is, an affordable city car, so it stays on brand and does so brilliantly.