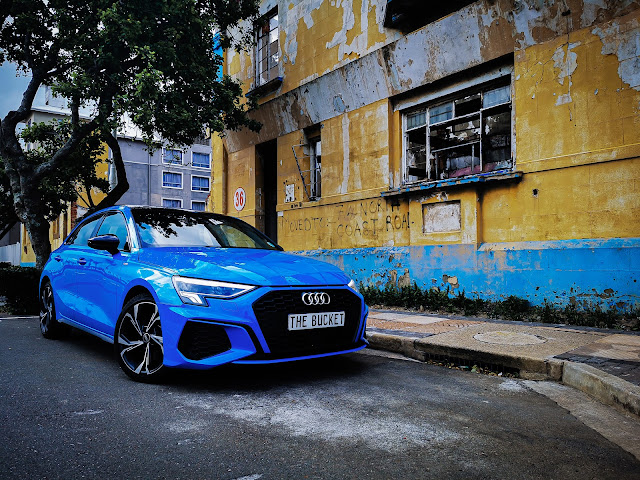 Audi's A3 has always been an important model in its line-up for the brand, it's one of the most preferred medium sized premium car in its class. Offered in both a sportback and sedan, both variants seem to do fairly well in the local market and its really difficult to say which one outsells the other. The latest generation in the A3 was launched in Q3 of last year and I had the chance to sample the S3 which I reviewed in October 2021, which really did whet ones appetite as to what we can expect from the much anticipated Audi RS3 but while these performance versions of the A3 are the ones that draw all the attention and limelight, with the ongoing increase in fuel prices, it's models like the one I'm reviewing today that might start to be appealing to many. Also what is interesting to note, that VW have opted not to bring their full engine line-up for the new Golf 8 and are sticking to just the GTI and R might see prospective buyers cast their eyes onto Audi for models like the 35 and 40 TFSI's. 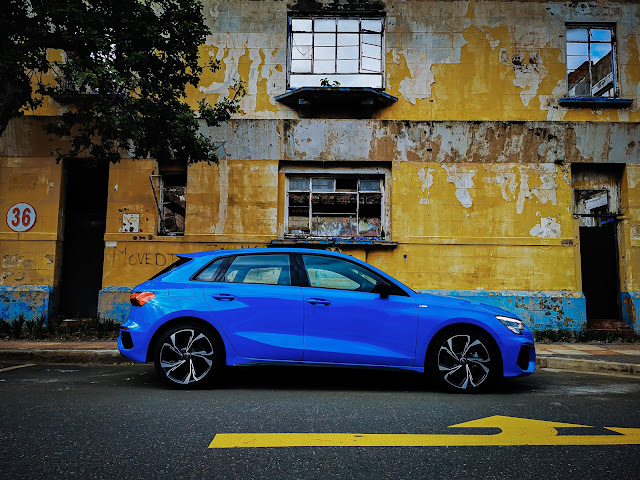 DESIGN
The design of the new generation A3 is superb, its bold and striking with the new grille being the focal point of the car and the edgy headlamps with its matrix LED system that adds the aesthetics to capture the eyes of people as it cruises past. This particular model in Turbo Blue and the S Line kit exudes sportiness, side profile of the car is extremely sleek, keeping that low stance exuding that sporty look. Being the sportback model there is no boot, and it tapers off to the the hatch shape with rear almost as striking as the front, with the rear light also featuring a LED design that includes the welcome dance when unlocking and locking the car. The S Line kit gives the rear bumper a menacing diffuser with imitation vents either side finished off in that honeycomb grille styling. On the wheels, 18" Y-Spoke graphic grey, diamond-turned rims adorned the car, while there is a 19" rim on offer, I think this would be the preferred choice. On the inside, the entire design and feel of this interior seems on a class of its own when compared to other cars in this segment, it's very modern, mature, full of tech but minimalistic in its own right. Everything is driver cockpit centric and fits the new Audi design language to the T. 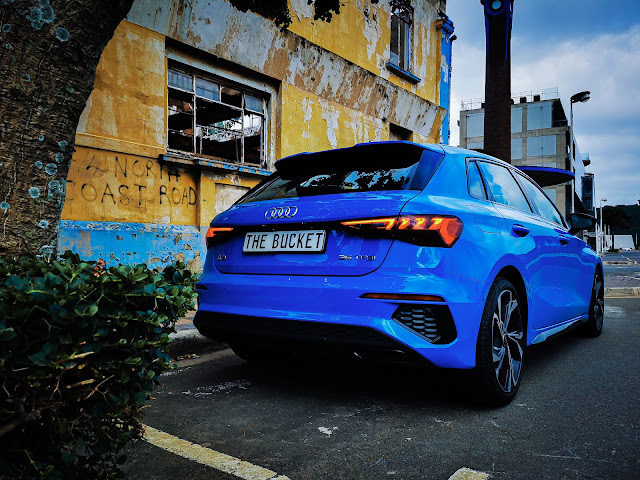 PERFORMANCE
While only powered by a 1.4-litre turbo-charge motor, you won't find this car struggling with performance. It's pretty nippy with the engine output coming in at 110kW and 250Nm of torque, all this is controlled by an 8-speed tiptronic gearbox which is sublime. I know its not the S tronic box that many are used to on the higher end models but is better suited to this smaller engine. It offers better gear ratios in the various driving modes, ensuring maximum power delivery while still being economical. Mind you when driving in dynamic mode, fuel economy isn't the first thing on your mind and experiencing what this engine can offer, you'll soon forget about what your fuel average is as this car can deliver on performance, fast acceleration with a 0-100km/h time of 8.2 seconds, minimal turbo-lag and with the low center of gravity you get from the cockpit, it just makes the whole experience quite exciting. This model didn't have the four-wheel Quattro drive system but still felt very planted and quite easy to control around the bends. Composed driving with this car gave me an average fuel consumption of around 7.8L per 100km, almost bang on with what the brochure claims for urban use. 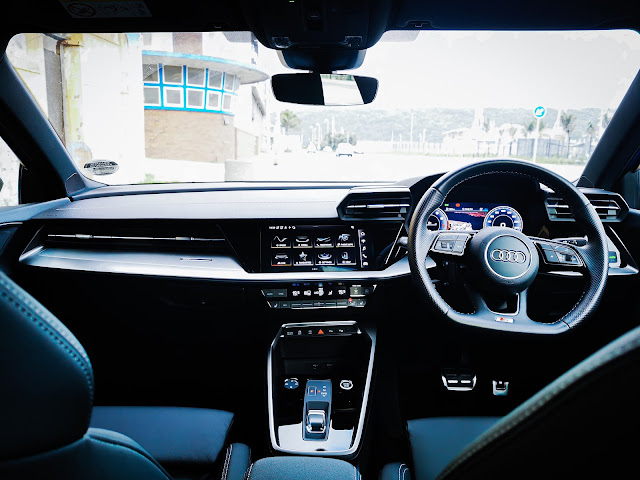 COMFORT
This car is much lower than I expected it to be, given that it is a sporty hatchback, but even with you being so low the ride quality was still quite soft and comfy, I think the 18" rims played a big role with that as you would experience a bit more bumpiness had it been fitted with the 19" options. The car has dual-zone climate control for the driver and passengers, with the large panoramic sunroof, keeping the temperature regulated while the hot Durban sun beamed down onto that glass roof with the curtain open isn't easy but the A3's coped quite well to keep the interior cool. Being fitted with the S Line kit, the interior options included a leather arm rest, "Dark Aluminum Spektrum" finish on the dash, outlines and doors. Audi S Line emblems on the door plates and seats, pedals and foot rest in stainless steel and sport seats for the driver and front passenger with the option of having the seats fully electric and memory settings. The steering wheel was the famous leather-wrapped multi-function plus wheel with paddle shift for that 8-speed gearbox and the signature flat-bottom. The car comes with Audi's latest MMI touch screen interface with Audi Connect, which has built-in mobile applications, a virtual cockpit for the drivers instrument cluster and that Bang & Olufsen Premium Sound System with 3D sound which made cruising around town all that more enjoyable while listening to your favourite tracks. 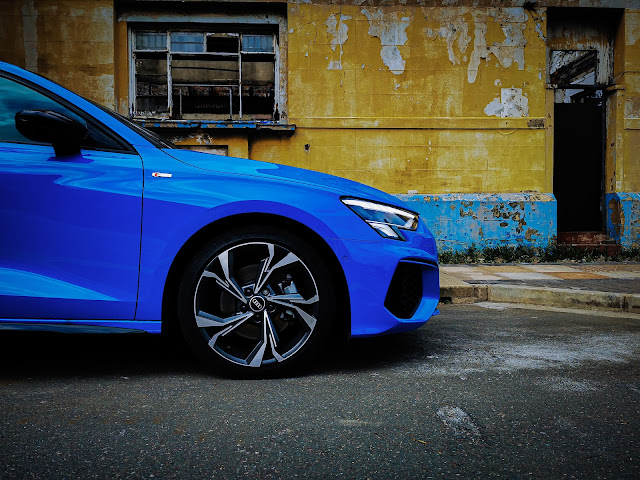 VERDICT
Overall the Audi A3 was nothing short of sublime in my books, spending a week with it really opened my eyes as to why this model has been so particular well received by many in the past. It's so much more than just a premium hatchback or sportback as they like to call it now. It's definitely grown and matured to be quite a versatile car where it could be appealing to a youngster looking to upgrade to a more premium car, an ideal vehicle for a small family with ever the option to get it in a sedan format. The level of technology that this car comes with is similar to that on the higher end models so you know you're getting the best of what is on offer from the brand and that is something I really like that from Audi. Like I said at the beginning of this review, with VW opting not to introduce lower end engines to their line-up, this might be worth a look for others, yes pricing will be a bit steeper than what you'd expect a Golf to be but given the base price of R601,000 that still is R80,000 cheaper than the GTI so it is definitely an option to consider. 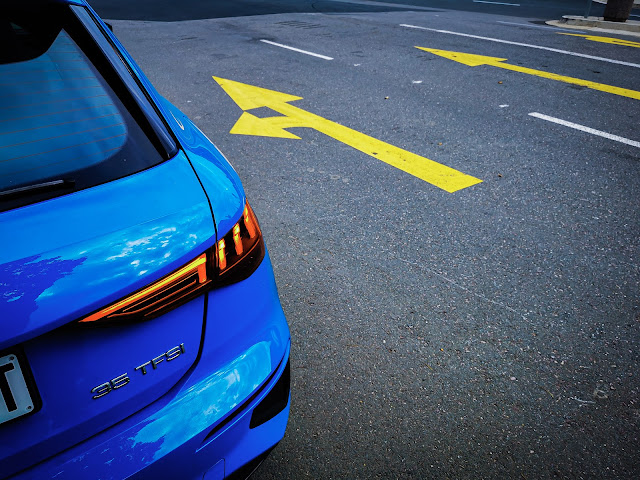