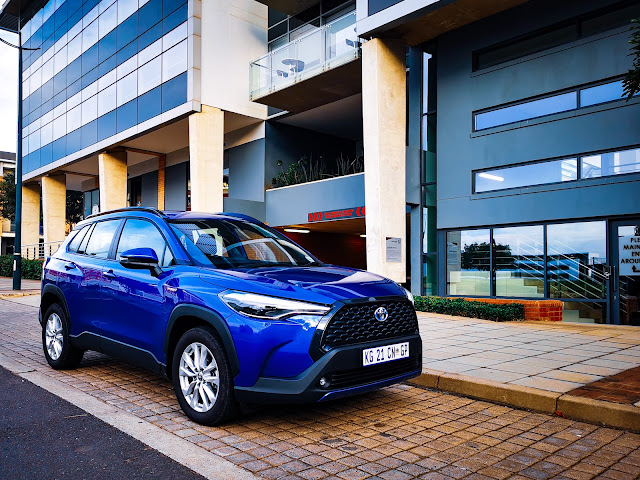 It's probably the most important car that Toyota SA has produced in a long time at it's plant in Prospecton, Durban. If you're a local to the city you would know that the area is basically now a mini Toyota City with the motor manufacturing giant occupying majority of the industrial area in Durban's famous south basin. While the plant was famous for producing the Corolla and Hilux over the decades, it's now got a new golden child coming off the production line and that is the all-new Corolla Cross. Toyota, very clever with their thinking opted to make a cross-over version of the much loved Corolla making it the 3rd variant in the offering from the Corolla badge, with the Hatch and Sedan being the other two. What makes the Cross so special is that it also comes with a Hybrid engine option and it's produced locally as well, making it the first model to be locally produced with a Hybrid engine. Exciting times for the plant as they will gain major brownie points in terms of produced low emission vehicles and could pave the way for other Hybrid or EV cars to be produced in South Africa. I recently got to spend some time with the entry level Corolla Cross Hybrid, the Xs and here are my thoughts on the car. 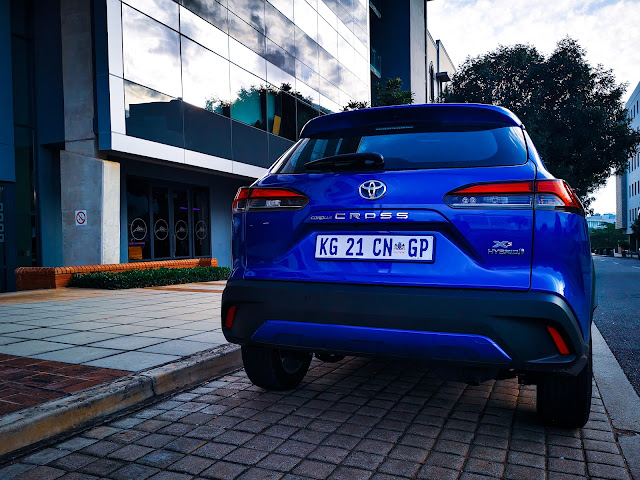 I'm a massive fan of what Toyota have done with the new Corolla, the sharp edges, sweeping design, futuristic head lights and well rounded off rear end is very attractive, so when I heard about the Cross, I thought it would be much of the same but I was wrong. The design of the Cross seems to be very conservative when compared to the corolla. No sweeping lines, not sharp edges just a no thrills, no fuss design and while it might not jump at you in the pictures, in the metal is does look a big better. I can understand the thinking behind this decision by the design team seeing that it is a brand new model and one they expect to get a lot of sales from, but personally I would have liked a bit more flair to it, I wasn't that wrong in my thinking because shortly after its introduction, Toyota released a list of styling enhancements for the Corolla Cross, to give it that certain something extra to make it stand out. The interior remains exactly the same as the rest of the Corolla range and for me that is perfect because the interior is one of the best on the market given the pricing, its stylish and form functional which is most important in a car like this. 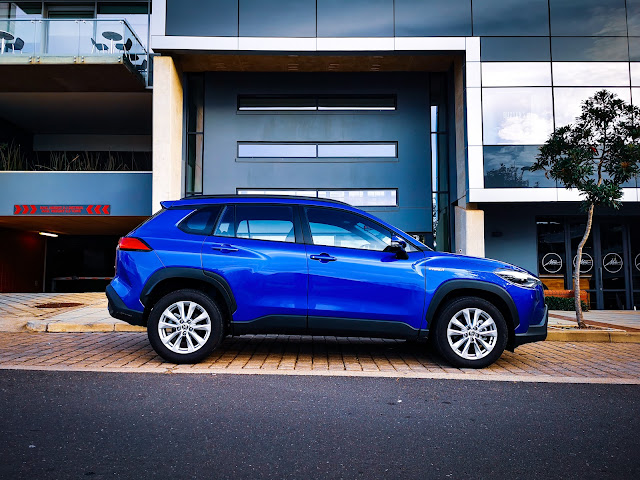 So the first question I got when people saw me driving this car was, "how's the fuel economy"? And it's quite a valid question in the greater scheme of Hybrid engines. Given the ever rising fuel price, the cost of fully electric vehicles, these Hybrid vehicles are the best option for many to counter the high prices at the pump. When it came to the Corolla Cross Hybrid, from the time I got the car, the average was sitting at 5.0L per 100km, the highest it went up to was 5.5L per 100km, which for my style of driving is unheard off, I tend to be a bit heavy on the foot and even though the car was fitted with that infamous CVT gearbox that groans more than an angry mother-in-law, the car seemed composed at every opportunity and delivered the right amount of power the wheels when needed. The great thing about the Hybrid engine is the silence on start-up, you'd have to check your instrument cluster to realise the car is running, the car uses electric power until it feels that the electric motor can't deliver adequate power required and then the petrol engine kicks in. While many say it can do a max of 50km/h before the engine starts, at times I managed to get up to 80km/h on electric power. A great feature is also the coasting mode where you'd be doing a constant speed on the high-way, like 120km/h and the combustion engine switches off and the pace is maintained by the electric motor. This all aids that great average economy and saves you on your pocket without having you at the pump as you would with a normal car. 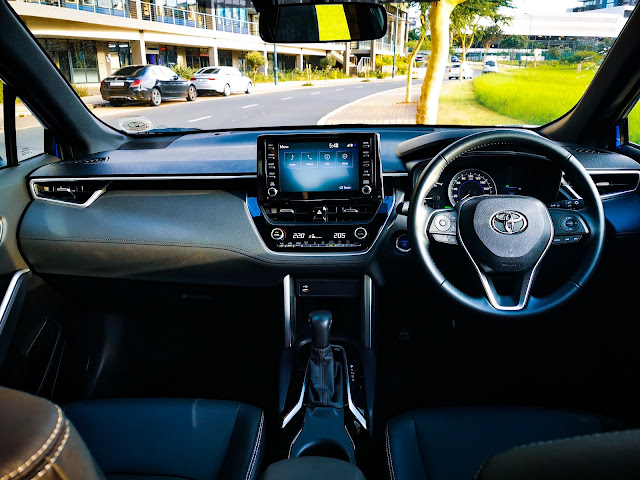 Another thing people asked if the batteries had any negative impact on the car, given that they weigh a lot, people might think this would hamper the balance and even take up space. The answer to both those questions are no, you don't even know the batteries are there thanks to a great design from Toyota. Remember they've been producing Hybrid cars longer than any other manufacturer so they know all the tricks to this technology, in fact they're the brand I trust the most when it comes to Hybrids. Many tried and have failed with the power re-generation, hence they had to swap over to plug-in hybrid models but with Toyota and Lexus, this has never been the case. Coming back to the comfort factor of the Corolla Cross, it rides just as well as the hatch and sedan, its honestly one of the best in its class, being a cross-over you'd expect the ride height to be increased, I mean I did but it remains the same as the others, it might be slightly higher but its definitely not noticeable when you're behind the wheel. In saying that, you'd not going to be venturing up Sani Pass in this thing but rather around town and picking up the kids from school, and for that its perfect. There's no compromise on creature comforts in the cabin with you still getting dual-zone climate control, a big fancy touch screen infotainment center that has built in mobile applications for ease of use. A full multi-control steering wheel and premium feel leather seats, loads of safety stuff including an array of airbags. The cabin space is more than adequate for a family of five, the luggage capacity is huge as well. 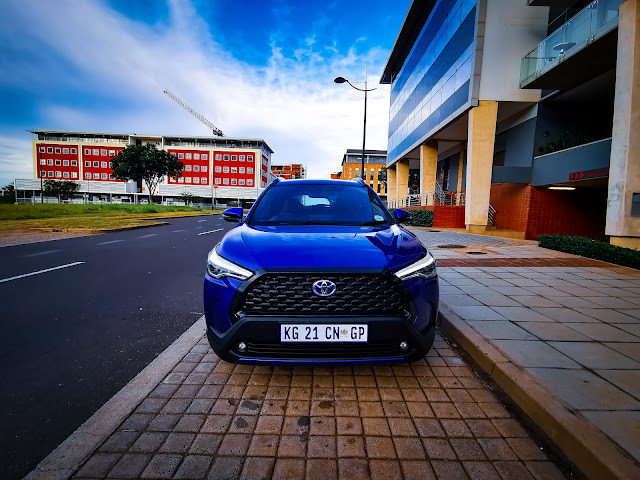 At the beginning of this review I said this car was going to be very important for the brand and its already proving to be, with sales hitting new highs for the brand in this segment. It's over-took the Corolla sedan sales which was a tough act to beat but with such an attractive price tag versus what you getting, its a no brainer for many to opt for this. As mentioned, with the various styling packs available now, it gives customers a chance to individualize there Corolla Cross,  I played around quite a bit on the online configurator and think I've settled on my ideal styling for it, now I got to make some money to buy one. This particular entry level model will set you back about R413,000 and truth be told its perfect for your everyday needs but then you look and see the top of the range Xr model is R440,000 so if its in your budget, it might be worthwhile paying that little extra to get the car fully loaded with everything on offer. 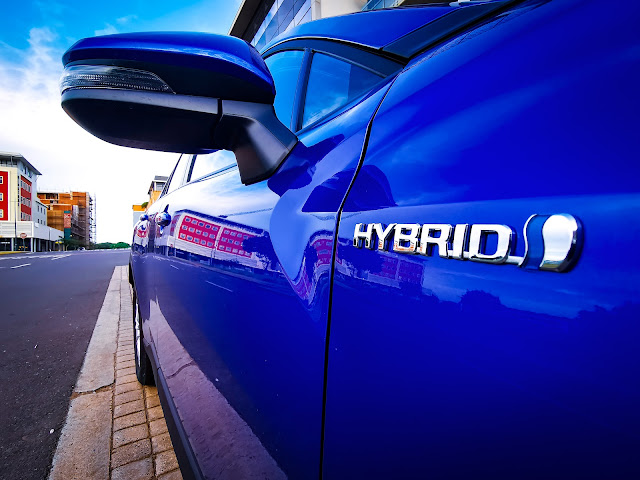