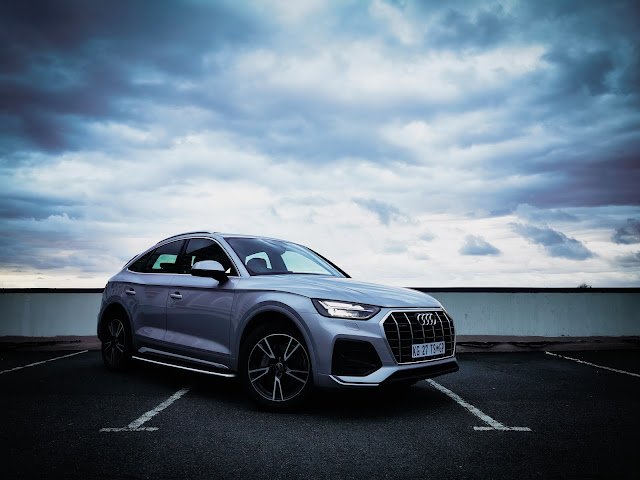 When they first were introduced to the market, SUV coupes just looked weird to me, like a misfit if I had to use a better description for them. The lines were not symmetrical, the designs had no flow and in all honestly, they looked like a giant egg driving around the roads. While my opinions on this new segment wasn't the greatest, the market proved me wrong with many taking a liking to them and hence many brands started following suite in creating them for their line-ups. Some, did better than the others but with the growing trends in SUV's, it gave the potential customer and nice variety of models to chose from, if you wanted the practicality of an SUV with large storage capacity, you'd go for the conventional shape, but if you were the type of person that wanted a sports coupe but had to compromise with the wife to get an SUV to suit your family needs, this was your blessing in disguise option. Audi was a bit late to follow the trends from the other two German giants but my word have they done a stunning job on the SUV Coupe's they've released, starting off with the eye catching Q8, then last year saw the release of the Q3 Sportback and now, the Q5 Sportback. I spent a week with the 40 TDI variant of the Q5 Sportback and here are my thoughts on it. 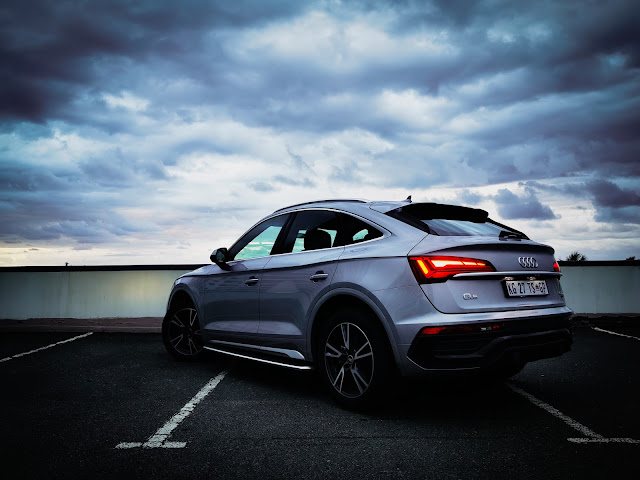 Being a raised vehicle, suitable for large families, getting the proportions on a car like this is always going to be tough but Audi have done a sublime job with the Q5 Sportback. It looks sleek no matter which angle you look at it. The silhouette of the side profile is elegant and proportional, while there is no escaping that egg like look due to the drastic change in the roof line to achieve the coupe look, Audi have done a fantastic job in adding elements that create more attention to somewhat distract you from that. For example the side steps finished off in silver give the car that lowered stance and sporty look from the side. The silver trimmings both in the front and back are quite striking as well, while the overall shape is generic to the Q5 range, the sloped tailgate is where the Sportback element comes in and boy does it look good, with a spoiler on the top and a fin at the bottom giving the car a dual spoiler look. The rear bumper and diffuser is blacked out with the twin tailpipes molded in at the bottom to complete the look. It's a very pleasing design which is accentuating by Audi's infamous Matrix LED headlamps and tail lamps that is a great design feature in its own right apart from being a functional element. 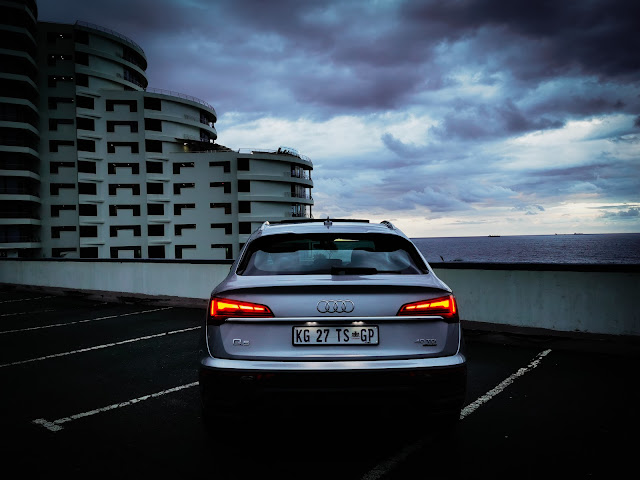 The Q5 comes with two engine options, the 40 TDI diesel or the 45 TFSI petrol, we had the diesel option with us and driving the Q7 with the V6 TDI engine last year, it was nice to see how the smaller engine would be in an SUV like this. The 2.0L turbo diesel motor proved to be quite an exciting engine to propel this car with it boasting 140kW and 400Nm of torque. While being a coupe, it's still in essence and SUV so I wasn't expecting any blistering pace from it, as the figures indicate, the Q5 is capable of going from 0-100km/h in 8.1 seconds and has a top speed of 220km/h, neither of which I felt necessary to test out because with this sort of car I enjoyed just cruising about in it. True to form as always, Audi's diesel engines are something to be admired, with low revs equating to decent fuel economy, giving you a great rand per kilometer value for your fuel. The 7-speed S Tronic gearbox also assist largely in this aspect with slick gear changing when required. The tank size on this car was 65L and gave a range of close to 900km from urban driving, so long distance would be even better. 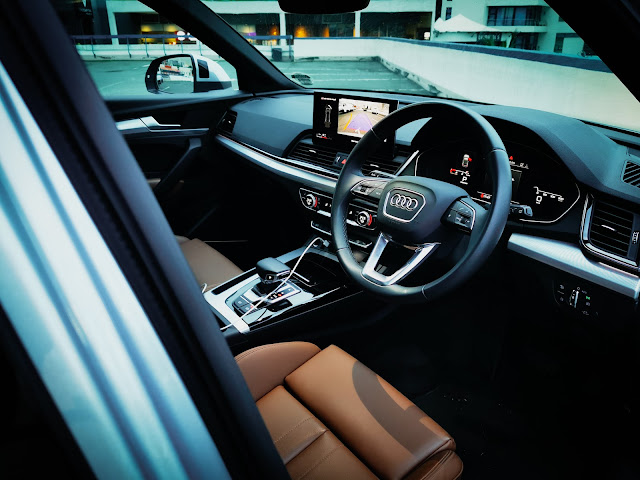 If you thought the exterior was great to look at then you'll be blown away with the interior as well. While this interior still falls under the outdated Audi look, they have enhanced certain features to bring it up to speed with the tech being rolled out in the other models, with a large TFT touch screen which features Audi's MMI Navigation plus and Audi connect navigation and infotainment services, this all comes part of the Audi's Technology package which is a R33,000 extra and also includes that delightful virtual cockpit plus fully digital instrument cluster. The other additional package that was included in this model was the "Comfort Package" which includes the likes of power adjustable front seats, seat heaters for the driver and front passenger, 4-way lumber support for the front seats, electric steering wheel adjustment and storage and luggage compartment package for extra convenience in the cabin. The car has a 3-zone clime control with driver and front passenger getting their own zone and the rear passengers having their own adjustable zone. I just loved the colour of the seats, "Okapi Brown" as the name on the websites suggest but its much lighting in real life, so more of a mocha colour to me. While not the best combo with a silver paint, it really did look warm and inviting. 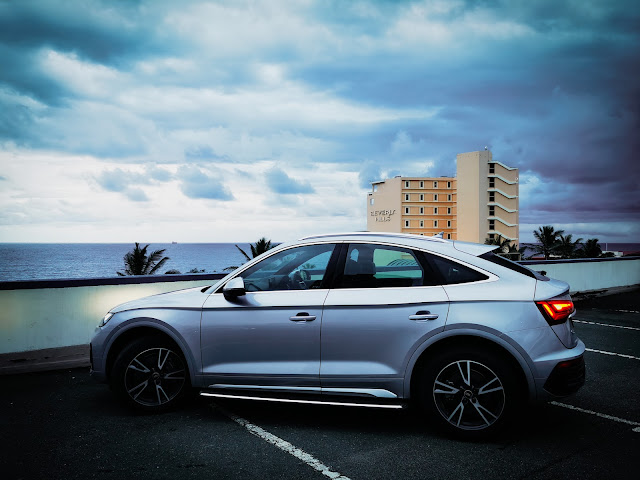 While my verdict on SUV coupes might still be out, Audi is definitely doing all the right things to convince me otherwise. The Q5 Sportback was the perfect balance between practicality and sportiness when it comes to a family SUV. It didn't feel cumbersome to drive and looked great no matter what the setting. The technology that Audi is rolling out in their cars is just going in leaps and bounds, its no wonder they've taken the leap to commit to full electric cars and they see the potential in them going forward but until they become more regular and more affordable, their current line up including this Q5 Sportback is definitely a worthy option if you in the market for a great SUV. 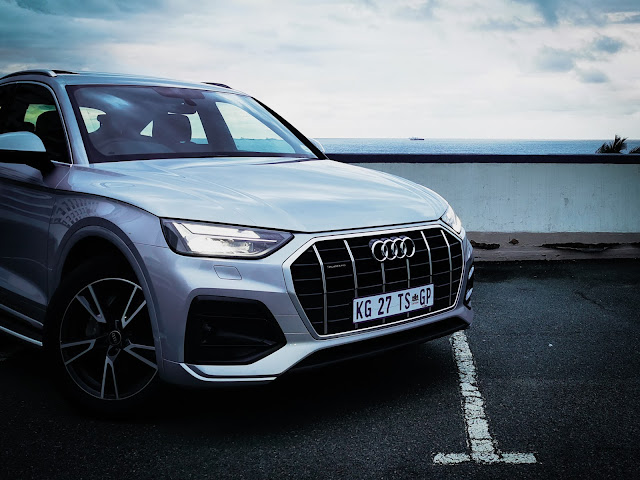