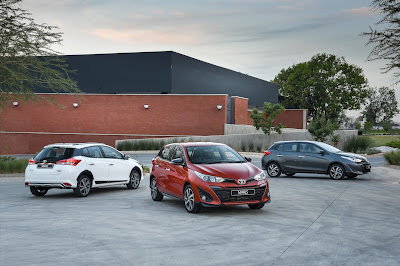 Own it! That's the tag line for the new Toyota Yaris which is being launched this week in my beautiful province, just 20km up the road from my office, so getting there wouldn't have been a problem for me, hashtag just saying Toyota. Okay, enough with me being grumpy for being over looked for the launch because I'll be getting to spend a week with this latest generation small hatch from the Japanese giants. Well I suppose I can't really call it small anymore, since its arrival in 2005, the car stayed relatively the same size with a gradual growth in size as it went a long, if you recall, late last year I had the Yaris Pulse, which is a great car but I did make mention that the finishes and quality of certain interior finishes weren't the greatest. 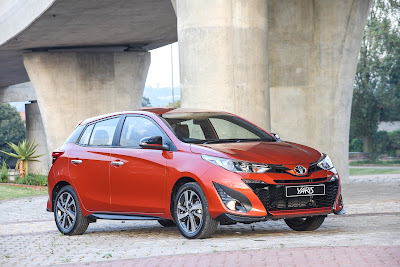 Getting to the all new Yaris, it has grown, a lot, it actually looks like a baby Auris, in fact I won't be surprised if some confuse the two when they see it on the road. When I say its bigger, I mean in 165mm in length and 5mm in width so its much longer than the old one which is very evident from the outside. The design while similar to the Auris has some details that differentiate the two. The lights  are a little longer and has a sweep to the end, their are more details in the front grille which takes some design cues from Lexus. There are some nice aerodynamic design elements which create a flow to the overall design from the front to the back. The c-pillar at the rear is blacked out and with the swooping rear wind shield, gives the car a very sporty look. 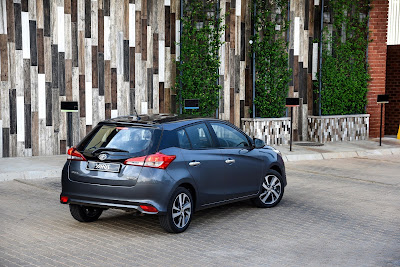 Moving onto the inside, Toyota have totally reconfigured their dash and made everything central again, which I love! From the pictures the interior does look miles better than the old one. Also the large touch screen infotainment system finally has Apple Car-Play and Google Android Auto integration! Hooray! If you don't have those fancy phones, you'll be please to know that the car still has normal Bluetooth for telephone and audio streaming as well as satellite navigation! From the pictures, it seems like they've adopted climate control air conditioning as well but I think those are reserved for the higher end models. 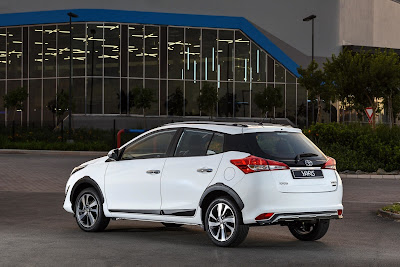 Power wise, all models of the new Yaris will be powered by the 1.5L, four cylinder petrol engine. Which utilizes a dual VVT-i and DOHC 16 valve layout. The engine pushes out 79kW and 140Nm of torque. The car is offered in both manual and automatic, with the manual being 6 speed shift with a top speed of 180km/h with the auto buyers have a choice of either the 5-speed transmission of Toyota's "Multidrive" CVT. The car is front wheel drive  so with the CVT, the car is enabled to react faster to acceleration input. I did find the Pulse to be a bit sluggish but that had a bigger gearbox and an older CVT system so perhaps this has fixed that issue. Will have to wait for the test unit to come in so I can confirm it.