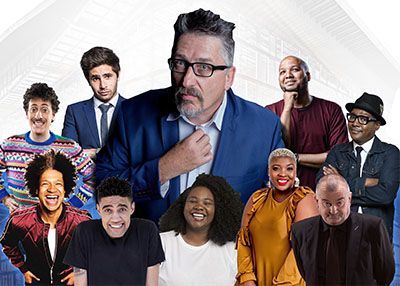 Everyone's favourite comedic sitcom might not be making a come back but with our local comedians around, at least we'll still have something to laugh about. F.R.I.E.N.D.S is the all new live stand up comedy show that's hitting Durban is next. 'The One in Durban' features Darren Maule as your host and joining him on stage is his fellow comedian friends, Celeste Ntuli, Schalk Benzuidenhout, Ndumiso Lindi, Mark Banks, Marc Lottering, Lindy Johnson, Neil Green and Robby Collins.

Taking places on the 11th of October at the Durban ICC, you can enjoy an evening of hysterics with this bunch. Darren, had this to say about the show "Sometimes people forget that I began my career in stand-up comedy. I worked my way up through the comedy ranks, eventually moved onto TV and have spent the better part of the last 8 years on radio. I've been busy, it's no wonder I miss my comedy friends! This show is a win-win for everyone!"

Time and time again, research has proven that not only is laughter the best medicine but that having friends helps us live longer and healthier lives and improves our general happiness and mood. Which is why Darren's picked his personal favourites - some of the best in the business - for this top notch night of entertainment. "One thing I that I love the most about stnad-up comedy is the camaraderie that I haven't experienced elsewhere before. It doesn't matter who you are, when you are backstage about to do a gig, whether you've done as many shows as you can count on one hand or 5000 shows like the greats, it doesn't matter. Everyone has a connection, a real sense of 'we are a unique bunch of people with a very particular skill set; we will find you and when we do, we will make you laugh!'"  -added Darren

Tickets for Darren Maule and Friends start fro R200 and are available from Computicket, the show starts are 8pm and is rated PG-16.

Another hilarious production brought to you by East Coast Radio and Blu Blood.