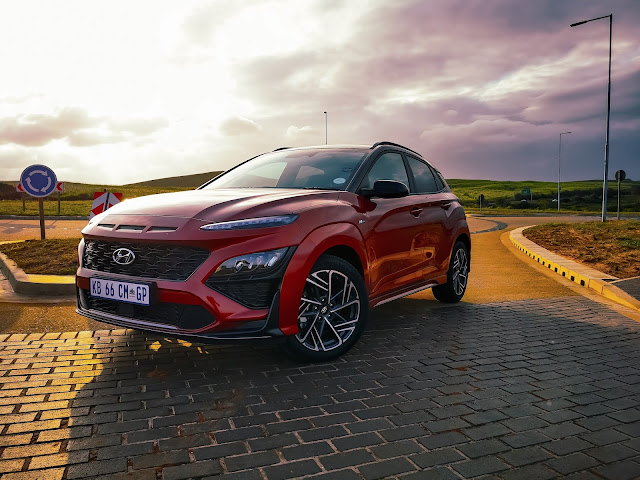 The Hyundai Kona was always a car that left a question mark hovering over my head, from its inception in the market I could never figure out where it fits in. While it was an attractive looking car, boasts a great deal of options that you'd expect from a car in this price bracket I could never put my finger on it and say, that's a great hatchback or great crossover. So one would think after spending some time with the face-lift model in the N Line guise, I would have a better understanding of this car and could nail down where it sits in terms of segments in the motoring world. The answer is no, but in saying that, as you read through my review, you would find that it does have a purpose in the market and will have appeal to certain buyers. 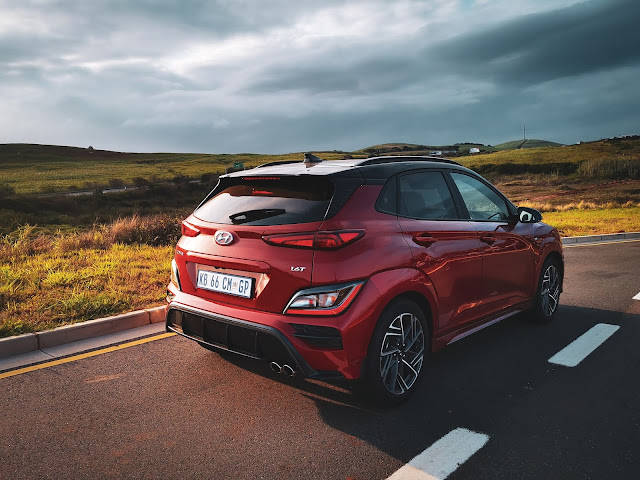 The styling on the Kona is quite different in the sense that it comes across more like a hatchback than SUV, which is where my confusion starts. It has a low stance with quite a bit of bulk which comes from bold wheel arches and a slightly raised ride height. This one being the N Line version has the full on sports treatment with lowered front splitters, a more aggressive grill and rear difusser as well as large multi-spoke rims. There are extra fins and details to add to the N appeal making this look like a proper racer, dare I say it, even a hot hatch.  The styling makes it evident that this model is more aligned to the SUV range of the Hyundai stable with the signature split head lamps featuring the LED daytime running lights on the top with the main headlamps below, this is also mirrored at the back with the tail lights being split. Its a refreshing look to what we're normally used to and adds character as such to the car. 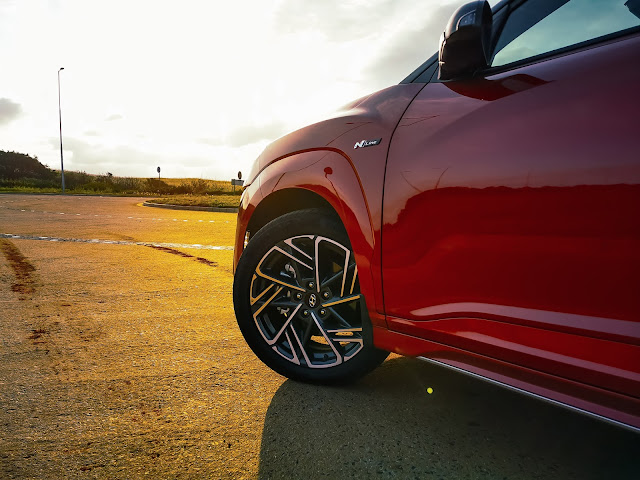 The N Line model has the 1.6T motor, which produces 146kW with 265Nm of torque. That power output is startling to say the least with it being 40kW more than the NA 2.0 engine that is also offered in the Kona range but not with the N Line. The engine was very responsive and coupled with the 7-speed DCT gearbox proved to be a lot of fun to drive. I did find the gearbox to be twitchy on the lower gears, especially changing from first to second at low speeds, it gave the feel of it slipping and made the car jerk which wasn't very pleasant to say the least. This could have been an issue with this particular unit and not a common problem faced by the car, so will report in on that when I have further info on it. Other than that, it was a brilliant driving experience given from the car .The ride quality was quite superb and with the gusty engine just made you feel like you were behind the wheel of a sporty hatch rather than a crossover SUV., I would have liked paddle shifters on the steering to echo that feel and also could have minimized that issue I had with gear changes. 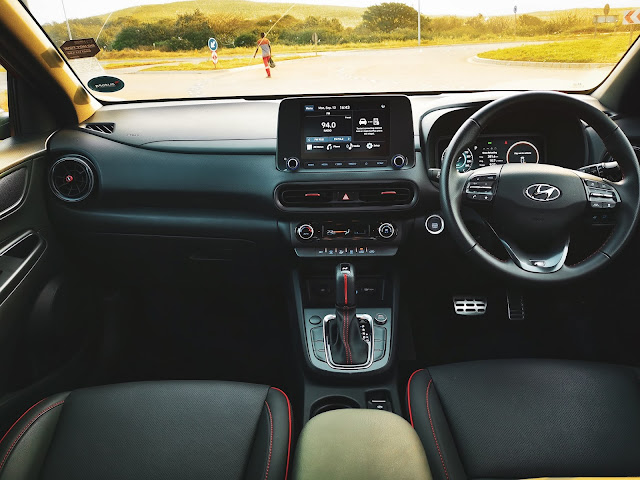 Taking a look at the interior of the Kona N, it would give some of the Europeans some stiff competition not only form the styling but also levels of comfort and choice of materials used in the cabin. It was obviously sporty being kitting out with the N Line package, that including sports seats, red stitching , sports style steering with the N badge prominent on the wheel and gear selector. What intrigued me a lot was the tech loaded in this car, from a full digital dash which had quite amazing graphics and animations when toggled through the driving modes, even the infotainment screen was very intuitive and easy to use. This came preloaded with mobile apps for use of use when driving. The front passenger and driver enjoyed climate control,  the car had two power outlets as well as USB connection for driver and front passenger. The Kona also had hill descent control should you find your self in tricky situations with it. Other note worthy features on the Kona were lane keep assist, active cruise control with collision warning and electric seats for the driver. 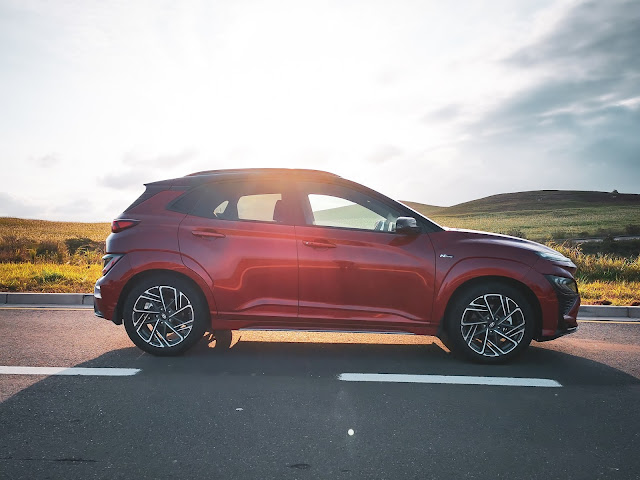 While Hyundai maintain this car is a crossover/ SUV I don't blame people for thinking its more of a hatch more so with the N Line kit on it. It even feels like a hatch when driving but with the added extras that you would find on a crossover, that would be a bonus to anyone. I can probably sit here and nit pick minor details about this car but truth be told the week spent with it was very enjoyable, while there isn't any direct competition for it in the market, well none that I can think of anyway, I feel there is a need for this type of vehicle as you will get those buyers whom aren't really sure if they want to make that transition into the SUV lifestyle but want something thats practical and small. This would be the ideal car for those and like I said, while it might have the off-road capabilities, it doesn't give off that big bulky vibe you'd usually expect from an SUV/ Crossover, so now you understand why I am still confused about its segment rating.