The not so beautiful game

When the idea was first mentioned to me, I thought it was the most absurd thing I've ever heard! TV officials for football? you must be crazy! it will ruin the flow of the game! It will make matches more longer than they're already are, not to mention waste time and take away momentum from the attacking team. Yes having a TV ref for football games doesn't make the least bit of sense but of recent the English Premier League in particular has seen a host of refereeing blunders that are causing massive consequences for teams. 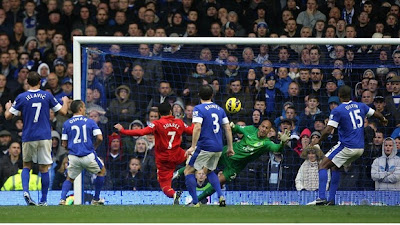 I can dig back to many past games but I'll stick to the ones that are fresh in our minds, that is this weekends events. First up Everton vs Liverpool, the Merseyside Derby never fails to disappoint as each side fights for bragging rights of the city. It is a usually no holds barred match with loads of ferocious tackles flying in left right and center. With such high tentions and fast pace of the game there always is loads of cards being shown with the odd red card being brandished as proven over the years. This weekend was no different but getting back to the matter at hand, with so much happening it is only natural for the officials to miss certain things that we at home have the benefit of television replays to help with, for example Suarez treading on a defenders calf only to be shown a yellow when many of the opposition thought it deserved a red. 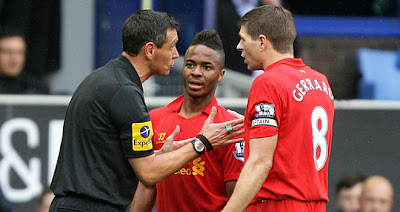 Then theres the case of Evertons second goal, the ball clearly went out off an Everton player and the touchline official awarded Liverpool the throw but the match official over ruled and awarded the throw in to Everton which subsequently led to the goal. Was the ref 100% sure that it was an Everton throw in? why didn't he consult with his official on the side line who felt it was the other way around? Then the big question mark was the disallowed goal. Suarez clearly onside, blasts home in front of the goal what was sure to be Liverpools winning goal. When questioned after the match by captain Steven Gerrard whether Luis was offside, the touch line official replied "I think so".... now I've harped on this before and many also believe that the EPL is the biggest league in the world and has the largest global audience, is there really room for a "I think so decision?". That decision cost Liverpool 2 valuable points and it was away from home. 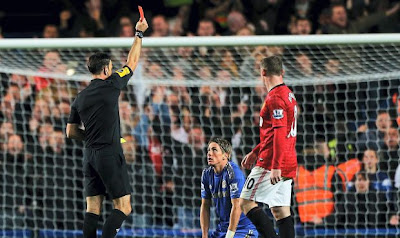 Moving onto the next game, a table topping clash between Chelsea and Manchester United. 2-0 up and comfortably in the lead, Chelsea then score 2 goals to put themselves back on level terms. They then had their right back Ivanovic sent off for fouling Ashley Young, minimal contact at that but contact none the less and he was sent off as he offended Young's right at goal. Little later on, Evans catches Torres on his way to goal, albeit it he wasn't past the last defender but was caught,  he did go to ground but the ref seemed to have though that he dived. Torres was then brandished his second yellow and sent off, thus causing Chelsea to play the remainder of the match with 9 men. Inevitably, United did mange to score a winner from Hernandez, but again video replays show he was clearly coming from an offside position to slot home the winner. None of the officials spot this, end result was United get all 3 points and Chelsea are left with 2 men facing bans.

Now, if the game did have the technology to review or refer these decisions the outcomes in both matches could have been very different. Yes just like how we have in cricket and rugby, video referrals do tend to take a while but 9 out of 10 times the correct decision is made. Football being a fast pace game, one would think there is no place for such a thing in it. Yes, I still agree that we should just take some of these bad decisions on the chin as its part and parcel of the game as they do tend to swing in favour of every team, one more than the rest *cough* Man Utd *cough* but of recent bad decisions are becoming a bit too common. The only solution other than introducing technology is for the ref's to get a proper beat down to up their game, just like footballers they are professionals at what they do and they have to be the best to be in this league. If I cant do my job properly, I will be replaced and they need to realize that they're aren't there to make "I think so" decisions, it has to be a conclusive one. I can go on about the topic but I think I'll give a rest for now. Lets hope this weekend sees a much better performance by the officials.
Posted by Amith at 9:18 PM