January 30th will see the global launch of the Blackberry 10 series smart phones. Much has been said about this device over the past year and how it would compare to its major rivals as many of the current Blackberry devices hardly hold a flame to whats out there in the market. I've owned a Blackberry for the past 2 years now, the 9700 Bold to be exact, honestly I think its one of the best phones made. The size, shape, design and capabilities of it is brilliant. Downside to the phone is obviously the battery life but ask any Blackberry user and they would tell you the same thing, another major downfall is the memory, not the SD card but the cache, the phone gets remarkably slow if accessing many applications, then the dreaded clock pops up not allowing you to do anything until it processes what needs to be done.

Blackberry's holding company RIM (Research In Motion) took a major hit in the markets last year especially in Europe and the USA. The advantage Blackberry had with its BIS service almost became null and void since data prices were dropped dramatically, allowing users to purchase other smart phones. Blackberry still did well in regions that still have high data prices, South Africa included but seeing that that was no longer a major draw card, something had to change.

With the 10 series it seems that this change has come and in a big way! No longer will having BBM be a stand out feature of the phone  and I'm hoping they've at least fixed up the processing speed problem, the last thing people would want is a slow phone, especially with Samsung, Apple and Nokia all entering the market with super fast processors and operating systems. 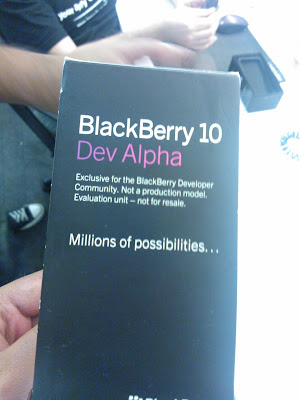 I had the opportunity to look at the Blackberry Z10 Alpha version, the size was similar to the iPhone5 and the OS was the one they used on the Playbook. The developer that was using it said the phone was pretty good but battery life was an issue, there has been a Beta release which differed a bit from the Alpha seeing an increase in size, so maybe a bigger battery?


There are two phones in the 10 series being launched, the Z10 which is the flagship. A full touch screen phone with all the bells and whistles to compete with the iPhone and Samsung Galaxy's and the X10 which is a half and half, well more like 3/5th's and 2/5th's. The X10 is similar to the 9900 where it has both touch screen and a keypad facility. I like that they still keeping that trend as some people prefer using the keypad to type instead of the touchscreen.

There are many videos online with reviews on the phone itself and so far it looks rather promising, many seem to think this will be Blackberry's "last hurrah" but if it can capture the market like it did before, how can it be the end? I have spoken to many Apple and Andriod enthusiasts, they all had good things to say about the phone but obviously in an indirect way, so generally speaking we have quite the phone on the way. I've been holding out on renewing my contract purely because I want to get this phone. Not to say I am a Blackberry fan boy, for a person that averages a gig a month on data, BIS comes really handy, especially with data prices in our country! Roll on January 30th and hopefully early release dates for the phone.