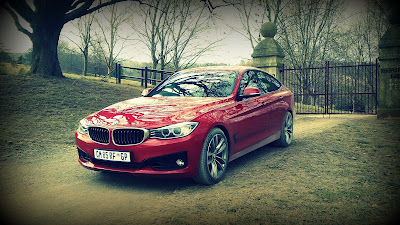 When BMW released the 5 Series Gran Turismo back in 2009, many didn't know what to make of it. It was big, bulky, odd looking and  reminiscent of something that came out of Chris Bangle's mad laboratory. Because of this, it wasn't very popular with majority of the public and to this day one doesn't see many on the road. It is why I had reserved judgement when I heard BMW were releasing a 3 Series variant of the GT. When first images appeared of the car, it actually didn't look all that bad and when more pictures and information given during the international launch in Italy, it was clear BMW had something special on their hand. 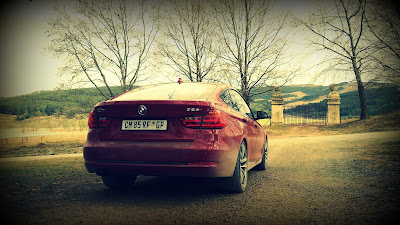 I spent this past week driving around in the BMW 328i GT, a nice big bright red one. Okay at first I wasn't a fan of the colour but it grew on me and besides, it wasn't the colour I was interested in. The car came with the Sport Line package, which included 19" rims, a lowered and more stiff suspension, larger intake grills and sporty interior. I would have preferred the M Sport Kit which looks like a beast but I was quite content with this one. As usual the car was packed with extras that would make any grown man act like a 5 year old at Christmas, Heads up display, park assist, surround view, park distance control, 16 speaker Harman Kardon sound system, Lane change warning, Lane departure warning.... I'm getting tired listing all. 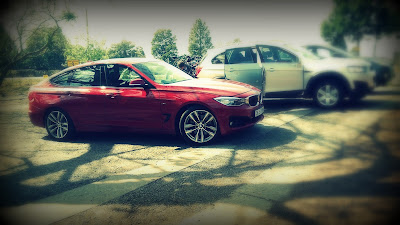 When you read about the extras in the brochure, it doesn't really appeal to you unless you know how helpful it is. Even a simple thing like the comfort access system which provides keyless entry and my favourite, a boot sensor that is located under the back bumper which requires you to put you foot under the car which triggers the boot to open. Perfect when your hands are full with your groceries or your golf clubs. Oh and the boot closes itself, which is not a bad thing to have seeing that it is quite a huge door with big glass windscreen which you don't want slamming hard. 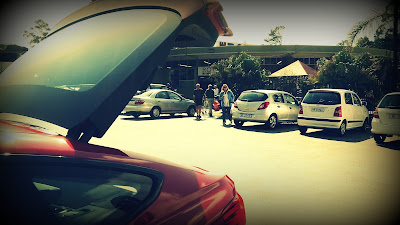 Bluetooth connectivity was another handy extra with easy streaming of music as well as a very responsive voice command menu to access phone entries. I did however have problems trying to tell the navigation where I'd like to go, perhaps its the names of the roads and places we have here in our beautiful country that confused it. Dual climate control and seat warmers were once considered a luxury but with the freak weather we've been experiencing of late, one could almost say they are a must! Thankfully the GT comes with both of these. 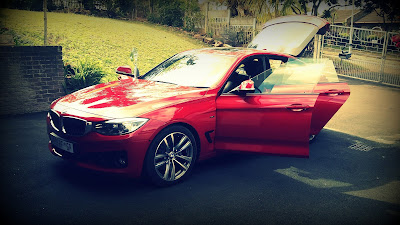 Enough about the extras, onto the car! It is blatantly obvious that the GT is bigger than your standard 3 series, this is evident by the amount of space you have in the cabin of the car. I stand at a height of 1.85m and prefer to have my seat set quite far back to stretch my legs when driving, with the driver seat in this position I am still able to sit comfortably at the back. It is why I thought the perfect thing to do would be to go on a road trip with my family. For a family of 5 people to be seated comfortably in the car is quite impressive, seeing that many only get this sort of comfort from a larger and more expensive sedan. 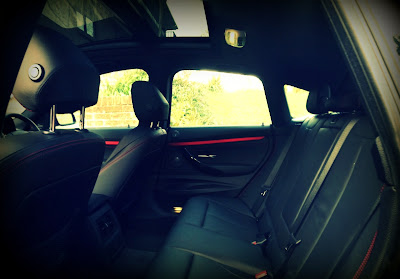 My mum on the other hand was equally impressed with the boot, knowing that she could go wild shopping with 520 litres of space at her disposal with and if there were no passengers seated at the back the seats could be dropped to increase that figure to 1600 litres! The sleek design of the car is very appealing and makes it look like a grown up version of the 3 series, everything is blended well and nothing sticks out like a sore thumb. Plus with the coupe like shape and frameless doors, it does tend to car the eye of many. 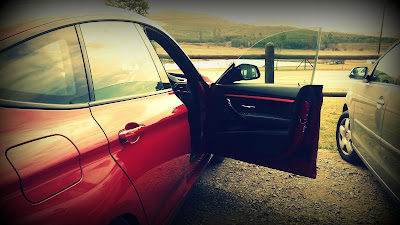 The 2 litre twin scroll turbo charged, engine pushes out 180kW, 350Nm of torque and 245bhp which was more than adequate to carry the massive chassis it was supported in. At times acceleration did feel slugging but this was mainly due to the large 8 speed automatic gear box trying to find the right gear to give you real time feedback, there was the option to use the paddle shift feature but again with 8 gears it just seemed a bit much. 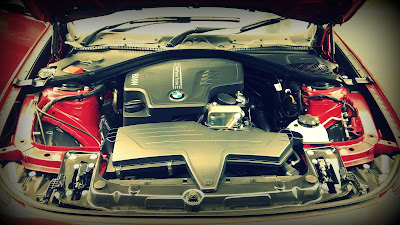 BMW claim the top speed to be 250kph which I wouldn't say is impossible as reaching high speeds on the highway was effortless, it handle itself around corners like a hot knife going through butter, which was also due to the rear wing that deploys at high speeds to give the car more stability and looks pretty cool when it activates.The active power steering along with the standard 50/50 weight distribution added to the great driving experience that one becomes accustomed to with BMW. The engine does have a lovely grunt when power is summoned as well, its like music to your ears if you're a petrol head. 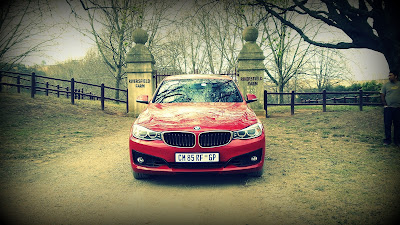 After being very sceptical at the beginning with this car, having spent time with has changed my mind. Overall it is the most practical of the 3 series range, space being a major deciding factor on my vote and overall attention to detail, it offers everything the 3 series has and more. The designers in Munich really went all out to perfect this one and although it isn't the most appealing or best looking car out there that would get you much street cred but it sure is damn nice to have! 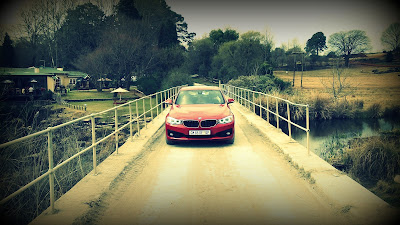 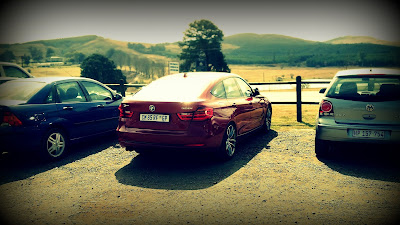 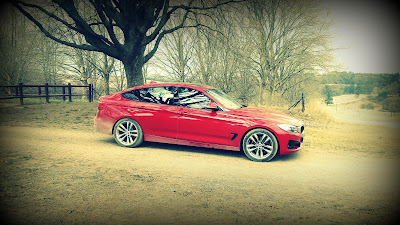 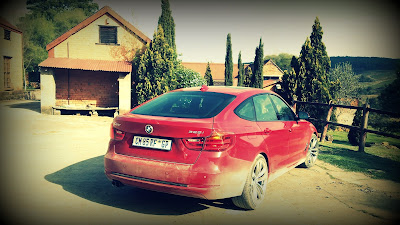 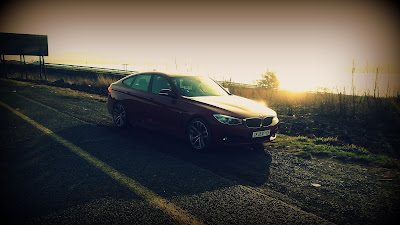 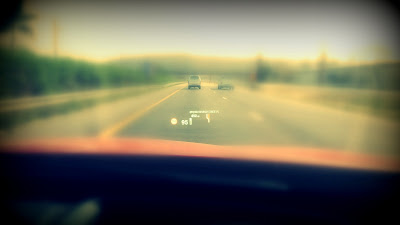 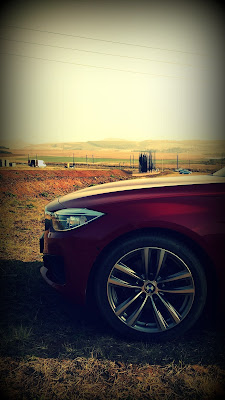 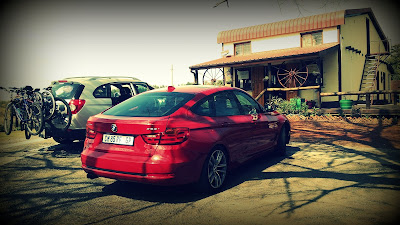 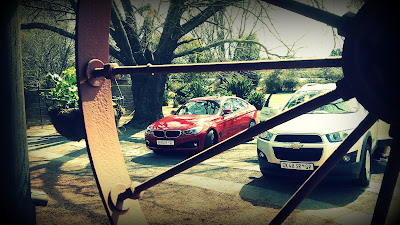 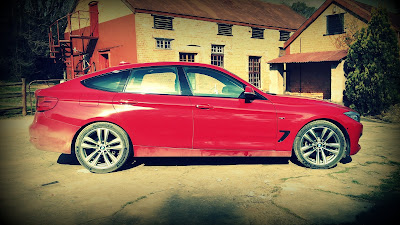 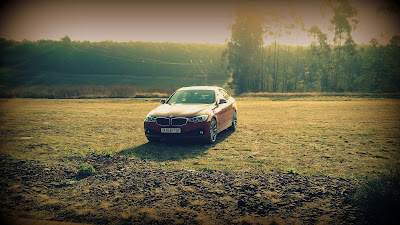