We're kicking off a brand new segment on the Bucket today, "Bucket Scene" is basically reviews on the coolest, freshest places in Durban. The idea was given to me by a late friend and I've finally decided to go ahead with it. What you can look forward to is me bringing you the low down on places to visit in Durban, seeing that the Summer holidays are upon us and with that brings many a visitor to the East Coast, I might as well get the word out on unique establishments that are in and around the city for them to try instead of visiting the same old places they always do. 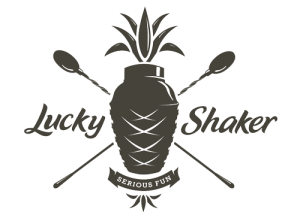 Today we're showcasing something new and unique to Durban, as you don't often find places like this in a hurry, its the Lucky Shaker. Situated in Shop 9A, Mayfair on the lake across the road from Chris Saunders Park in Umhlanga, it's a one of a kind cocktail bar/ lounge. At first I thought the location was strange seeing that it was situated away from the hustle and bustle of the rest of Umhlanga but after sitting down with owner Michael Stephenson and listening to what he envisioned for the place, it made a lot of sense. He wants his clientele to come in and basically lose sense of reality while they mesmerise you with their outstanding cocktails and food, which also is why he doesn't have any TV's in the place.

The set up is great with a sit down area as well as a bar where you can sit and watch Mike and his staff spell bind you in their mixing techniques, which on its own is great entertainment! After taking our spots at the bar we were told of the special s, all of which are written on a chalkboard on the wall and issued with our complimentary high fives as that formed part of the specials.  Apart from cocktails,  they serve a variety of craft beer as well as craft on tap, to which my accompanying mates were very happy with as they love the craft.

The place came highly recommended by a friend of mine and with that he told me I had to try the "Port and Stout" cocktail.  He swears it's the best cocktail he's ever had and with him being an expert on the subject, I had to try it. As Mike began whizzing it up, it was interesting to note that instead of using stout out of the can,  they actually make a reduction of it using Guinness. That added with some port and other liqueurs, shaken up with some ice strained into a martini glass made quite an experience to watch.  Now I'm not the biggest beer fan around but I do enjoy a milk stout or Guinness every now and then so I was looking forward to tasting this.  Light, with a lot of flavours but at the same time quite strong, so it's not something you would down but rather enjoy sipping. One thing that stood out the most for me was that they used only the freshest ingredients for their menu, from fruits that go into their juices to the veggies and meat that went into their food, speaking of which...

The food menu isn't that big with them sticking to just two types of mains if you may call them that,  being burgers and tacos and some bar snacks are bites but as with most of the things in this bar, it's not your typical burger or taco. All burgers are gourmet and made on premises with them using 3 different cuts of beef to get the ideal mince mix, if you don't eat beef you can always substitute it for a chicken fillet. I have asked Mike to experiment with a lamb burger which he said he wouldn't mind trying and I wouldn't mind testing!  The one I went for was the burger special of the week being a bacon avocado and feta burger. It's the best 3 topics you can get on a burger but if one of them is off it can make or break it. All 3 were superb, creamy feta, crispy bacon and the freshest avo I've ever had in the burger, the chicken fillet didn't even have to be there I would still have enjoyed it! Served on a toasted bun with a choice of salad or fries on the side with a home made tomato sauce it hit the spot.

For dessert I was tempted to try one of the creamy blended liqueur milkshakes,  one could opt for the Dom Pedro or Marshmallow Fizz but I sampled some of the Grasshopper which is a blend of chocolate and peppermint liqueur with milk and vanilla ice cream. The smell alone will get your senses racing.

There's honestly nothing that's on the menu that I wouldn't mind trying so if you're down in Umhlanga and looking to shake things up a bit, why not give these guys a try. You won't regret it!

Website: www.luckyshaker.com
Instagram: luckyshaker / luckshakermenu
Facebook: Lucky Shaker
Address: Shop 9A, Mayfair on the lake
5 Park Lane, Parkside
Umhlanga Newtown Centre
Parking available on the road or in the building.
Posted by Amith at 12:17 AM