Comedy for a Cause 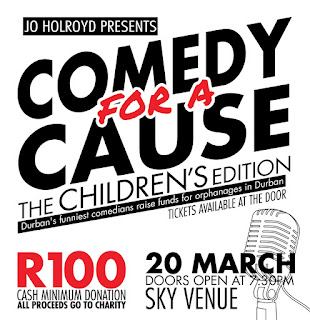 The Edith Benson Children's Home in Sherwood, home to at least 60 children of various ages was recently gutted in a fire. Since then, the community at large have shown grate generosity in donating clothes, food and other necessities that were required for the care of the kids. Although there were many donations, it still isn't enough and more funds are needed to repair the home. With this in mind, Comedy for a Cause came about, Jo Holroyd went about and appealed to almost every single comedian in Durban to come together and assist with the relief of the Edith Benson Children's Home by partaking in this one night only comedy showcase.

The lineup is like a box of chocolates as Durban's biggest, smallest, and brand new comedians share the stage for a hysterical night of comedy in order to raise funds for a cause that is no laughing matter. The show which will take place next Tuesday at the Sky Venue which is based on the top floor of the Southern Sun Elangeni Maharani will include likes of East Coast Radio producer Rory Petzer, award winning Zulu comedienne Nono R, East Coast Radio's Neil Green, Leah Jasmine who self professed herself as Durban's "Queen of Woke Comedy", dark comic and culture expert Bob Perfect as well as newcomers like Akheel Maharaj, Troy Tesla, Sbu Myanda, Musa Zondi and Venessa Morton as well as a host of up and coming established comics. The lineup is colourful, and their topics will be too, so it's best to leave kids at home for this one as a no under 18s are allowed.