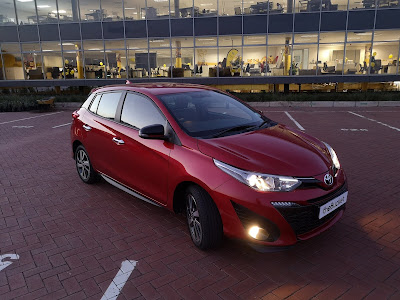 The Toyota Yaris has come a long way since it was first introduced in the market, and to this day you still find many of that first generation models on the road, proving Toyota's reliability is not just something people speak of but really is true. Much like most of their cars, the Yaris is built rock solid and for many was the perfect budget hatchback to suit most commuters. Over the years though the Yaris had to evolve to provide some competition to the others in its segment and as a result, the budget hatch soon lost the "budget" tag and now moving slowly to a premium type of vehicle but one things for sure, Toyota are not compromising on the quality of vehicle it's giving its customers and after driving the latest version of the Yaris, it really is a big step up from the one of old. 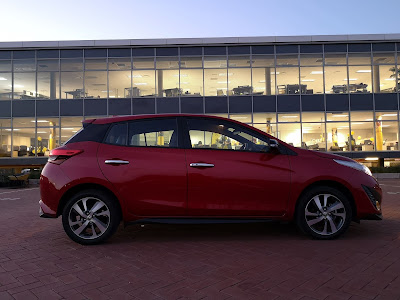 The new Yaris brings in Toyota's new design language which will see a change in most of the line up with the newer generation models coming in. The car does look significantly larger than its predecessor, and has a lot of lines to it which make it look more sportier and gives the entire car a nice flow. The new long sweeping head lamps which extend to the side of the car but start from the front where it's met by a split grille winged onto a triangular nose which flows down from the bonnet and has the Toyota emblem displayed. I had the Yaris S model, which the S stands for "Sport" hence it was fitted with a sport kit, with extra front lip, side skirts and rear spoiler. It did make the car look more aggressive than the normal model. The large honeycomb air intake in front has two LED light clusters on either side, just below the headlamps and has two fog lamps. The side profile of the Yaris has changed as well with a larger frame and the design of the windows merge into a blacked out pillar which slants into the rear windscreen. The curvature of the glass molds the shape of the rear lights, like the front is long and sweeps around to the side. Overall, the design is still subjective to me, while I've met many people who like it, for me it still seems a bit odd. 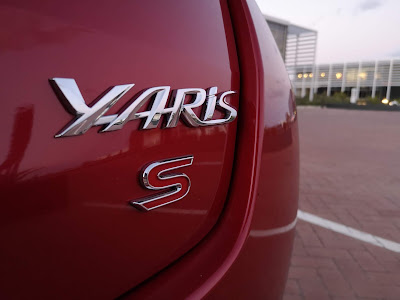 All Yaris models come with the same 1.5 litre engine, even thought the model I had was the Sport, no performance upgrades were done to the engine. It's an inline 4 cylinder motor which churns out at reasonable 79kW and 140Nm of torque. When it comes to cars like the Yaris which would be used as a daily run around and moved up a segment to a small family mobile, the most important figure you're going to be looking at is the fuel economy and while it has a 1.5 litre engine, oddly the Yaris came in a 5 speed manual gearbox. Now while I don't really have an issue with a 5 speed box, you can tell when the car needs that extra gear and the Yaris definitely does. I'm pretty sure it would help dropping the economy rate which isn't bad but good be better. Other than that, the Yaris engine does perform really well both on the highway and suburban driving. 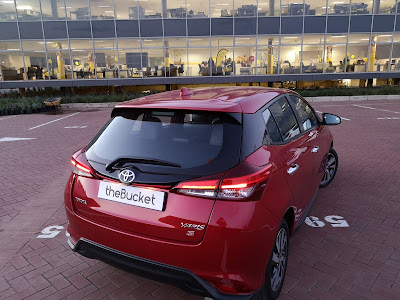 The new Yaris is much bigger than the old one and it really is spacious. The leather seats which come standard in the Sport model almost look like racing seats but are super comfy. The textures and trimmings are really of great quality as well. You could get 5 adults in there with a small squeeze but nothing that would be too uncomfortable. The ride quality in the new Yaris is really great, and even on the various gradients of surfaces I really couldn't fault it. Handling on the car is also quite superb, even though the car is bigger it's very easy to maneuver around, it's tight turn circle helps in this regard. 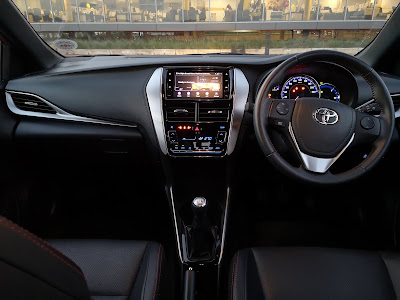 We've seen Toyota introduce the large touchscreen multimedia players in their previous generation models but it was lacking a lot but the new decks they seem to be coming with have a wide array of features. Apart from the basic radio/ Bluetooth connectivity, it has USB and HDMI ports, satellite navigation, Apple Car Play and Android Auto connectivity, as well as mirror share! The system can also pair with WiFi and use apps such as YouTube and weather! While many aren't that technology inclined as yet since most of these features are relatively new, Toyota also include easy step by step videos which are built in to the deck, to show you how to connect and make use of these features. Something that's pretty cool and the first from a manufacturer that I know of. 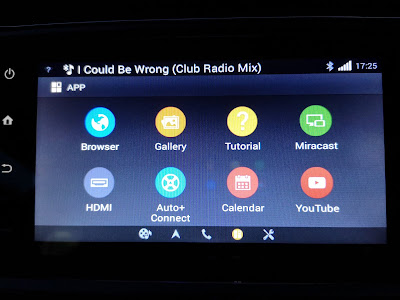 Overall the Yaris still remains a fun to drive small hatch, while it has grown in size, it seems to have matured along the way and really is a car for anybody. While I did mentioned the price has gone up, if you have to compare it to other cars in it's segment, it is still bang for buck worth the money. It offers more, it's reliable and you can't beat that Toyota heritage. It's the perfect in-betweener from the Etios and the new Auris which is due in the country soon. The Yaris has really been given a premium feel, and if you look at the details like the stitching and how well laid out the cabin is, you realise how much Toyota have upped their game. I'm really liking what I'm seeing from them so far and it's only going to get better. 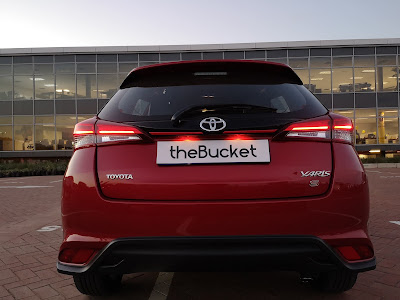