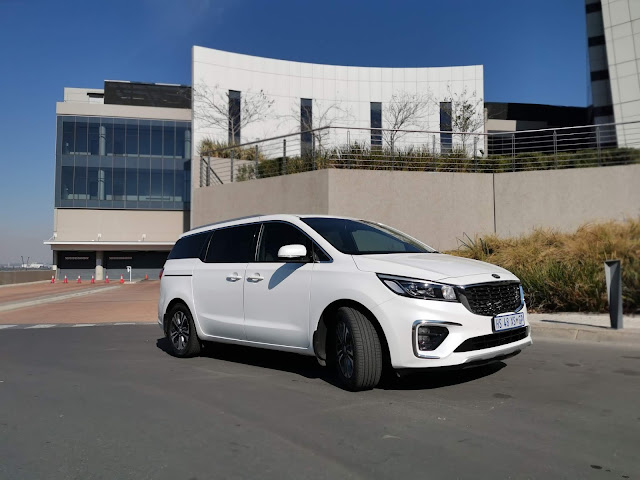 So about a month ago I was up in Johannesburg for the long weekend, trips to Joburg with my family isn't easy, whether we're going by car or plane my mother will make sure we use every single allocated space or weight possible to take stuff with. Don't ask me what she carries, well given that I'm Indian its mainly food stuff, for my siblings or her sisters up north. You'd think there was a serious shortage of food if you see how my mom packs, anyway back to the car. Instead of hiring a car, the kind folk at KIA Motors South Africa offered me their Grand Sedona SXL to use during my time in the big smoke. Seeing that it was a weekend spent with family, this would be the ideal car to have and boy did it work a treat! Being six of us in total, we all could travel in comfort in one car, going to where we needed to go and not worry about having double the drivers, double the cars and double the trouble. 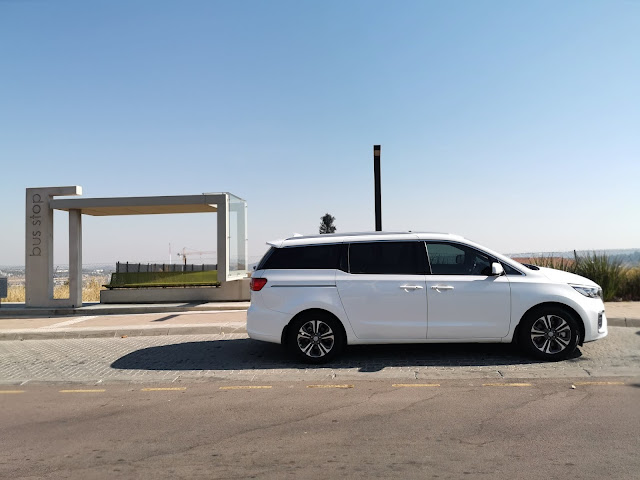 The Grand Sedona would be categorized in the MPV segment, taking on the likes of the Chrysler Voyager, VW Caravelle and Mercedes-Benz V-Class. All of which have evolved over the years to become more than just a mini-van, this category has been upped in luxury and design with all of them looking sleek and appealing to the masses. KIA have done a great job on the styling of the Grand Sedona. The front is similar to that of their 7 seater SUV, the Sorento but with more lower stance and wider front, this makes the front head lamps more elongated. There's a nice mixture of LED and Xenon lights in the lights along with a quad LED fog lamp system below. The grille is big and pronounced which is a key feature to the front design but look at the Sedona head on, you wouldn't think it was a combi. The side profile follows the slick lines from the front and straightens across the body with a nice taper up on the windows at the rear which ties in well with the rear window. The rear of the Grand Sedona is equally as attractive as the front, albeit a bit conservative, there isn't much you can do with the rear design on a vehicle like this. Again rear lights very similar to that on the Sorento with a full LED system. 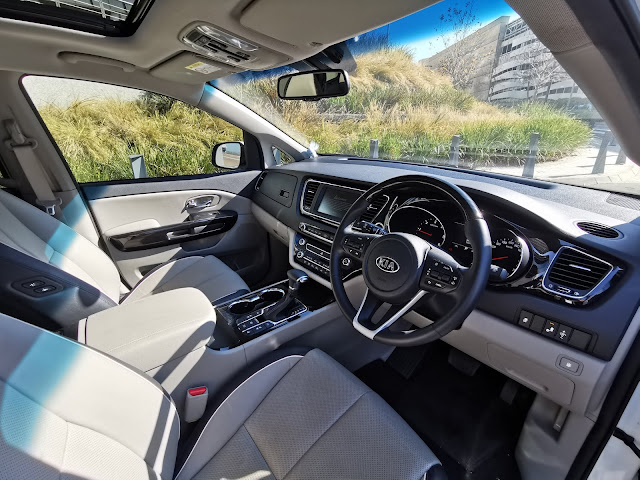 I could go on about comfort in this car, I think the best way to describe the Grand Sedona is your vary on private jet but on the road. Being the range topping SXL model, it came kitted with all the bells and whistles, for the driver, the cockpit is well designed for easy access to pretty much everything. You really do feel like you're in a plane cockpit with buttons to control virtually everything in the car. From the dual sunroof's to the dual automated sliding doors (yes, I'll get back to that now). Both driver and front passenger get big comfy seats with heated and cooling functions as well as both being electronically controlled. The dash is finished in great quality materials with touches of chrome and brushed aluminium to give it that bespoke finish. Everything just seems bigger in this car which I personally like. Moving to the middle row, to access the back of the Grand Sedona, KIA have added sliding doors on both sides of the car, which both are automated and can be opened and closed by using the handles provide, buttons on the car key or from the driver cockpit which is brilliant as it made things so much more easier when loading and unloading the family. 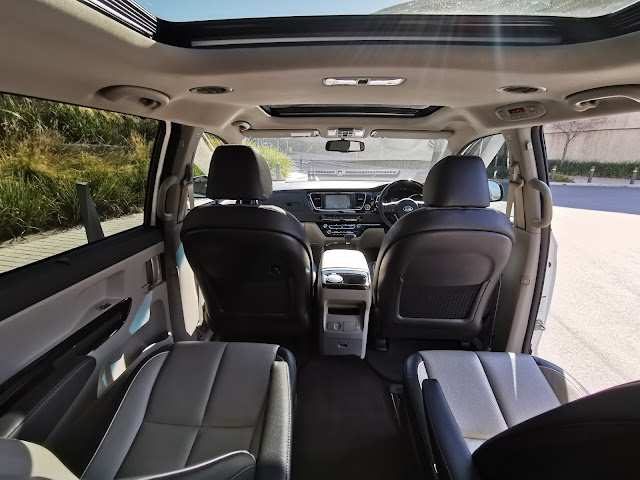 The middle row had two individual seats, both with arm rests and their own climate control system, these seats also can move front and back, there is also charging points for both passengers. In the back we have a solid bench which is comfortable enough for two adults, three at a slight squeeze, there are cup holders for two passengers as well as USB charging points on either ends. The quality of leather is up there with many German luxury sedans and the two tone scheme looks brilliant. As mentioned there is a dual sunroof system for the car with the rear passengers getting the option of having natural light and fresh air in the back. The tail gate is also automated and can also be opened via the key, driver cockpit and manually pushing the button. If you think your luggage capacity is going to be restricted by the third row seats, think again, because of the depth, you can stack a number of suitcases in there, even can fit four golf bags standing upright! That's without folding down the seats, which you can and make the space even bigger! 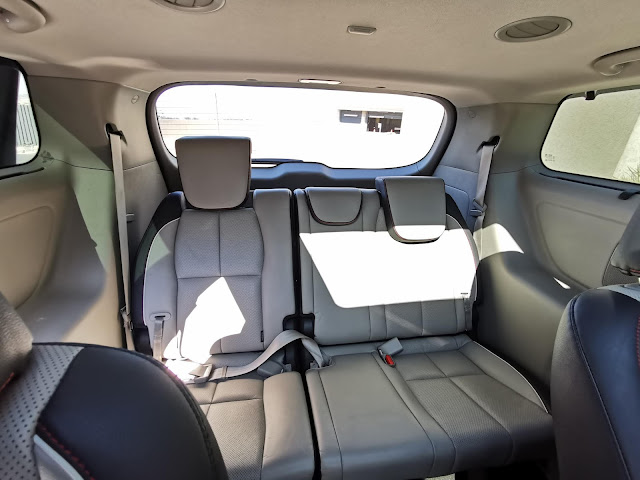 The previous generation KIA Grand Sedona had a 3.0L V6 petrol engine, KIA swapped that out for a much more economical 2.2L turbo-diesel engine which delivers 147kW with a torque factor of 440Nm. The engine features KIA's fourth generation fuel injection system which improves responsiveness, fuel economy and performance. The pedal is very responsive and it surprisingly builds up speed rather quickly. With an 80-litre fuel tank, the Grand Sedona ensures that this is a people traveler, suited for large families and long road trips. With a claimed economy of  8.0L/100km and a range of close to 900km, 1000km if you're doing long distances, this car is a no brainer if you're the type of person that likes going on road long road trips with large groups. Also driving this car is effortless, many would see the size and be daunted at the possibility of driving it around and parking it, but trust me, it was nothing of the sort. 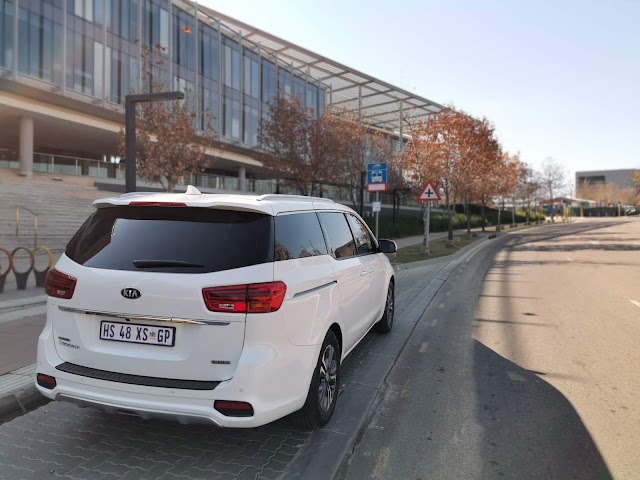 Overall, this KIA Grand Sedona SXL was the perfect vehicle for our needs, it fitted all six of us in comfort, had every luxury item you could think of, including a steering wheel heater for the Joburg winter! It's the ideal car for another number drivers, and a nice alternative to the usual SUV options and in some cases could be cheaper and more worthwhile option to pursue. KIA really have done a great job on this one and really is hard to fault. 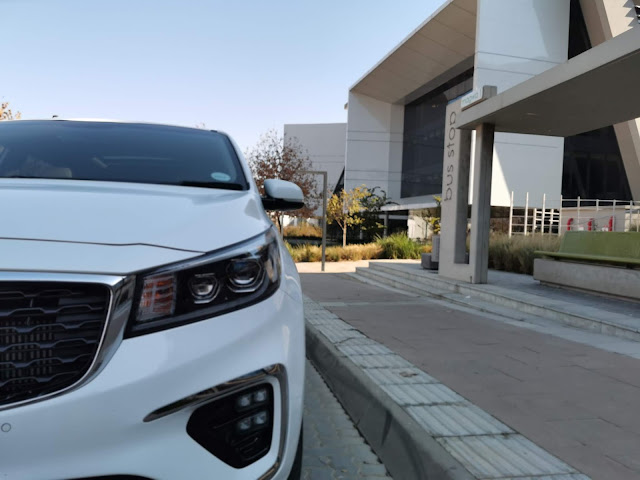