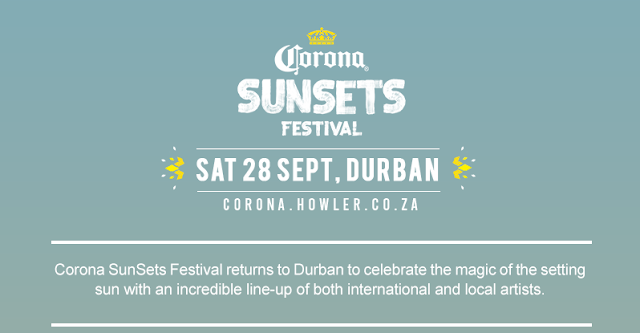 Corona SunSets Festival returns for the second year in a row to the Shongweni Polo Club on the 28th of September this year. With early bird tickets selling out, a limited number of Phase 1 tickets have gone on sale, and with the artist line-up being announced last week, you can bet those Phase 1 tickets won't last very long!

Among the line-up include headliners Felix Jaehn of Germany, who's popular blend of tropical sounds and house music proved to be crowd pleasers all over the globe, most noted for his hit track "Ain't noboday". Joining him is Belgium deep house DJ, The Magician who will have you mesmerized with this future house beats and nu-disco style. Making up the rest is a list of local greats, whom include Micasa, Floyd Lavine, Tresor, Timo ODV, Sun-El, Holly Rey, Crazy White Boy, Benny Maverick, Strange Loving and more! It's bound to be another spectacular show that you do not want to miss. Tickets are available now from Howler.