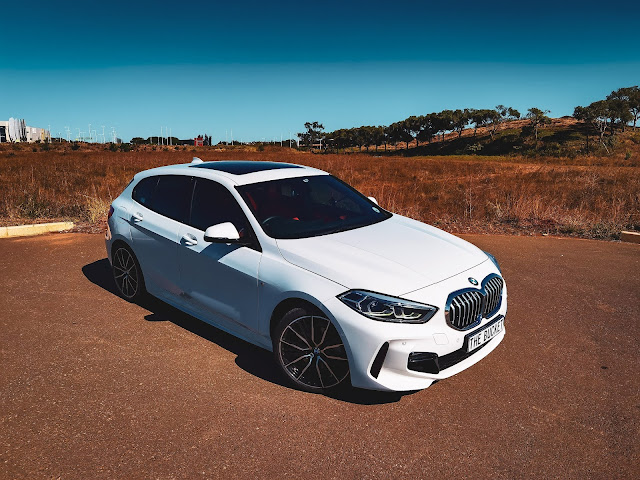 So couple weeks ago I got to spend some time with BMW's all-new 1 Series, when it was first launched I didn't like the look of the car. It seemed like a reconfigured X2. The sharp nose, large grille and the slanted front headlights did nothing to woo my enthusiasm over the new design. The press pictures did little to flatter me, nor did any of the M Performance parts which you could decorate the car with did any convincing. As always I tend to reserve judgement until I see it in the metal, so when the 118i in the M Sports guise came rolling in, it took me just a couple of seconds to respect what BMW did with the design of the car. Yes, I know how can you change your mind so quickly? Well, to use an old cliche,  you have to see it to believe it is all I can add. With COVID-19 still having a firm grip on the country, time with the 118i was less than normal with a test car so I had to make the most of it. With it having the smallest engine in the line-up, it was obvious that the motor was made for economy on mind, so the only real thing for me to test was performance, could this baby still give an enthralling drive like we're so used to with all BMW's? Well read on and find out. 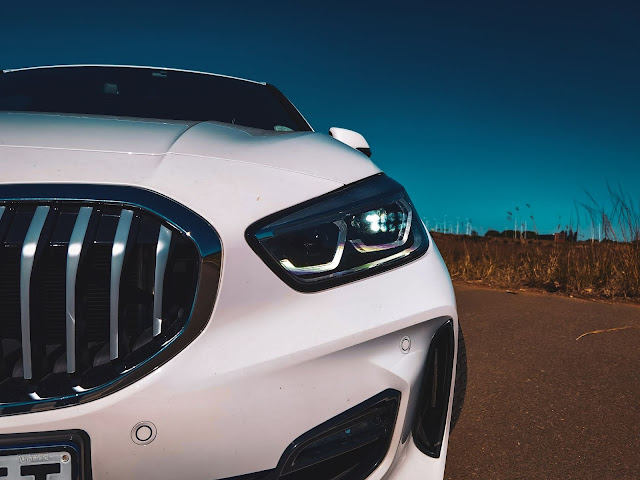 Like I said in the intro, in pictures the 1 Series isn't the easiest on the eye but in the metal, once you take a closer look at the detail in the design, the folds, the curves, the angles as well as the materials, you'll realise very quickly that there is a lot to like and appreciate about the new 1 Series. This being fitted with the M Sport kit has all the necessary bulk to make it look as good as a genuine M model. From the front, the aggressiveness is apparent with it's wide diffuser and the sculptured edges to push the airflow into the intakes either side which cool the wheels and brakes. The side profile maintains this sporty look and while the kit has no prominence apart from the bottom sill it does give a nice blend to the body. The rear of the car has that wide stance and blacked diffuser which is finished in high gloss plastic, this really is great which even for the bottom entry models to have this sort of materials in the finishes gives the car a premium look. The air vents on the back are sadly fake but not a major issue as it's more there for looks than any functionality. Stepping inside the 1 Series, most of it is very similar to the new generation BMW look, with the new M Sport steering wheel and instrument cluster, which is slightly smaller than the other models. 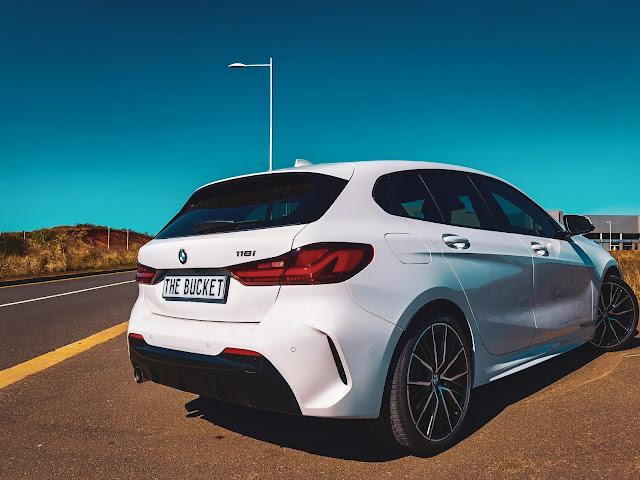 The 118i has BMW's smallest engine in their line-up, it's powered by the 1.5L TwinPower Turbo, an engine you can find in the Mini Cooper, not very exciting right? But believe it or not its also the same combustion engine in the BMW i8 so it has some cred to it. Given that the 1 Series is bigger and heavier than the Mini, this engine does seem a lot more pluck in the 118i, delivering 103kW and 220Nm of torque is rather impressive from a 3 cylinder motor while achieving a 0-100kph time of just 8.5 seconds. The car itself feels pretty solid on the road and picks up speed well, coasting is a charm in this car, one slight gripe I may have with it is with it being front wheel drive, the car does tend to jump on take off, so keep those hands firm on the wheel. The 1 Series comes with BMWs standard cruise control, it is pretty simple to use and set but does have the auto braking feature. The car is very nimble and easy to navigate through tight spots, so parking in a congested parking garage is enough for everyone. Parking not your thing? You can just opt for parking assist option which will do the tough work for you. 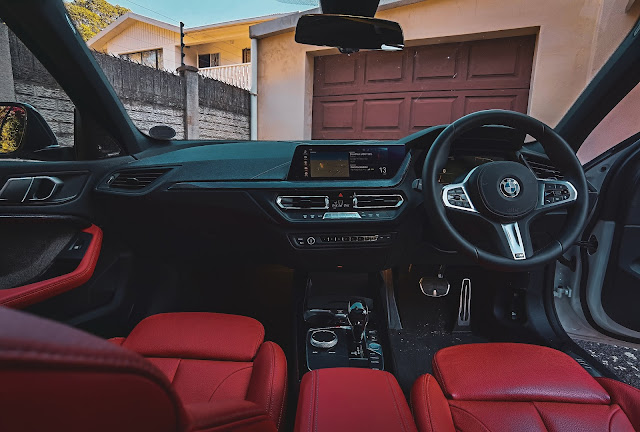 While the 1 Series is the baby in the line-up, it is a decent size when compared to the hatchbacks, the cabin is spacious and very roomy, the seats are lower than usual but gives you a nice view of the cockpit from the drivers perspective. As mentioned its pretty much what you would expect in a new BMW with a similar set up, albeit a bit scaled down. The car has dual zone climate control for the driver and the passenger as well as a single zone system for the passengers at the back. The red leather "Dakota" interior really was a great contrast to the Alpine white exterior and the choice for colours and materials from BMW is quite vast for you to chose from, while you could have a similar spec to someone else, there are details in which you can change, from the stitching to the types of textures you want on the dash and doors. The 1 Series has its ambient lighting built-in to the dash where as the likes of the 3 Series have it underside the beading. Boot space is decent, it can fit my golf clubs so that is all that matters to me! 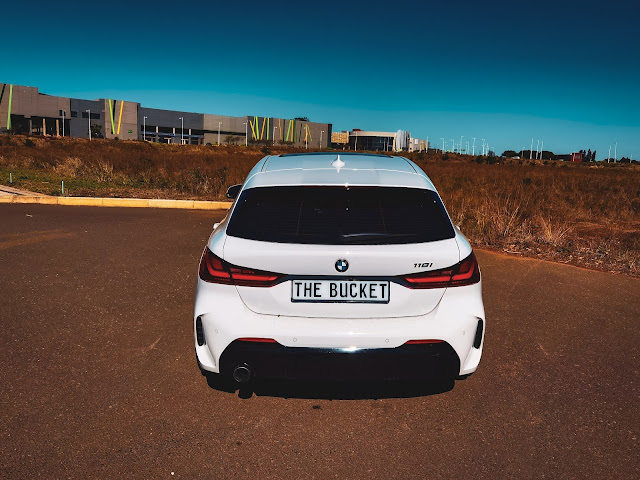 Overall, I was left pretty impressed with the 118i, look I know it's the smallest engine in the BMW stable so for me seeing if it was economical wasn't on the top of my agenda, seeing if it could still deliver the performance we know and love from the German manufacturer was and it delivered with a charm. While my foot was pretty heavy with it, the fuel usage wasn't too bad if I have to say so myself. Base price on this model is a tough one to swallow but if you look at what you getting and there is zero compromise on luxury, I say its worth it given that that the competitors use inferior materials and line up similarly in costs so the value is there. 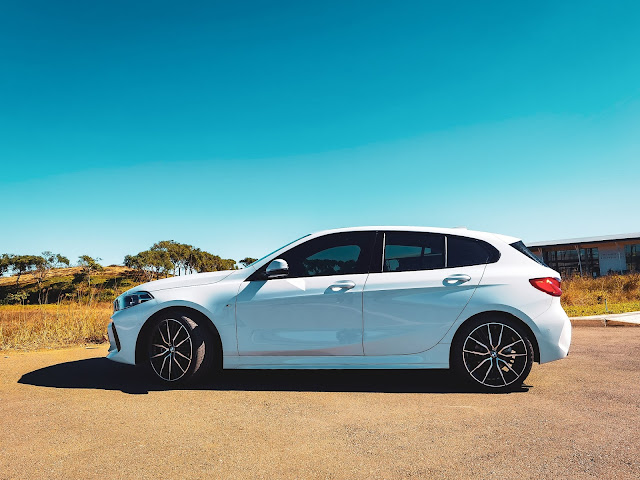