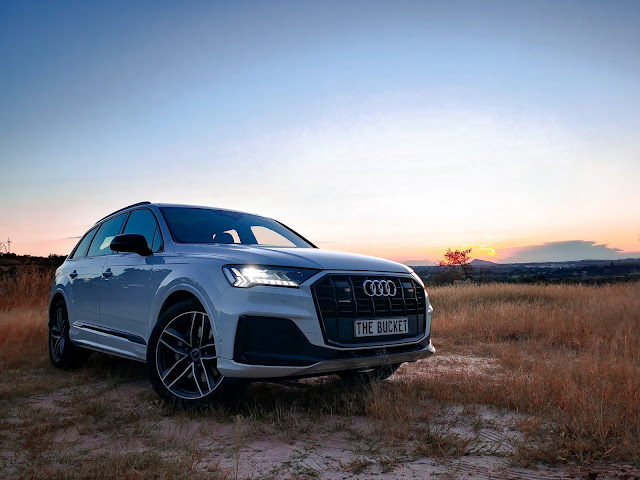 When it comes to large premium family SUV's, there are quite a few to options available on the market but in terms of practicality, and pricing there tends to be tight competition especially when it comes to the 7-seater variety. One of the "OG's" in the segment is Audi's Q7 and they have a new one which I got to sample not too long ago. It came in the perfect time as I planned a long distance weekend away with family and if you know Indian families, this was going to be the ultimate test for a vehicle like this. While I've seen many Q7s on the road, from the first generation to the current. this was the first time I would be driving one, to say I was looking forward to getting behind the wheel of it is an understatement. The first thing that captivates you is the size of it, you know its big but Audi have done so well with the design that not until you're standing right next to one do you realise the sheer size of this thing. Anyway, lets dive into the review. 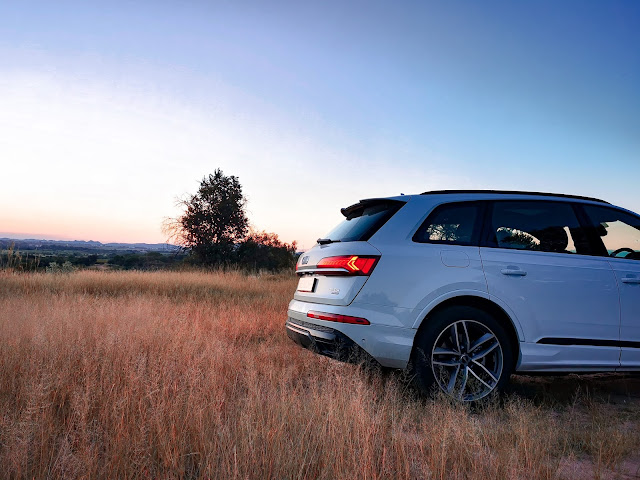 As mentioned above, Audi's design is one that actually masks the size of the car while most of the other manufactures highlight it in theirs. Personally I think this is a good thing on Audi's part as while the car does look smaller it isn't small at all, there's tons of space as I will digress on later. As always with Audi's revised models, the design changes aren't drastic but noticeable. Keeping in with the latest design language, the cars standout feature in the new headlamps which feature Audi's LED matrix light system which have the welcome and goodbye sequence which you can stand and watch all day long. The focal point being the large grille has all design element evolve from this point to all around the car. The large air intakes either side of the grille enhance the cars sporty kit, of which this model was in the S Line guise. So with this there is added elements of black coming through strong in the design with trimmings along the side and on the front and rear bumpers. The rear lights also have been redesigned and feature a sold chrome bar that runs horizontally along the back. The dual exhaust pipes have openings on either side of the rear difusser. With the S Line kit, the car comes kitted with a rear spoiler which follows the roof line and mimics the shape. The S Line package also comes with large 21" multispoke alloy wheels which even make a subtle colour like white look sporty. 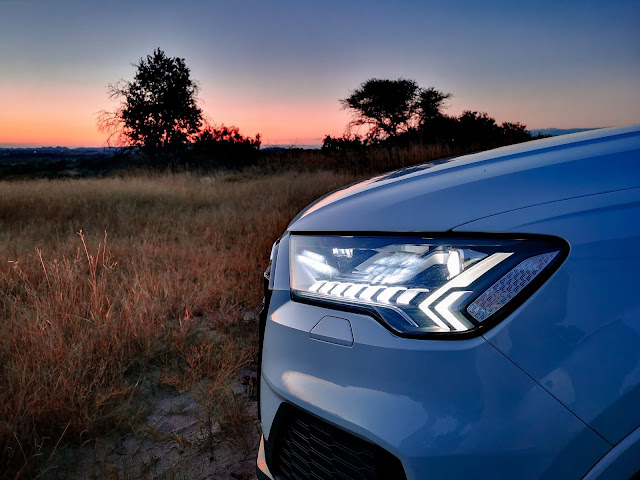 Powered by a 3.0-litre V6 diesel engine, the Q7 is no slouch even when carrying a full load. The motor produces 183kW with a max torque figure of 600Nm so there's plenty of propulsion power when needed. This is all fused to the 8-speed tiptronic gearbox which is effortless in search for the right gear to give you the optimal power required. The Quattro system works like a dream too by it delivery power to each wheel, no matter the terrain. Even with a full load and four passengers, I managed to get a decent average of 9.1-litres per 100km on my trip. This is with long distance drive from Durban to Joburg as well as mixed driving in urban surroundings. The Q7 performed sublimely on the open road, making use of the active cruise control on the longer distances, this is where the fuel saving came into effect as the car will judge on its own when to coast and when to brake or speed up. Given that there was a lot road works which meant the cruise control was working overtime with the lanes closing down to one at many occasions, it still did it without a fuss but this did play a big roll in the consumption aspect of it. While this is a big car, its performance figures are still reasonable with a 0-100km/h time of 6.9 seconds and a top speed of 225km/h. 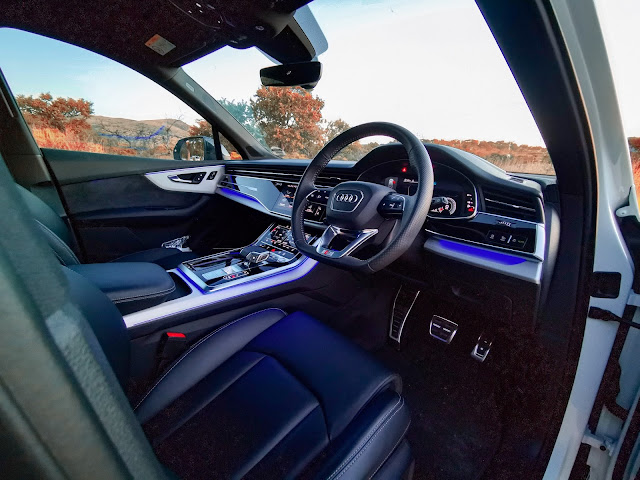 Where do I begin? The cabin is basically a carbon copy of the Q8 with the new MMI interface and dash layout but everything just feels a lot more roomy. This particular model came with the S Line interior which had the honeycomb styed stitched leather seats with the S Logo in the headrests. Piano black finish on the dash with that uber cool ambient lighting that just get better when the sun sets. The seats are super comfy with the front passenger and driver getting seat heating, dual climate control which is controlled by the touch screen below the infotainment screen. The instrument cluster featured Audi's virtual cockpit which should be a ticked option in my books for any of the new Audi models, I will always maintain that if you have the virtual cockpit there is no need for the heads-up display but in any case, this model had that too. The second row had sporty style seats as well but not bucket type which meant you can get 3 adults to sit comfortably in the back. They also get dual climate control aircons in the back along with twin USB ports to charge phones. There is an option for a third row of seats which are electronically controlled from the interior or the boot. We never made use of these but I did test them out, which it is a bit tricky getting in, when seated its not terrible for short distances but perfect for kids. 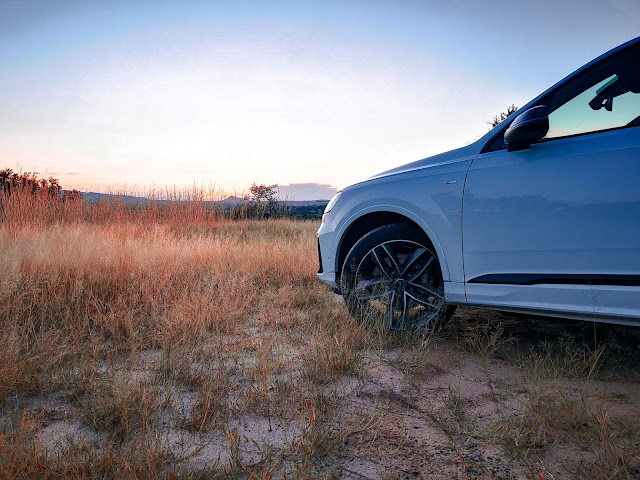 The Q7 is packed with tech, as mentioned it features Audi's latest MMI user interface, while the model still doesn't have Audi Connect, I think it will be introduced soon. The active cruise control was a winner for me, you can set the distance of the braking and there after reduce it which came essential in cases where the lanes were reduced to one. You don't want to have it set to too close especially when doing high speeds as the car will brake in time but your passengers wont appreciate it. The Q7 also came with a 19-speaker Bose sound system which included a large subwoofer in the boot floor.  With the size of the Q7 being rather big, it came with auto-park assist which means it parks itself. I tested this out in the busy street of Florida Rd in Durban and it worked like a charm, not only finding a spot quickly but also getting itself in perfectly without making the traffic agitated for waiting too long. I guess people thought I was a natural at this but all along it was the car that did it for me. The car also has an automatic tailgate which is standard with models like this, it also came with an automatic tow hitch which folds in when not in use. The MMI interface has Android Auto and Car Play built in to make an easy plug and play setup. There is only USB C inputs for the driver to make sure you have the right cable. Wireless charging mat is also in the hand rest compartment. 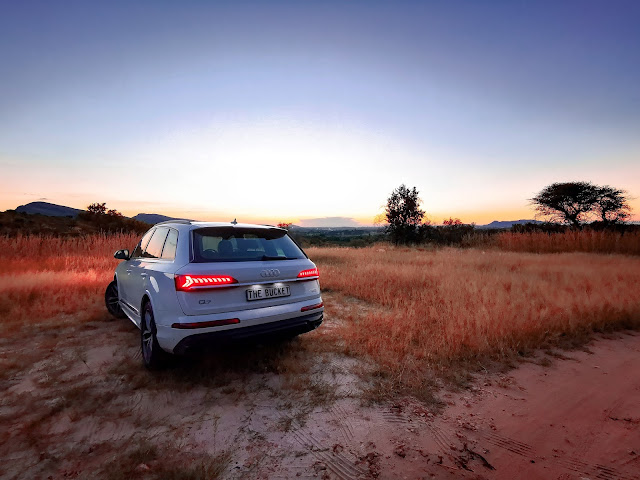 Overall, the Q7 over delivered on my expectations, to say I was spoilt when driving up was an understatement. While road works did put a spanner in the works to my consumption figures, at least I got to sit in comfort along the entire duration. With the luggage capacity being in excess of 2000 litres, you best believe my mom was happy with this, even after I loaded my golf bag in the back! While this is the only engine offered in the Q7 model, with the SQ7 being the next alternative, I think this is perfect for what it delivers. Definitely a perfect family SUV that offers premium benefits for the price you're paying. 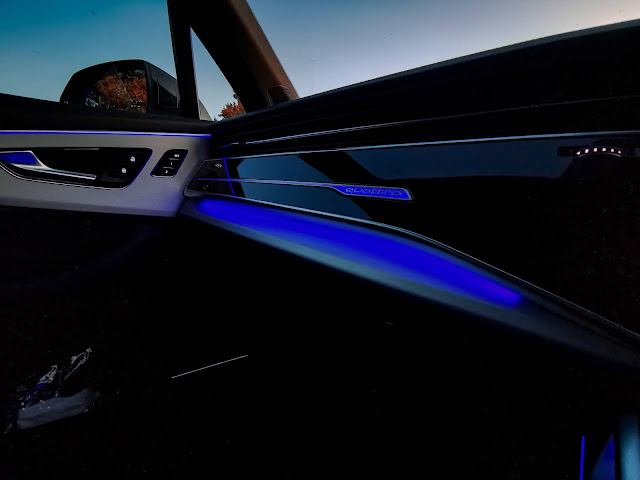