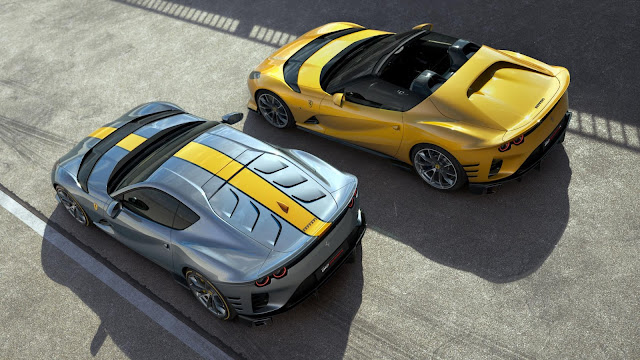 6.5-litre naturally aspirated V12, the most powerful ever made by Ferrari, that alone should send shivers down your spine as a motoring purist. It is the heart of the beast behind the new twin flame models launched today by the Maranello based motor manufacturer, dubbed the 812 Competizione and Competizione A which I'm guessing stands for Aperta seeing that its missing a roof. Revving to 9,500rpm, so a high revving engine of note and I can only sit back and wonder how ungodly it must sound, it probably will awaken the underworld with its growl on start up. 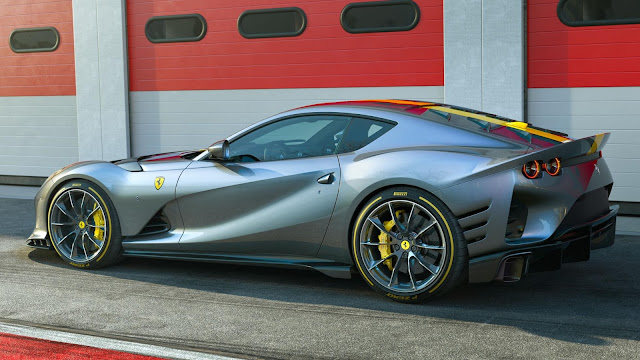 Seeing that this is a spawn of the 812 Superfast, which lived up to its name being Superfast, one can only imagine the raw power that is waiting to be unearth in this machine. Ferrari has redesigned the pistons, fitted titanium con-rods that are 40 percent lighter), layered a diamond like carbon coating on the piston pins and rebalanced the crank which is a whopping three percent lighter than before. There are new cylinder heads, F1-tech for the cams which are also coated in that diamond like carbon and redesigned the intake system across the the manifold and plenim as well as variable geometry inlet tracts. All of this translates to a motor that produces 819bhp, a 0-100km/h time of just 2.85 seconds and a top speed of over 340km/h. The car looks phenomenal, with Ferrari going all out on a superb aero kit that not only is functional in maximizing downforce and generating speed but looks the part too. It is almost like a samurai suit that is fitted over the standard 812 guise, my favourite part being the rear engine cover with the gills of sort to allow for engine cooling. The Aperta version is a lot less intimidating, if I could use that analogy but it would probably be the more terrifying and enjoyable one to be in. Bit strange that Ferrari opted to launch both the coupe and drop top model at the same time as they normally do stagger their releases, unless they will run some double special for selected customers. No word on pricing or number of units to be produced but you can bet its going to be ultra limited like most of their special models.