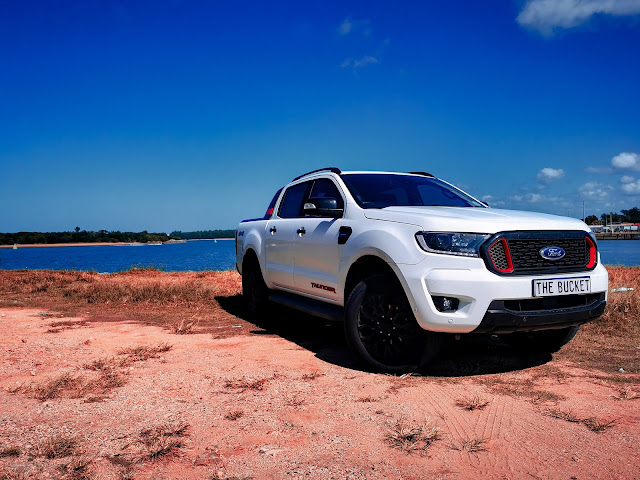 Ford's Ranger has really been a breath of fresh air to the market which was largely dominated by Toyota's Hilux. The sales speak for themselves and the Ranger proved to be more than just "healthy competition" to the Hilux as in most months it outsold it! One of the key differentiators for Ford was the variety offered in the Ranger line-up and also making their double cabs more passenger friendly, which persuaded many who would look to an SUV, now looking at getting a bakkie instead. While at first glance, it would not seem like the most practical passenger vehicle around but I tell you what, after spending a week with it, it makes a good fighting case as you will soon learn. The new Ranger Thunder is currently a special edition Ranger and the range topping variant the Wildtrak is still available but for me, Ford have really thought out of the box to enhance the appeal for this bakkie over that of the Wildtrak. 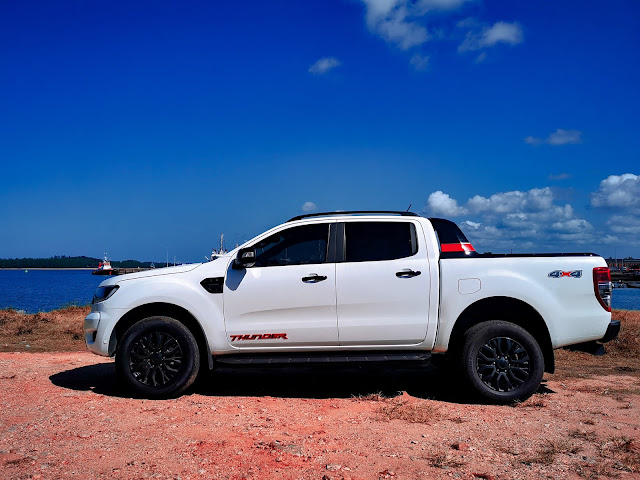 While the overall design of the Ranger remains the same, the Thunder has some great design tweaks to really make it stand out from the crowd. Ford say they made it as bold as a lightening strike in a storm and they're not wrong, with anew black mesh grille, unique multi-spoke 18" black rims and red racing detailing with accent coming through in the grille and signage on the side of the van. Other stand out design enhancements are the powder coated black roof rails, the awesome designed race sports bar with red detailing, black molded side-steps which are both functional and give the bakkie are more wider stance and lastly the 3D Thunder signage on the side and the back with red inlays. I was a bit disappointed to get a white Thunder as the launch colour is black, from the press images you can see why the Black looks so much more intimidating but when you're next to the bakkie, any colour will do it justice, that's the lengths that Ford has gone with these little elements that make this look so great. Even on the interior, the full ebony style interior has breaks with high-gloss plastics and red stitching, having that racing inspired look come through. 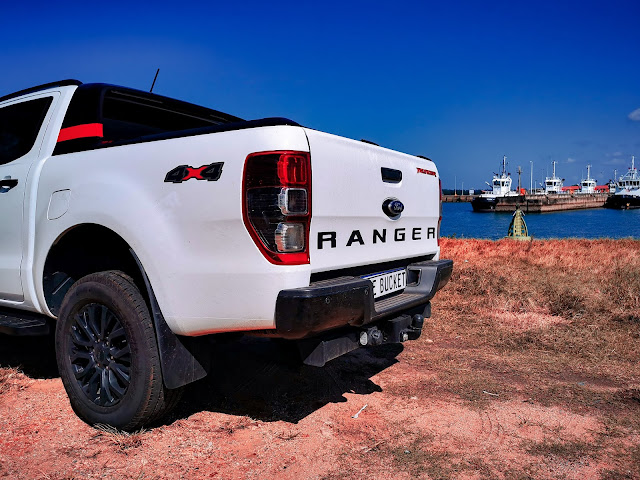 Offered in two engines, the old 3.2L TDCi or the new 2.0L Bi-Turbo engine in both 4x2 and 4x4 models, the Thunder can be customised to what you want. The model I had featured the new 2.0L Bi-Turbo engine which I prefer, its paired with a 10-Speed automatic gearbox which assist the engine in leaps and bounds, both on the road and off-road. Performance figures are actually more than the 3.2L, as this particular engine churns out 157kW and 500Nm of torque, that is 10kW more than the old Wildtrak engine. The car feels solid on the road and unlike the older 6-speed automatic gearbox, it doesn't find itself hunting for gears when faced with an obstacle. The Thunder just breezes through any situation and with the extra 4 gears, this helps a lot to lower the consumption. The four-wheel drive system also assists in this aspect on the road as well, transferring equal power to all four-wheels, easing to carry the load of this monster. 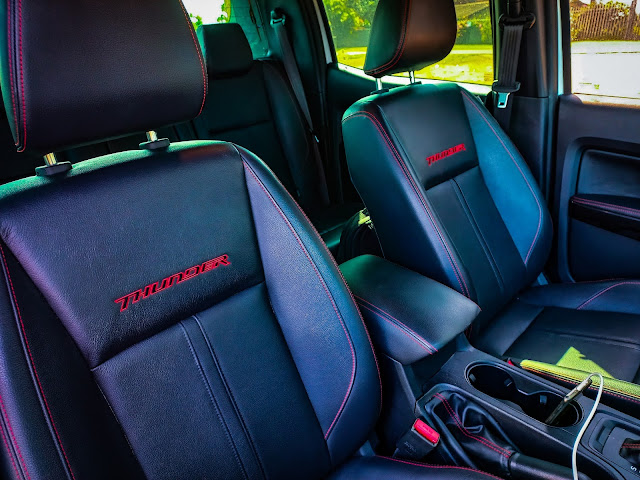 Now, coming back to using a double cab bakkie as a passenger vehicle, is the Thunder a practical option? Well, the answer, as much as it bugs me a lot because I'm not the greatest fans of bakkies is yes. Ford have really ensured that all creature comforts that you would find in a normal passenger car was fitted into the Ranger Thunder. It features all-new leather seats for both front and rear passengers, it comes with red stitching to make it look bolder. The driver and front passenger get to enjoy heated seats as well as dual-zone climate control. The Ranger Thunder is equipped with an 8" TFT touch screen with Ford Sync 3 preloaded. This has Bluetooth connectivity as well as mobile applications such as Android Auto and Car Play. There is plenty of USB ports available in the front for charging or for phone connectivity. The driver instrument cluster also features two 4x2 TFT screens which alternate vehicle information as well as entertainment and navigation info, all controlled by the multi-control steering wheel which is also covered in that neat new leather and has the red stitching. On the road, the ride is pretty comfortable on the Ranger Thunder, even with the big wheels and rims, its a smooth and quiet journey while you're in the cabin. 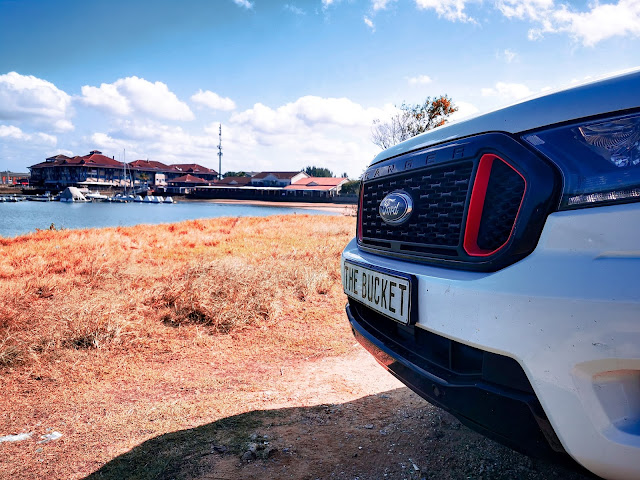 Overall I've been impressed with the Ranger Thunder, while it may look like a bakkie, it has so much going for it that makes you feel comfortable no matter what environment you're in. The loading bay is nice and spacious and has a bed divider in the loading box so you can separate your cargo and to ensure it doesn't get affected by the elements, it has a sealed roller shutter door which is lockable. The Ranger Thunder is a stylish yet practical bakkie, one which definitely has people turning heads and while there is many after market kits you can buy and add on to your Ranger now, I recommend keeping this one stock standard if you getting one. I mean it already looks so damn great, why would you want to go spoil all the hard work the men and woman at Ford have gone through to make yours looking like a freak of nature? You can't see me right now but I'm eating my humble pie, yes I am finally admitting you can use a bakkie as a passenger mode of transport but not just any bakkie, it has to be a Ranger Thunder!