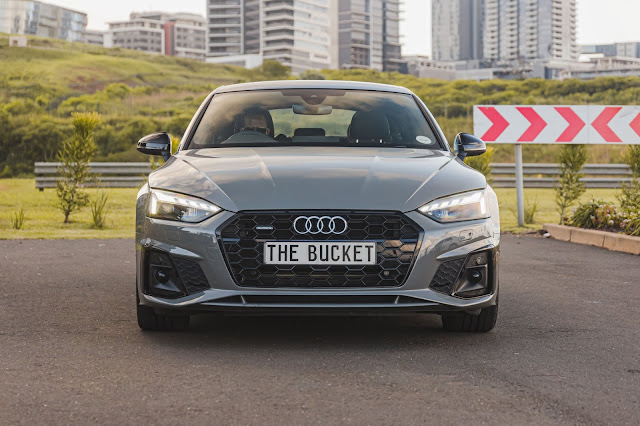 There's not many cars that get me smitten, while I am a sucker for good looks, lots of tech and decent power, it takes something a little more special that has me wanted to hold off from handing the keys back after the specified test period. While I describe testing cars to many as having "no strings attached flings" on an ongoing basis, there are certain cars that make you sit and think about giving up this lifestyle and settling down with them but alas, my efforts fell on deaf ears and the press fleet agent managed to grabbed the keys out of my hand to take it back where it would be washed and prepped for its next fling. You already know which car I'm talking about because its in the heading and some of you might be thinking, hang on, this isn't even the top of the range model? Yes its not but the Audi A5 Sportback TDI is the perfect balance for me as you will soon find out it my love letter, I mean review to it below. Each of us are different and so is our taste in cars, apart from the obvious such as brand, model, engine, its the little things that the cars have or do that clutch to our hearts that makes us know, that's the one for me. 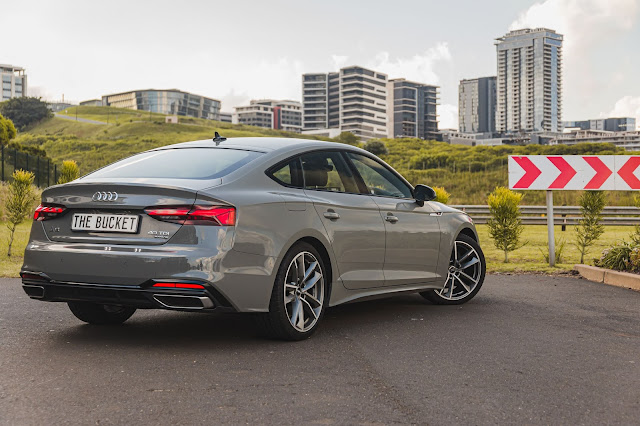 There's nothing different in-terms of overall body change in design as this is a face-lift model but the sleek silhouette of the Audi A5 Sportback has lines that will have you memorized, this particular model came fitted out in the S-Line kit and covered in that gorgeous Nardo Grey paintwork, which in my opinion is the best colour that Audi has in its colour palette. The sporty S-Line kit means the cars front bumper has  high-gloss black accents around the grille and side intake vents, while these vents do have the honeycomb style meshwork, they are sealed and have sensors where we would normally see fog lamps. With the introduction of the Matrix LED system and the daytime running lights which are easily seen in thick misty conditions, we're seeing the need for additional fog lamps redundant and in my opinion makes the car look much better. The lines that travel from the front all the way following the curves of the wheel arches and body work tie up beautifully in the rear with the huge automated tail gate. The A5 came with 19" dual 5 spoke rims which are common in the S-Line range for most of the models but some how suits this car more than the A6 I had last year. The most noticeable difference in design comes in the lighting department with both the front and rear getting the new slotted style LED lights. This really does enhance the look of the and brings the model up-to-date in terms of the latest Audi styling. 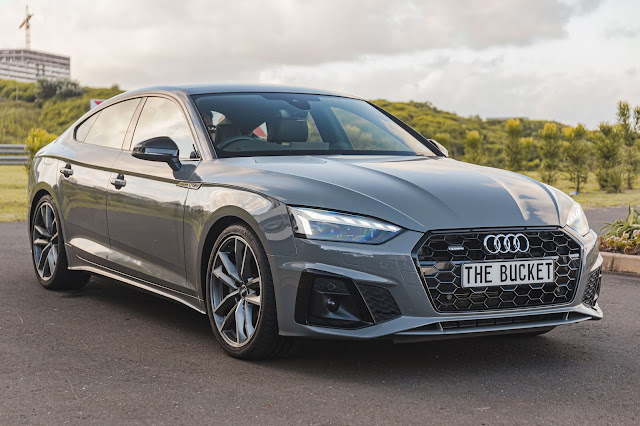 The 40 TDI motor fitted in this A5 was sublime for the car, its a 2L Diesel Turbo engine, produces 140kW which is the same amount of power as the petrol version but with an added oomph in torque as this generates 400Nm forward thrust. The Sportback is a big car, but with its low center of gravity and sleek design, it glides through the air when driving. The coupe like nature of the car also gives you more confidence to attack corners with more menace and with the Quattro drive system, has the necessary grip to keep the car in place. The gearbox also is calibrated perfectly to the various drive options, while many will opt for Dynamic seeing that it is the Sports setting from the driving modes, I found that Comfort was also pretty good when it came to power delivery and feedback, the car is very composed in all driving modes but again it depends on user preferences. 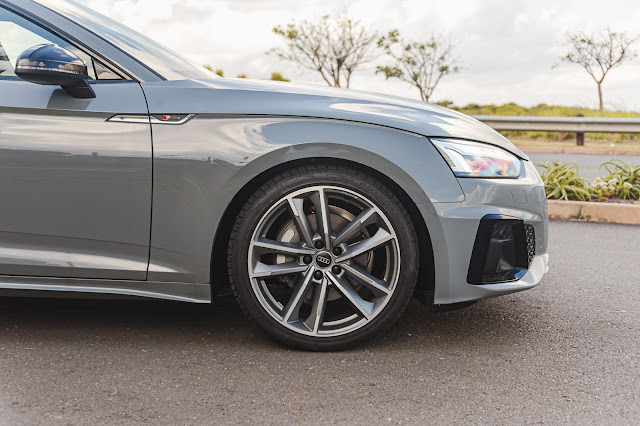 The Sportback being a sedan but based on a coupe format is not the easiest thing to get right but Audi have done this one brilliantly. While the car is quite low, there still is more than enough space for both the front and rear passengers. The tech and creature comforts that the car comes packed with will have all occupants very happy. The driver and front passenger enjoy dual climate control as well as heated seats as an optional extra, the rear passengers get a single zone climate control. While this particular model is still part of the old Audi design language, the interior still looks great and has the new updated large touch screen with Audi Connect and the new MMI interface, the car also has built-in mobile apps which has USB-C connections. This particular model came with Audi's virtual cockpit which I highly recommend, apart from it being super cool to see and use, the amount of information that can be viewed without causing distraction to the driver is immense. The car also had adaptive lighting which is another must have extra for me, as you get older and your eyes deteriorate, this will help in leaps and bounds. While the car is coupe based, with the huge hatch style tailgate, it allows you easier access to the luggage compartment which offers 465L of load space which is increased if needed by dropping the rear seats. 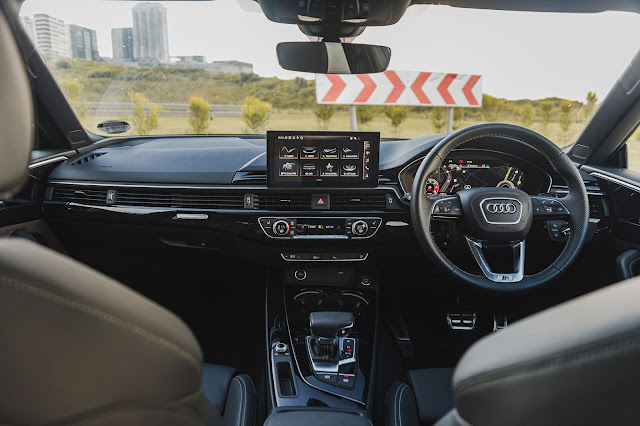 Well, overall the Audi A5 Sportback really is a great all-rounder, it has a coupe like feel but with the space and same number of doors as a sedan. The frameless look of the doors give it that sporty character and the sleekness of the design will ensure it generates attention wherever it goes. While its not the range topping RS5 the diesel engine offers great response and power when required, with the added bonus of great fuel efficiency. Which is sort of why I enjoyed this model so much and made saying goodbye to it all that more difficult.