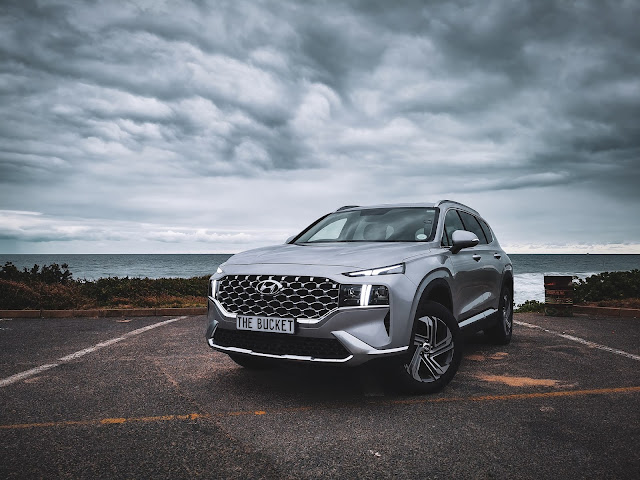 Hyundai's Santa Fe has been around for years and has always been the brands flagship SUV in the stable, that was until recently when the ginormous Palisade was launched locally but I'm not here to talk about that one, but rather the Santa Fe. Did you know Santa Fe means "Holy Faith" in Spanish? I just Googled that now because it is an odd name to give to a car, not sure of the Korean's are deep into religion or just like the town in New Mexico? Either way the latest rendition of this model see's a drastic change in design of the front which forms part of Hyundai's new design language and boy does it look good! Even though this model has been dethroned as their biggest model, the Santa Fe still does hold presence as I will elaborate on in the design aspect of this review but after spending some time in this car, its has its fair share of niggles but what you will appreciate is the honesty about itself and if you think it photographs well, you should see it in the metal! 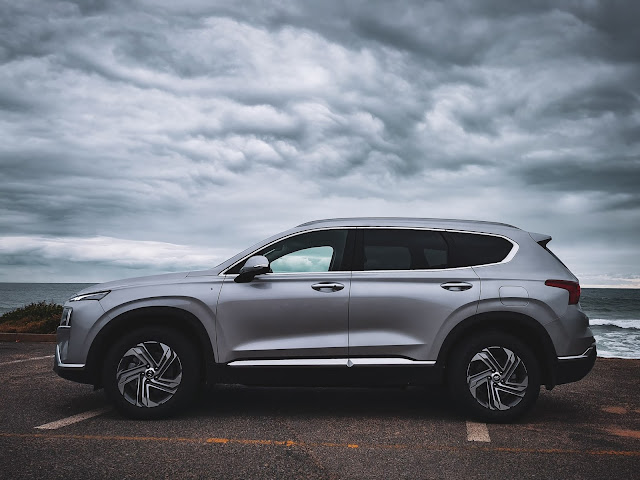 As mentioned just a few lines up, the new Santa Fe has presence, and that is thanks to the bold new styling of the front of the vehicle with that massive new grille, its finished off in a brushed aluminum like look and really is the cars most stand-out feature when looking at it dead on. From a glance it oks like a fishnet texture but upon closer inspection, it gives a metal chains look. The front headlamps are integrated with the lines of the grille that extend outwards to the sides but at split, both horizontally and vertically by the new LED daytime running lights when illuminated look like the letter T, not sure if this was a specific design aspect but it looks kinda cool. The whole design seems smooth and well though out, with just the right about of creases and folds, that make the appearance of the car rather  elegant. The wheel arches are well pronounced with an extra edging to accentuate the large rims, which are 18" alloys in a stylish 5-spoke laser cut pattern. Moving to the rear, that's where most of the old styling remains with a familiar rear lights which follow the crease of the car with a solid read piece linking the two lights. Additional reflective lights adorn the rear bumper with skidplates at the bottom to match the front. The interior of the Santa Fe has a very modern look to it, with a floating center console which is finished in leather and plastic. The patterns and styling of the cabin are very arty and easy on the eye. 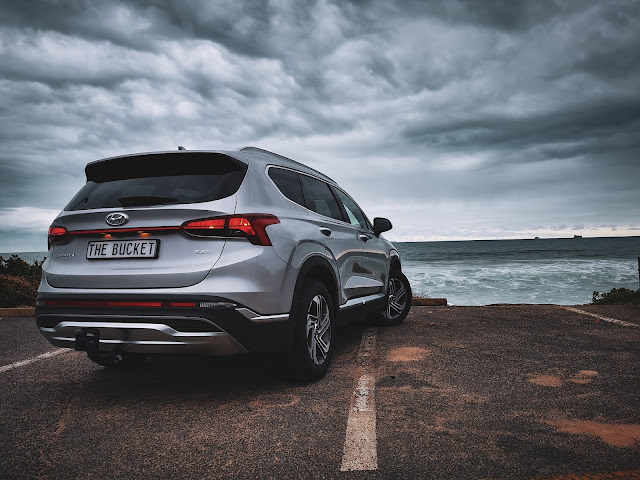 I had with me the 2.2D Executive model, which is the bottom of the two models offered locally. Its a front wheel drive SUV with a 2.2-litre diesel engine that produces 148kW and 440Nm of torque. The motor is tied to an 8-speed DCT box which isn't a CVT but I did have some niggles with at first with gear selection but that was mainly due to my heavy foot but over time I figured how to get the best from it. When driven properly the Santa Fe can give you between 8-9L per 100km, I managed to get it down to 8.2L per 100km on a long distance trip which I mainly used the cars cruise control to regulate the speed. The drive of the car is pretty good, given the size and weight you'd think there might be times when it would struggle but the car seems to get better as it goes. There were a few grips I had with the steering when full lock is done, you get a plastic knocking noise which annoyed me but it was soon forgotten as you straighten out and be on your way. 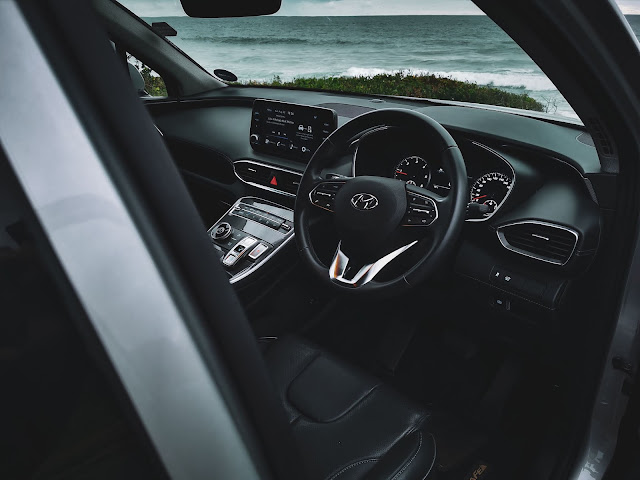 I don't think you can fault the level of comfort afforded to you in the Santa Fe, the seats are large and luxurious, with a diamond stitching upper which is also on the second row seating. It's expected to have this sort of luxury in a large SUV like this, the 3rd row seating is finished off in the same leather but are much thinner in-terms of cushioning. They're very easy to lift and fold back into space to allow for greater trunk capacity. They also feature cup holders as well as addition storage space for mobile phones or other items. Second row passengers get to enjoy two USB ports for charging, aircon vent which is controlled by the front, seat pockets for storage and electric windows and moving to the front, driver and passenger have dual climate-control aircon and a leather wrapped dash. The center console is laid out quite differently with the gear-selectors being push buttons, which are normally reserved for high-end sports cars but here are Hyundai adding them to their Santa Fe. It does get a bit tricky when you're not used to it but it's refreshing to see. The drive mode dial is large prominent with PDC and camera buttons clearly placed. The float console has additional storage below which features a USB port as well as 12V socket. The rubberised mat makes sure that items place there don't go sliding around. The cars infotainment screen is large and features pre-loaded mobile apps for ease of connectivity with a multi-function steering wheel to control all aspects of the cars communication and vehicle information. 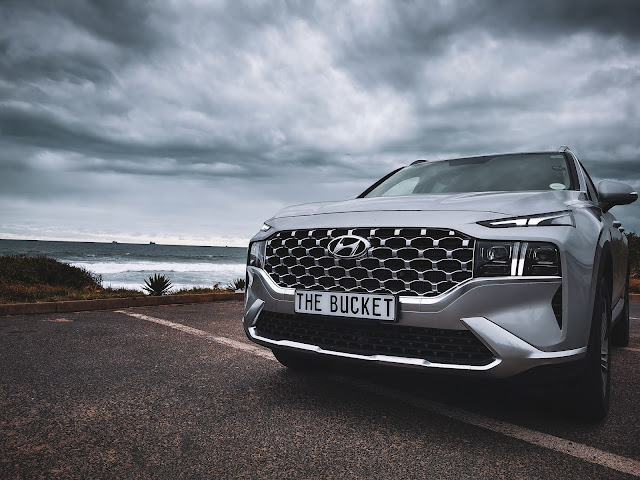 Overall the Santa Fe solidified its value in the Hyundai stable to me, its a luxury large SUV with comfort features and finishes that would normally cost you a lot of money in European rivals. The cars drive is a smooth one and leaves you refreshed rather than tired. The design of it is bold and eye-catching, it exudes presence on the roads and it gets the attention it deserves. While we know there is a bigger model available now from Hyundai, I still think this would be the ideal sized SUV for a large family, with the option of having the two extra seats in the rear, mind you much of the luggage space does get compromised with the seats being utilized. I really enjoyed my time with the Santa Fe but I'm still intrigued to see how the larger Palisade goes but I guess I have to wait for that one. 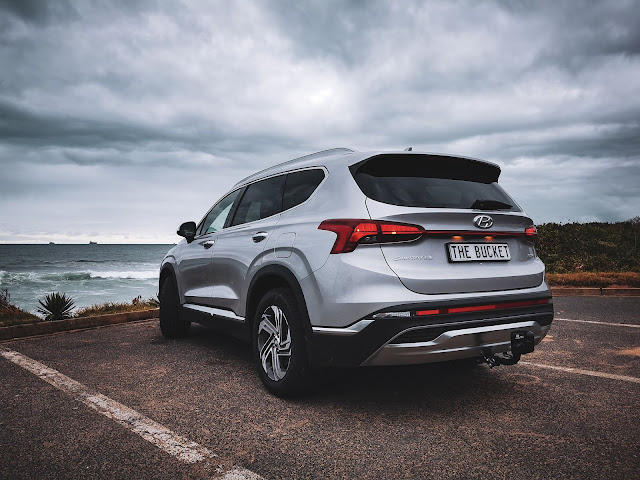