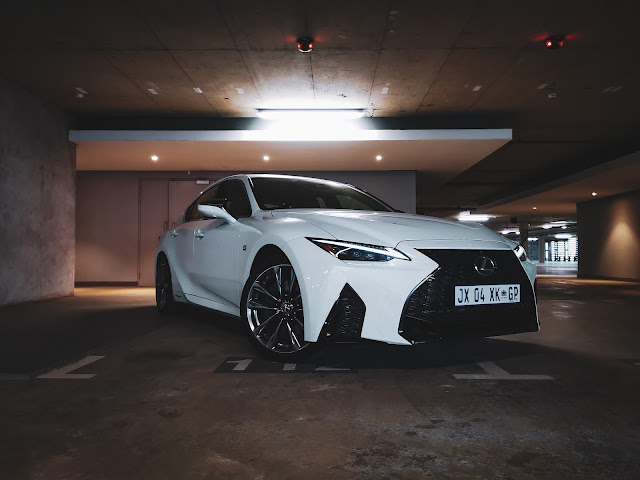 What is perfection? The online definition is "freedom of fault or defect, flawless", and Lexus tag line is the pursuit of perfection, which means they're constantly striving for it but not quite there. Then again, can anything really be perfect? In a world of varied opinions which many come under fire on a number of online platforms daily, it's safe to say that not everything can be everyone's cup of tea. That being said, after spending some time with the new Lexus IS300 Hybrid, their pursuit is noticeable because driving this third generation of their mid-sized sedan, its pretty damn near perfect if you ask me. 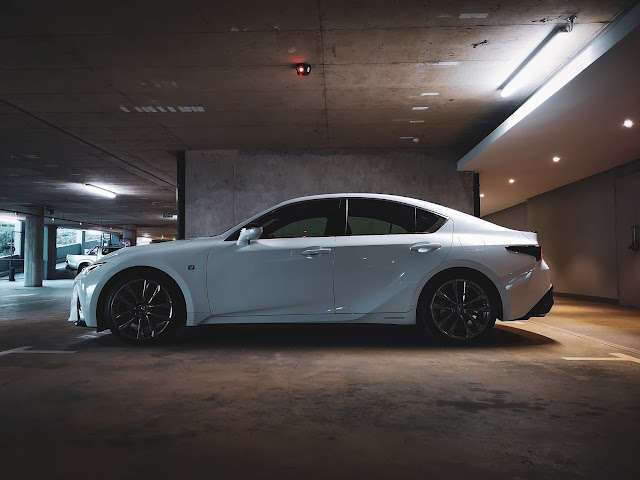 The styling is captivating to say the least, Lexus aren't afraid to push the boundaries when it comes to daring, bold and edgy design and we've seen that in the past 5 years with their new design language making concept to production very similar. From the eye catching large spindle grille to the sharp lines of the exterior and the dimensional interior, Lexus has put a firm foot in the sand saying they want to stand out and stand out they are. It almost seems as if they want to brush off this tag that they are a boring manufacturer and we know they aren't with the famed LFA which still holds legendary status in the Supercar realm. We've seen much of the tech that was made for the LFA passed down the line and make it into cars like the IS, and for that we are very grateful. The dynamic design of the IS is based on the previous generation model but on a larger like frame with even more extrusions and edges than before, it makes the car look dramatic even when standing still, the added F-Sport kit just exudes sportiness, with the blacked out grille, lower stance, 18-inch rims and a very sporty rear end which is accentuated by the new flat top boot lid and solid bar break light. 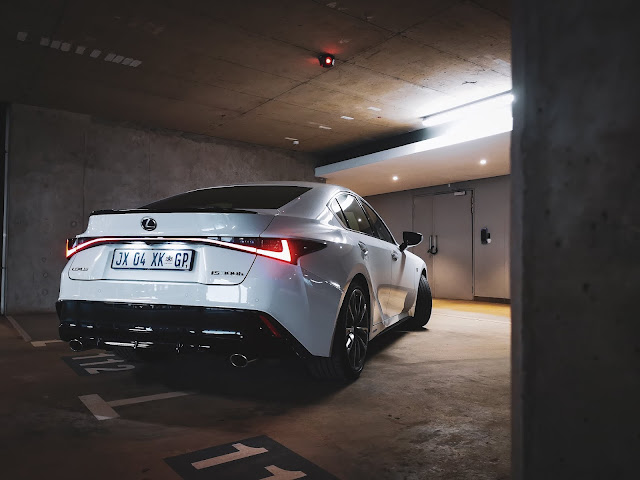 The IS has a host of textures and trims to kit your interior out in, this one was finished off in red leather which contrasted well with the black of the dash as well as the White Nova paint finish on the outside. It gave the car a sort of Ying Yang feel when looking at it from the outside then getting in. While we on the subject of the interior, it is well laid out and very similar to the outgoing model, with the major difference being a larger touch screen for the infotainment. The Lexus user interface has gotten better to navigate but they still have that track pad to navigate from, if this gets a bit cumbersome for you, there is comfort in having the touch screen to make things much more easier. There is also built-in mobile apps for Apple or Android devices, both of which have voice commands so most of the time you won't need to fiddle with anything. As with other models, the IS comes with a brilliant 17 speaker-Mark Levinson sound system which is like having an orchestra in the car with you, the quality is superb and its almost as if it adapts to the various music you listening too.  The driver cockpit is perfectly laid out and comes kitted with electric seats that have two memory settings, the digital instrument cluster is brilliant, while you can choose what you would like to be displayed, I personally loved how you have swap to have a minimalist look and with a touch of the button on the steering wheel, you can expand or contract the rev counter, its personally one of my favourite party tricks on this car. Also the various driving modes have different themes and colours to the dials, my personal favourite being Sport+ which mimics the LFA style dials. 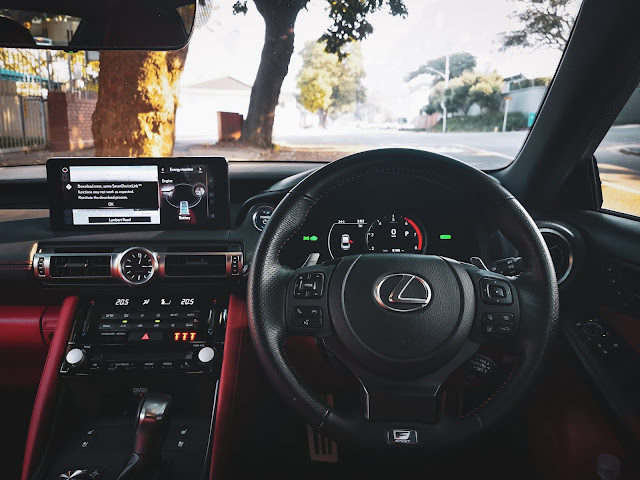 I could probably go on for paragraphs writing about the styling about this car but the people will want to know about the the inner workings of the car, especially that Hybrid drive train. Lexus are probably one of the leaders in Hybrid technology since they've had it in most of their cars for the better part of the last 5-10 years. It's no different with the IS300h, The combined power from the 2.5-litre petrol engine and the nickel-hydrogen battery system is 164kW and torque is rated at 221Nm. An Electronically-Controlled Continuously Variable Transmission (ECVT) maximizes both efficiency and performance. While the ECVT does pose the same problems as a normal CVT at times, it does feel a bit better handling this sort of system with the electric engine compensating for torque when the gearbox battles with the gear selection. When Sport/ Sport+ is selected, much of the lethargic nature of the gearbox soon disappears, the car clocks a 0-100km'h time of 8.7 second which is nothing to write home about but you have to understand that with the added weight of the batteries and electric motor, that is quite decent. Also this isn't the performance version of the IS with an IS500 that features a NA V8 that has launched in the USA being the one for performance enthusiasts. 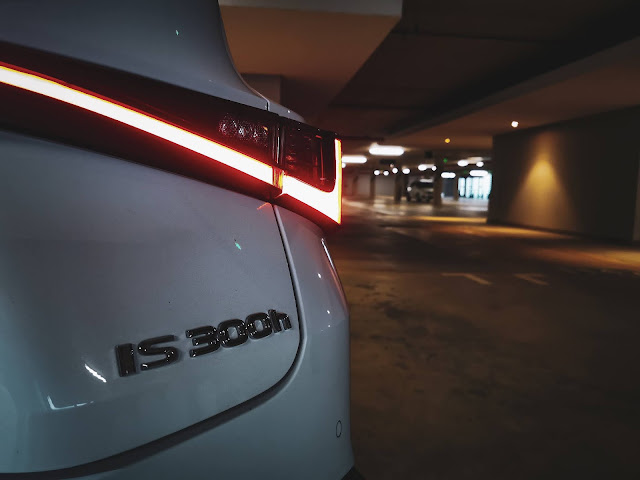 As a given with Lexus, safety is uncompromised with the IS300h boasting a host of safety features as standard. Just running through some of them, they include a pre-crash system with enhanced radar and camera that has intersection support that can detect moving objects that would be moving towards your trajectory that  triggers the automatic brake system if you haven't already. Lane tract assist keeps the car in the lane, which comes handy in poor visibility settings. All-speed adaptive cruise control which maintains a set following distance to the car in front of you, adjusting the speeds to keep that distance and even bringing the car to a complete stop if needs be. A personal favourite of mine is the LED auto-beam headlights which provide superb visibility at night and roads which are poorly lit. Blind spot monitoring for when you're changing lanes and lastly, park distance control with clearance sonar as to warn you if there are cars coming when reversing. 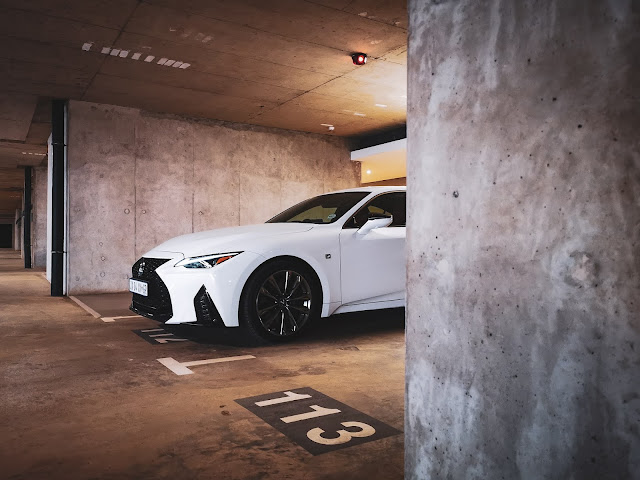 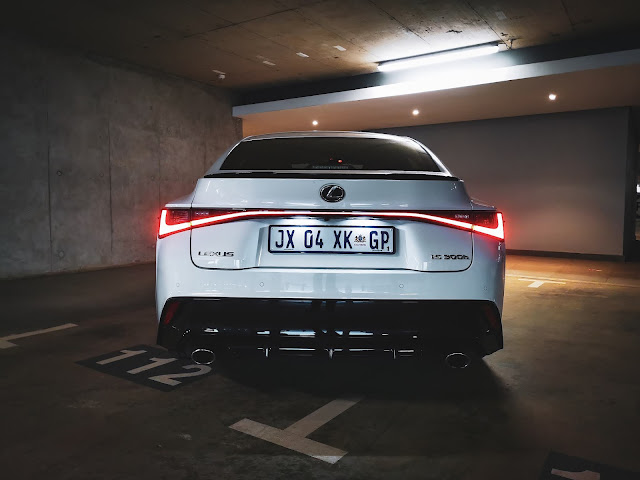