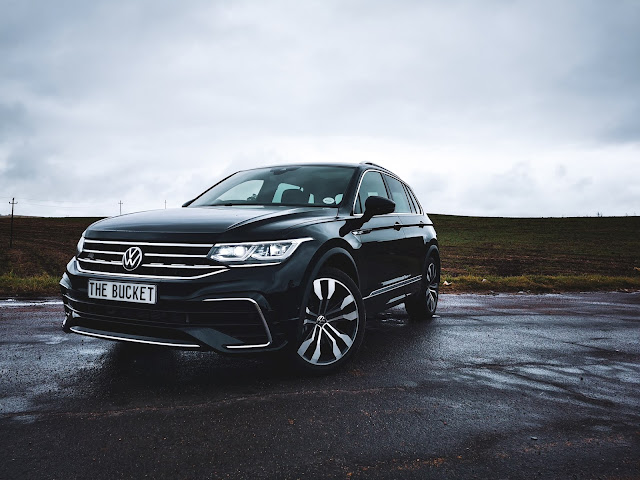 When it comes to midsized family SUV's in South Africa, a firm favourite amongst many is the VW Tiguan. Volkswagen seem to have come up with the perfect formula for the Tiguan, one which appeals to everyone! I've not met one person who doesn't like the car, even with its high price tag, people will still opt to purchase this vehicle by hook or by crook, managing to find a way through various financing options available to them. So while I can understand the fascination created by this car, I really wanted to understand what has people so fixated on the Tiguan, why it makes people get that "must have" attitude towards it, after spending a week with the latest revised R Line version of it, I managed to deduce the following. 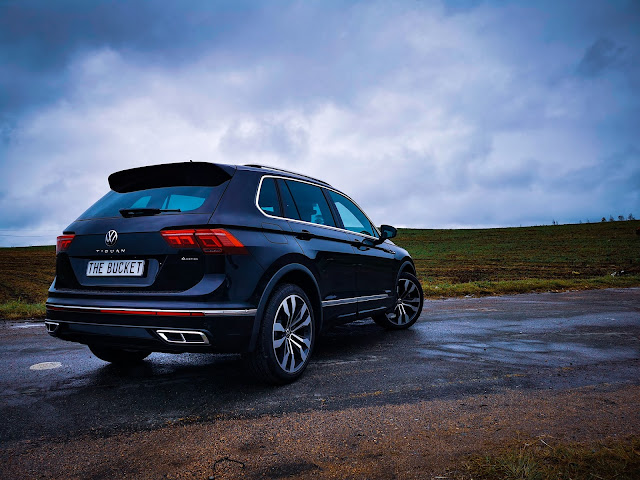 Lets start with the looks, I mean the previous model was a really good looking car already but this face-lift is like it went to a plastic surgeon for minor tweaks like some fillers and botox and came out looking like a supermodel. My God this car was fantastic to look at from every angle.  The colour, Deep Black Pearlescent just accentuated the R Line styling package and gave it that menacing look. The details of the design with the chrome beading a subtle red accents made the overall look of the car just so fantastic that at times you couldn't take your eyes of it. The changes include a revised front end with a new headlamp design in keeping to the new VW design language, that has this swooping like shape that extends into the side profile of the car, housed in these enclosures are Volkswagen's new IQ Light system which I'll discuss a bit later. As usual with face-lift models, there are subtle differences to the grille with a larger VW badge and lower bumper and diffuser, with chrome detailing outlining the key shape changes of the front end. Everything looks bolder and smoother than the previous model. On the side profile not much has changed apart from the front changes that wrap around. There is some extra beading in a brushed aluminium prominent on the doors. Moving to the rear, the rear lights also get the IQ light treatment with some new LED's. As per all new VW models, the model badge is now bolder and centrally positioned on the tail. The R Line package has the rear diffuser much lower and neatly designed quad tailpipes to end it off at the bottom. My one gripe would be the choice of rims as that bar some change in colours remains the same from the previous model. 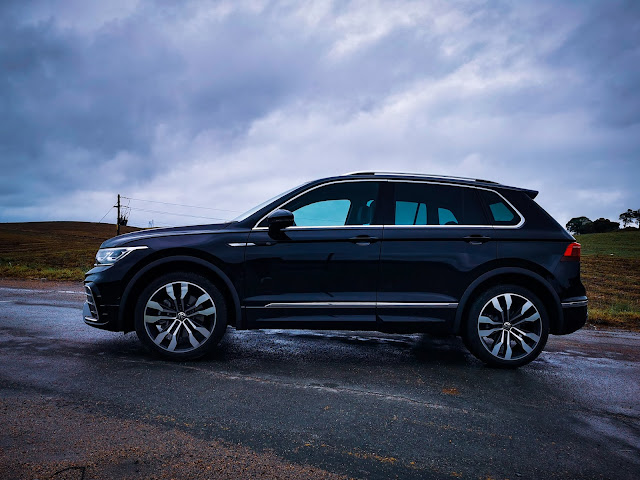 The Tiguan is powered by a 2.0 petrol TSI engine, the same in which you'd find in the new GTI, but this one obviously down tuned to suit the body shape, it produces 162kW with 350Nm of torque. The power to weight ratio in this model is perfect as the motor delivers exceptionally well to propel this large vehicle around, it boasts a 0-100km/h time of 6.5 seconds which for a family SUV is impressive. The marriage between the motor and the 7-speed DSG gearbox is sublime as ever when it comes to VW's. The synergy between the two hardly has the engine overworked as the gear changes are smooth and efficient, that along with the four wheel drive system in 4MOTION make navigatinf with the Tiguan simply a breeze in any circumstance. Though with such great power delivery, especially in Sport model you do tend to get carried away with it and that doesn't help the fuel economy in this thing, so you'll see your range deplete quite drastically in this 60L tank, Volkswagen claim a combined feul average of 8.3L per 100km which is achievable in ideal driving conditions. Car copes well in all types of environments, especially in the urban setting which is probably why it's quite popular for mums on the school run, or any family type environment. Then again with its new age design it also passes off as a swanky business type SUV. 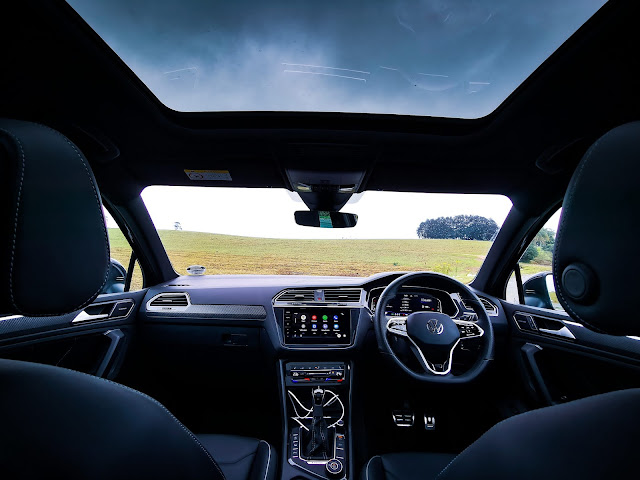 Like most new models, the Tiguan came loaded with optional extras which I'm sure don't come cheap, VW didn't put the prices on any of the listed extras on my list but when building your car on their website it wouldn't be too difficult to find. My favourites included the new IQ light system with Matrix LED, that's basically adaptive technology and high beam assist, it is a MUST for all new cars going forward. I know I'm pretty much an advocate for this tech but seriously, visibility at night cannot be compromised and once you experience this, there really is no going back. Being the R Line, it comes with a host of sporty features with the kit, also gives the car a more edgy look so that's a definite tick in my books. The large panoramic sunroof is another firm favourite of mine, the sheer size of it is amazing and the amount of natural light you get in the cabin just brightens up everyone's mood, no pun intended. The IQ drive system is another must for driving packages as it includes your safety features such as adaptive cruise control, park assist, lane departure warning and collision warning. VW's premium sound system is now catered for by Harman Kardon, these guys know their sound and have curated a perfect speaker system especially for the Tiguan. With the new touch screen interface, it includes a host of new features, my favourite being in car WiFi which enables wireless mobile phone connectivity for apps such as Apple CarPlay and Android Auto, so you don't have to fiddle with cables anymore. Should you wish to plug in your USB's make sure they're USB C as the there are two ports up front as well as in the back for passengers to charge their devices. There is also a wireless charging pad for the front passenger/ driver. The Tiguan comes with dual zone climate control seat heating as an optional extra for the driver and front passenger. Luggage space is plentiful, with standard capacity at 520L and with the rear seats folded extends to 1,655L. 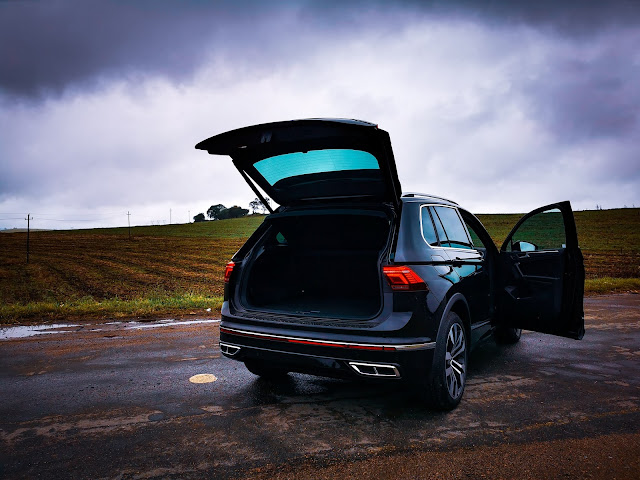 It's difficult not to see the appeal of the Tiguan, especially for South Africans and their trend shift to SUV's at the moment. It's a great looking car, very trendy and has everything that one requires in this modern age of motoring in terms of technology and power. While the price has escalated significantly over the years, you know you have the backing of the brand on the vehicle which includes great build quality and service, I guess this is why people tend to not argue to the price point and opt for this over other models on the market. With the influx of Asian brands in the market, VW might find it a bit difficult going forward as locals get adjusted to the new models at much more affordable price points. It's definitely thrown a spanner in the works for many of the Germans who still rely on brand loyalty and status preference. 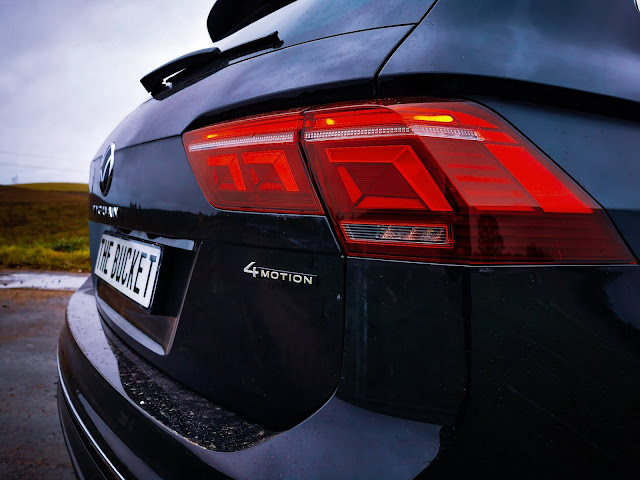