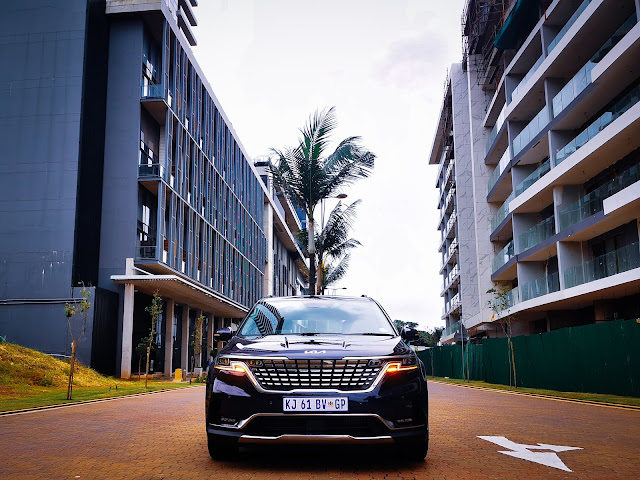 When I was a kid, a MPV's were not very popular in the car market, in fact I struggle to think of one other than the larger mini-buses where the Toyota Hi-Ace and VW Kombi/ Caravelle dominated the market. The introduction of smaller people carriers soon started to creep in with some manufacturers tinkering with the design of these mini-buses but to cater a smaller passenger load, while there was nothing fancy or distinct about these, they seemed to served their purpose of providing a larger vehicle with easy access for passengers and ample of luggage space. As the model evolved, some companies saw an opportunity to create exclusive luxury models of them and it made perfect sense. The cabin was large and spacious, so room was no issue. Instead of having large flat bench seats, they could experiment with larger single seats, and create a super limo MPV, as we've seen in the likes of the Mercedes-Benz V-Class and VW Caravelle. KIA has also been a key player in this segment with their Grand Sedona providing this offering to many at a much more affordable price when compared to the to the other two brands, they've recently launch the latest variant of this vehicle in the country and its been renamed to the Carnival and I had the opportunity to spend a week with it, here are my thoughts on it. 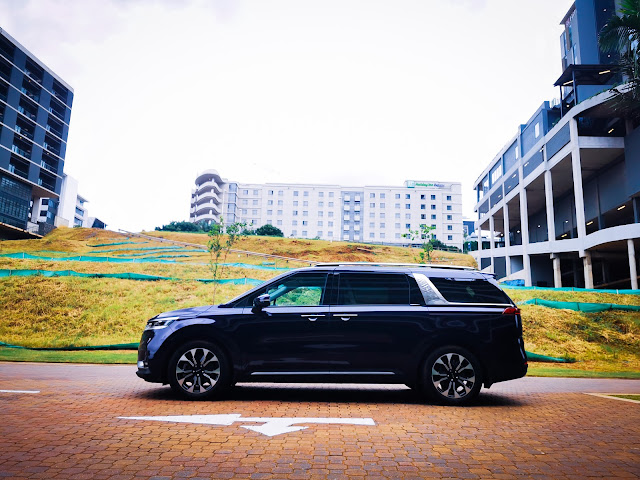 The design see's a major shift from the older Grand Sedona with KIA's new design language coming in strong. The car seems to have a lower and wider stance that its predecessor, while you can't escape that distinct MPV look, I have to give props to the KIA design team to add bits and extras to make this model really stand out. Starting with that grille which dominates the front end, finished in chrome it really is a stand out feature of the car and it's where the design for the rest of the car takes shape. The grille isn't even a solid component as its made up of quite of few of these chrome blocks that lead into the front headlamps. This to isn't one component, as its also segmented but all worked into the design as it blends in with the chrome accents of the grille. The day-time running LED lights has this new signature styling which underlines where the lighting pods sit on the front. The air intake for the radiator has a brush aluminum finish with  the front scuff plate having the same detail. Moving onto the side profile, the car has a more flat box shape to it, making it look compact. With a large passenger sliding door that has beautiful chrome pillar to divide the window and door. Its another eye catching feature on this car that adds that extra element of luxury and exclusivity to the model.   The back see's some of that front design transpired in the back with similar lines worked into the solid LED bar light on the back. The roof line extends out into a spoiler over the rear window and tailgate. It's an ultra modern design that had quite a few heads turning, even mine every time I parked the car and walked off. 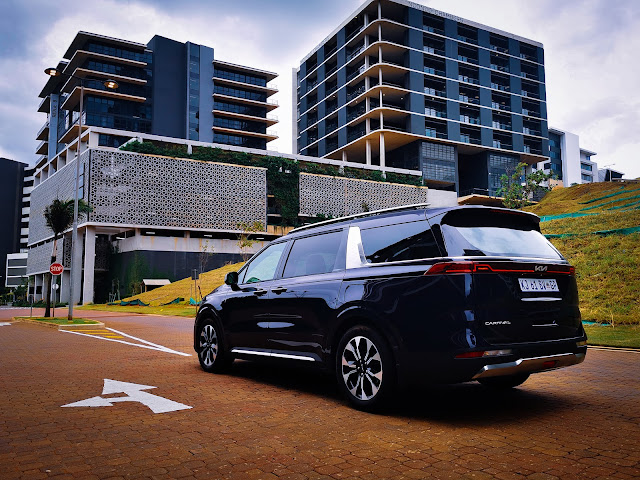 The Carnival comes powered with a 2.2L 16V CRDI motor that produces 148kW and 440Nm of torque, weighing in at just over 2 tonnes without passengers, the motor does pretty well to propel the large chassis around more than comfortably. The day I received the car, I had planned a trip to the midlands with some visitors from Mauritius, it was the ideal type of car to go on a road trip with. Enough space for everyone to sit in comfort but more importantly, that diesel engine really shows its class on long journeys with me averaging around 9L per 100km and the range giving me almost 900km to the tank, this average didn't really change much even during my time doing urban drives with the car, the 8-speed automatic gearbox has much to do with this achievements by going through the gears optimally and not holding high revs on any particular gearbox when not needed. The Carnival also has paddle shifts on the steering wheel which I never used at all as I didn't have a need for as the gearbox was always perfectly fine. While the fuel tank is large at 72L, it's not as big as some of the other competitors which are closer to the 80L mark but giving the same sort of economy figures. 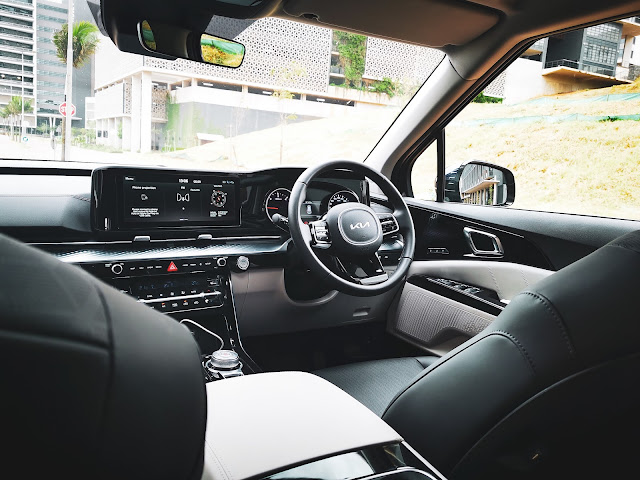 Where do I even begin with the level of comfort in this car? I compared the Grand Sedona to the likes of a private plane, this is one notch higher with it having all the modern tech. To start off with the, the gear selector is a round dial which you turn to select what gear you'd like to be in and push button to park. This is finished in crystal like Perspex with chrome accents, it really looks fantastic. The dash is finished off in a mixture of leather and high-gloss plastics, all which feel very good to the touch. The instrument cluster featuring dials and a 4.2" cluster screen displaying vehicle info and a massive 12.3" infotainment screen that has all sorts of features including climate control for the entire cabin, built-in phone apps and much more. The front passenger and driver get dual climate control with seat heating and cooling. The second row seating was two individual seat configuration with arm rests, they had their on climate control screen for the cabin temperature. The Carnival has dual sunroof for the front and back passengers. All windows are electric and the rear passengers of built in blinds for privacy or just to keep out the sun.  All the seats have USB ports for charging with the front getting three and one wireless charging pad. There is ample storage compartments and cup holders for all sorts of beverages. The luggage capacity even with all rows of seating up is massive, measuring in at 1139L and with the third and second row seats tucked away, it extends to 4110L! 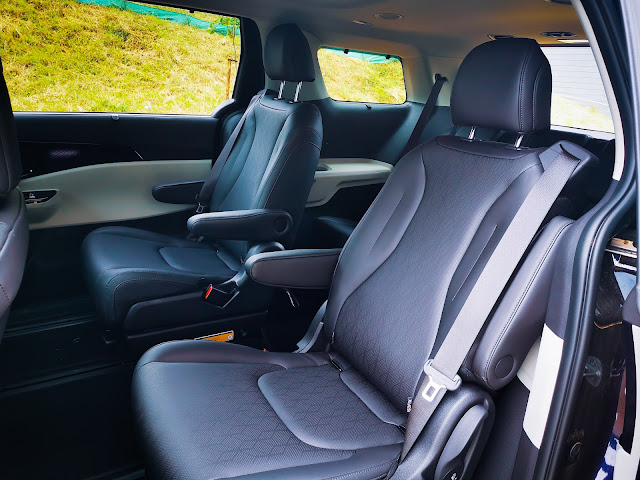 Overall, I was blown away by the KIA Carnival, it really is a great luxury MPV offering from the brand, not only offering the same level of comfort as the Grand Sedona but exceeding it in many aspects. While big in size, driving the Carnival around didn't feel cumbersome and parking the car was fairly easy with all the driver aids present, like front and rear PDC's as well as all-round cameras.  The ride quality is smooth and something that you expect from luxury European cars, safety is up there with them as well. The design and layout of things in the cabin just makes sense and is very user friendly. It really is a great offering from the Korean brand, one that I've thoroughly enjoyed my time with and from what I've seen on social media, many of my motoring colleagues are sharing the same sentiments. 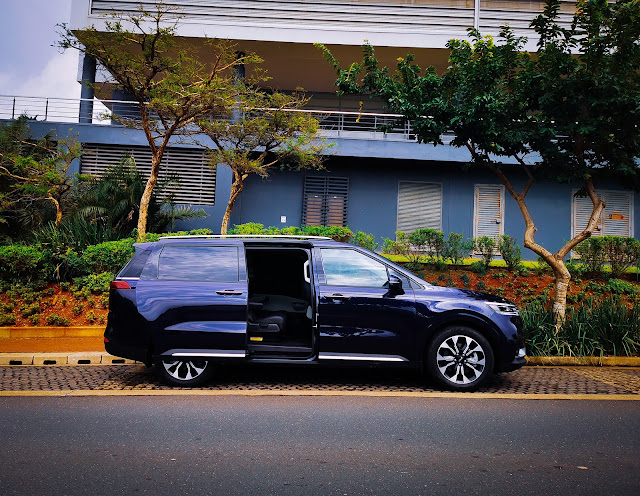